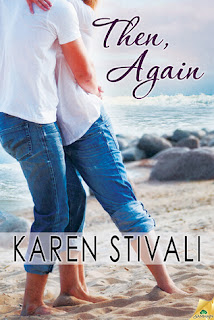 Then, Again
by Karen Stivali

Blurb: Sometimes you have to lose it all to find what you really need.

Photographer Kay Turner is dealt a double whammy when she flies home for her grandmother’s funeral to find her boyfriend with another woman. Now with two losses to mourn, she retreats to her newly inherited beach house to clear her head.

Everything at the beach is familiar: the sounds of the ocean, the scent of her grandmother’s perfume—and the irresistible smile of James Margolis. The man Kay spent her adolescence pining for is every bit as charming as she remembers.

James always thought of Kay as “a nice kid”, but he feels something very different for the woman she’s become. Especially when he asks if she’d be willing to part with some of her grandmother’s recipes for his new restaurant—and they wind up sharing much more than culinary secrets.

But as their relationship deepens, Kay finds herself caught between the demands of her dream career as a travel photographer, and a chance for happiness with the one man she’s wanted for a lifetime.

My Review:
As I was looking for some more Foodie romances Anna from Herding Cats and Burning Soup recommended me this book. The blurb sounded interesting and I immediately bought it. Then, Again is a sweet romance, with also quite a few more heated scenes.

Whith romances it seems like the main storyline is always a bit predictable, that was also this case in this book. Although while most of it was predictable there were also some nice surprises, like the ending. The story starts when the main character, Kay, has just lost her grandmother and I really could feel her emotions, the death of her grandmother plays an integral part in this story, but most of it isn’t sad. I liked the beach setting and the story was enjoyable and I read the book in a few sittings. It was a nice and enjoyable read and I really liked it.

The characters are done well, but I would’ve liked getting to see some different sites of the characters a bit more. For example Kay is a photographer, but there are hardly any scenes where she takes pictures, they do talk about her pictures and sometime sit is mentioned afterwards that she took pictures, but there aren’t scenes where she is actually taking these pictures. I felt like I didn’t really feel her passion for photography. The same was true for James who starts a restaurant, but while it was obvious he liked cooking, I didn’t really feel his passion for cooking and his restaurant.

The romance was done really well, they don’t take too long before they took their relationship to the next level, but it felt really natural. Also they have known each other since they where childs, so that makes romance develop a bit more quickly usually. I really felt the love for each other. But there where some scenes where I wanted to shake the characters and tell them to please talk about things, because while they certainly love each other they didn’t seem to get around to really talking with each other as often as I would’ve liked. The ending was really sweet and I really liked how this book ended.

To conclude: this was an enjoyable and sweet romance, with also some sex scenes. I liked the storyline and how the romance developed, but sometimes I wished the characters would talk to each other a bit ore and I didn’t really felt the character’s passions for their careers. Overal a nice and enjoyable book with a nice ending.

You can add Then, Again to your to-read list on Goodreads

2 responses to “Review: Then, Again by Karen Stivali”