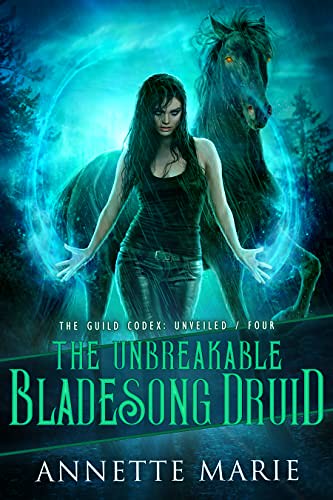 Blurb:
The heartrending conclusion to Saber and Zak’s story…

Ten years ago, everything that mattered to me was torn away—and I let it happen. But this time, I’m not a scared teen or a helpless witch. I’ll claw back everything and everyone I love, no matter the cost.

I am the Bladesong Druid, and I won’t stop. I won’t relent. I won’t break.

The Unbreakable Bladesong Druid is the fourth and last book in this series. It wraps up the story of Saber and Zak. There are also plenty of cameo appearances of other characters from the Guild Codex world. I thought this was a great ending to the series. The pacing was well done, plenty of action and some great twists and turns. I liked seeing how much Saber has grown throughout the series and the ending was great. I was especially happy with a certain twist at the end.

This book starts shortly after the end of book 3 and quickly dives into the action with more issues popping up for the characters to solve. The pacing is well done and things keep happening and progressing. I liked how there are some major progression event throughout the book and not only toward the end. The build up to the ending was well done and there was an great action scene at the end and I was pleasantly surprised by the turn some events took.

I didn’t really like Saber when I first started the series, but she turned into an interesting character to read about. I thought it was great to see her grow and change and develop throughout the series. She really grows into her own person and handled things better while still staying the same in some ways as well. I liked seeing her fight for what she believed in and the courage to open up toward Zak. It also was great to see her realize she doesn’t have to do everything alone. I enjoyed following her journey and seeing her find peace and happiness.

There are a bunch of cameo appearances of characters from the other Guild Codex series like Kit, Tori, Ezra, Aaron and Kai. They all play an important role in the story. And ofcourse Darius makes an appearance as well. I liked seeing more of Rikr and the other fae creatures, like the horses and vargs. I really enjoyed learning more about the fae and druids in this series.

To summarize: This was a great ending to the series. There’s plenty happening and the pacing is well done and then it all builds up to an action packed conclusion. There are some interesting twists and turns and I really liked seeing how everything got resolved. While Saber wasn’t the most likable character for me at first, she has grown on me and I enjoyed following her journey and seeing her change and develop throughout the series. There are some great side character, both human and fae. As well as some fun cameo appearances of characters form other Guild Codex series. All in all a great ending to this series.

4 responses to “Review: The Unbreakable Bladesong Druid by Annette Marie”