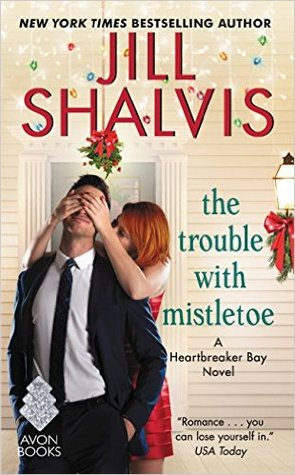 The Trouble with Mistletoe (Heartbreaker Bay #2)
by Jill Shalvis

Blurb:
If she has her way …

Willa Davis is wrangling puppies when Keane Winters stalks into her pet shop with frustration in his chocolate-brown eyes and a pink bedazzled cat carrier in his hand. He needs a kitty sitter, stat. But the last thing Willa needs is to rescue a guy who doesn’t even remember her …

He’ll get nothing but coal in his stocking.

Saddled with his great-aunt’s Feline from Hell, Keane is desperate to leave her in someone else’s capable hands. But in spite of the fact that he’s sure he’s never seen the drop-dead-gorgeous pet shop owner before, she seems to be mad at him …

Unless he tempers “naughty” with a special kind of nice …

Willa can’t deny that Keane’s changed since high school: he’s less arrogant, for one thing—but can she trust him not to break her heart again? It’s time to throw a coin in the fountain, make a Christmas wish—and let the mistletoe do its work …

My Review:
I really enjoyed this book! After reading book 1 I was excited to get Willa her story. This book takes place around Christmas time and that adds some nice Christmas cheer to the story. It’s not overdone, but it did make me imagine how festive everything looks. I think this is my favorite book in the series so far. Great characters, a nice group of side characters and even some pets full of personality. I had a lot of fun reading this book and was a bit sad when I finished reading it.

The main characters in this book were both such likeable and awesome characters. Willa didn’t have the best time growing up and now she is this person with a lot of love to give, a big heart and smiles for everyone. She helps other animals and people in need. Like Rory who works at her shop. It was fun to see their friendship and dynamic. There’s also a few fun scenes with Edie, who is such a fun side characters. It did make a me a bit sad to see how she had this big heart, but at the same time was also so afraid to fall in love. That’s the main conflict in this book having her overcome her own fear and reservations. I also liked how she worked in a pet shop, it made for some great scenes and I like how much she cared about all the pets.

And while I liked Willa, I might like Keane even more as a character. He was just such a good guy. Just like Willa he didn’t have the best time growing up, but he made a life for himself. He doesn’t have a home or many people in his life. Then his aunt dumps her cat Pita with him and he meets Willa and that’s all about to change. I loved seeing the change in him, how he thought he was okay without anything or anyone close to him, but then opened his heart. There is a great scene were he overcomes his fear of heights to help Willa, I loved that scene. He was so patient, honest and loving with Willa and I liked seeing that.

I also liked reading about Pita. Pita is the cat of Keane his aunt that he takes in and he can’t stand her and the feeling seems mutual, although that does change a bit over the course of the book. I loved seeing that and how Pita wormed a way into his heart. I also felt a bit bit nostalgic and sad while reading this as the name Pita reminded me of one of the pet rats we used to have who was called Pita (she was called after the bread though). And she had just as much personalty as the Pita in this book.

I really liked the romance between Willa and Keane. I wasn’t a fan of the bit of conflict at the start where Willa blamed him for something that happened years ago and he didn’t even remember. It just felt a bit of unnecessary drama, but luckily it got resolved quite fast and not dragged out too much. Besides that it’s just a fun slow building romance, with a bit of instant attraction that they eventually act upon, while they slowly fall in love. These two were just so fun to see together and they were so good for each other. I really enjoyed seeing them fall for each other.

There is something that happened at the end of the book that I wasn’t too happy with as I had predicted that would happen from the start and then it did and I was so hoping it wouldn’t. But I did like how things got resolved after that and how the conflict didn’t get dragged out. I just wish the ending had been a bit longer as I would’ve liked to see more and it just felt a tad rushed now. Or maybe I just wasn’t quite ready to say goodbye to these characters yet.

And ofcourse we get to see the group of friends again. It was fun to See Pru and Finn again, the couple of book 1. And we also see more of Elle and Archer who will be the couple of book 3. I am looking forward to their story. It is just so heartwarming to see how close this group of friends is and how they always have each others back. We get to know Rory a bit in this book, who has her own novella and I hope to read that soon.

To summarize: I really enjoyed this book. The Christmas feel was well done and added a festive feel to the book, without it being overdone. I really liked both Willa and Keane, both were great characters. I really liked each of them as a character and I liked the together. They made for a great couple and I enjoyed reading about them. Keane seems closed off as first and is a bit of a loner and it was wonderful to see that change. Willa has a big heart, but she is afraid to fall in love. I also enjoyed seeing this great group of friends again and how they always have each others back. The new side characters in this book were fun too, I liked getting to know Rory. And the cat Pita was a such a fun addition as well. Overall this was a great read with a bit of holiday cheer sprinkled in, but above all a wonderful romance between two great characters.

Did you read any Christmas themed reads this year?

26 responses to “Review: The Trouble with Mistletoe by Jill Shalvis”