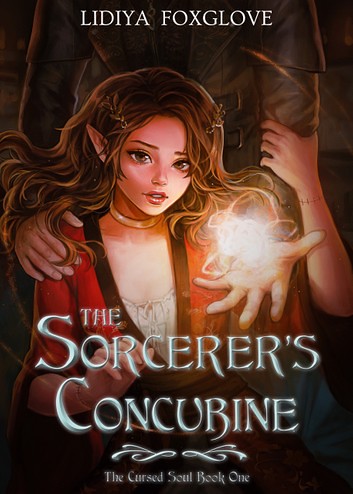 The Sorcerer’s Concubine (The Cursed Soul #1)
by Lidiya Foxglove

Blurb:
Born of wood, cloth, and a substantial dose of magic, Velsa is a Fanarlem, a beautiful artificial girl. Raised to be a concubine, told that her soul is damaged and fated to serve others, she has seen her friends at the House of Perfumed Ribbons sold off to be the pets of wealthy men. Now her own dreaded day has come.

Grau Thanneau is a sorcerer who expects to own a spectacular piece of spell work–he doesn’t realize that everything he has been told about Fanarlem is a lie. Velsa is not a dull-witted doll, but an intelligent and luminous girl who captivates his heart. Grau would throw away everything just to keep Velsa safe, but he can’t control the larger forces swirling around them—nor shirk his duty to serve in the border patrol, where concubine dolls are allowed to keep the men out of trouble with Miralem female spies.

There is a land where Fanarlem aren’t treated like slaves—and it’s in the nations of their enemy. The Miralem people to the north have terrifying powers to read and control minds, to heal or destroy. And they share this power with the most rare and terrifying creatures of all—the dragons.

Some Fanarlem are born with these telepathic powers as well, and Velsa is one of them—her powers locked by a golden band around her neck. All her life,her ability has been suppressed and untrained. War is brewing, and when the enemy attacks, Velsa might be the only one who can stand against the Miralem and the dragons. Grau would never be welcome in the Miralem lands, but when a life with him means she will always be treated as nothing, how can she choose?

I was really excited for this book. Not only is it written by Lidiya Foxglove, but it’s another fantasy romance books which I like and it would be the first MF romance I’ve read by this author. Having said that I wasn’t quite sure what to expect in terms of plot. This book took me by surprise in the best possible way, I needed some time to get used to the concept, but once I did I fell in love with this book. This might be my favorite book by this author yet!

The Sorcerer’s Concubine is told from the point of view of Velsa, the concubine. The prologue is written from Grau’s point of view, the sorcerer mentioned in the title. Grau buys Velsa because he falls in love with her at first sight. This story has an unique twist on some more common plot lines. Velsa is a soul put into an artificial body, which reminded me a bit of the set up for some science fiction books, but this is the fantasy twist on it. These artificial bodies are called Fanarlem. Velsa’s body is made from wood and stuffing and magic. Thanks to the spells she looks almost like a real person.

People in this world believe that only cursed soul can reside in Fanarlem bodies and so they believe it’s okay to abuse these Fanarlem and use them as slaves. This book made me uncomfortable at times with how everyone treats these Fanarlem and at the same time it shows so clearly how such a deep-rooted belief can stay existing and no one ever questions it. Except some do and I really liked that part. I liked how we see Velsa and Grau questioning these beliefs and even some of the side characters they meet, but it’s also clear the danger this brings them in.

Grau and Velsa’s romance starts off a bit weirdly as she is literally owned by him. This is also addressed in the book and it takes a while before Velsa really starts to believe Grau is truthful and honest with his intentions. I felt so bad for Velsa with how she was treated by everyone, so it was wonderful to see Grau treat her with respect and give her choices. I just loved their romance. It was complicated at times, but also felt very sweet and realistic. The way Grau would do anything for her and went out of his way to protect her even at the cost of his own safety. How he struggled with what he had been taught for so long, but Velsa was proof that those beliefs were wrong and he slowly sheds his long held beliefs. I actually liked how some of those beliefs take a while to fully fade, it feels realistic and it was interesting seeing him struggle with what he had been taught and then what he sees in Velsa.

I also really liked Velsa the way she is a little bit rebellious and always has struggled with what she has been taught, but also knowing she can’t voice those things. And then when Grau slowly gives her a voice and fights for her, it’s beautiful. I also liked that at times she still has her doubts and fears. These two were just so awesome together.

The whole idea of Vels being in an artificial body weirded me out a bit at the start, but as time went on I became to find it such an interesting and unique aspect of this world. We learn about how these bodies are made and how they can repair them. The benefits of having an artificial body, but also the downsides. And the prejudice from everyone against these souls who live in artificial bodies as they believe they are cursed.

Besides that there is quite a lot of world building. There is an impending war, rumors of dragons, magic, a strong ruler, telepathy, shapeshifting and other races. It all forms a fascinating fantasy world, that feels fresh and unique. I like how parts of it felt very modern like the artificial bodies or the way they flesh and blood people can hire shapeshifters to change their own bodies and make them longer or remove their winkles. Then other aspects really had that fantasy feel with the magic and sorcerers and the army Grau has to join. It was such an unique combination of elements and I really liked getting to know more of this world.

To summarize: I really enjoyed this book! It might be my favorite book by this author yet. While it took me a bit of time to really get into the story, once I got used to this new and fascinating world I was hooked and just wanted to keep reading. The story could be sad at times and made me uncomfortable at times with how people treat Velsa as they believe her soul is cursed. And at the same time I thought it was a very beautiful story with how Velsa and Grau fall in love and how Grau fights for her. The concept of artificial bodies in a fantasy world was really interesting. I liked Velsa and her spirit. She has had a hard upbringing and struggles to trust Grau’s intentions, but once they grow closer and Velsa slowly begins to believe he really is such a good man, it’s really awesome. I really loved the romance between these two and how Grau stood up for Velsa and even struggled with what he had been taught and his own beliefs. Their romance is complicated and difficult at times, but it’s also very beautiful to see. The world building is really interesting with a mix of almost more modern elements and more traditional fantasy elements. It made for a great combination and interesting world. I can’t wait for book 2 to see how their story continues.

4 responses to “Review: The Sorcerer’s Concubine by Lidiya Foxglove”