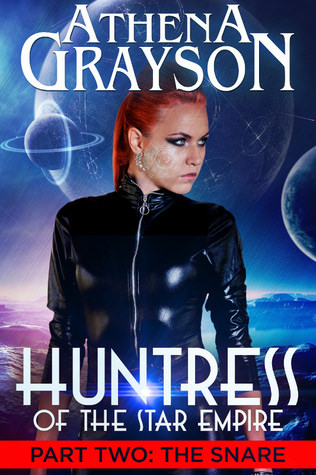 The Snare (Huntress of the Star Empire #2)
by Athena Grayson

Blurb:
She’s bound his hands…now she’s working on his heart.

A simple job turns to a fight for survival when Treska crash-lands on a remote moon, far from the heart of her Union. On the run from space pirates and planetary insurgents, she must rely on Micah to help them both survive when they learn the bounty on her captive’s head is nothing compared to the bounty on her own.

But the moon’s peculiar atmosphere wreaks havoc on Micah’s mental talents, mixing memories of his lost lover with his current captor. Blurring the lines between his mission and his affection might make it impossible for Micah to protect his enemy from his allies.

My Review:
I am totally hooked on this series. After finishing book 1 I kept thinking about the book and after reading another book afterwards, I decided to delve back into this series. I think this book was even better than the first book. Just like the first book I had trouble putting this book down and I just wanted to keep reading and learn more about these characters and the world Athena Grayson created. I bought book 3 as soon as I finished this one as I know it won’t be long before I start book 3.

The focus is a bit more on just Micah and Treska with less other point of views. And while I really liked the other point of views, it felt like in this book it worked to focus more on these two. I feel like we got to know both Micah and Treska better in this book. Although I hope we get to see more of Micah’s psy powers in later books. This book feels really important in discovering more about Treska, I have this theory about her pats and I so badly want to know if I am correct!

They run into some trouble at the end of book 1 and book 2 brings them stranded on a planet, looking for a replacement part. For the most part of this book they are on this planet and it had a bit of a different feel than the first book because of that. I really liked learning more about this planet and it’s inhabitants and because of what happened Treska gets to open her mind a bit more.

Cracks start to show in Treska’s tough exterior and I liked seeing the subtle change in her and I think she slowly begins to doubt what she holds as truth, but at the same time it’s a very slow and believable change. She still holds fast to her beliefs even with the doubt creeping in. We also see another side of Micah, how he used to be a bit of scholar and the connections he made here and even some parts of his past. There are also some new side characters we meet in this book and I especially liked a Mauw character they meet later on. There are some fun interactions involving him.

I know I already mentioned this in my review of book 1, but I love the world building in this series. This author really builds this world so well and makes it all come alive. I liked how we got to explore a moon in this book and see more of the people here. We also meet some new alien races and I liked seeing their habits and how they are different from humans.

To summarize: I am totally hooked now on this series! Book 1 was awesome and book 2 is even better. This book has a slightly different focus than book 1, but it fits the book. Micah and Treska are stranded on a moon and there are less other point of views so the focus is mostly on them. I liked learning more about these characters. And I have this theory about Treska’s past and I so badly want to know if I am correct. I already bought book 3 so I can dive into that one soon. There are some cracks starting to show in Treska’s tough exterior, but the change is slow, realistic and believable. There are some interesting new side characters we met and just like in book 1 I am completely impressed with the world building. I would recommend this to anyone who loves a good (adult) science-fiction book!

Get book 1 The Chase for free if you join the author’s newsletter here!

What’s the last book you read where the character(s) got stranded somewhere?

8 responses to “Review: The Snare by Athena Grayson”