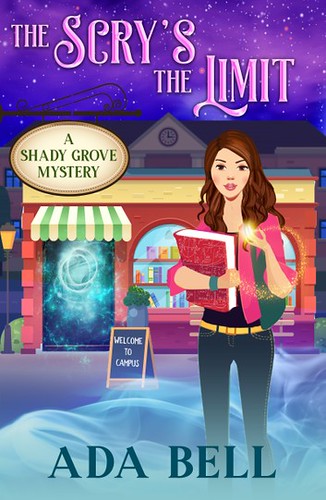 Blurb:
Just when Aly thinks she understands her psychic powers, a new mystery puts them to the test.

Life in Shady Grove is looking up. Aly’s excited to start classes at Maloney College, she loves her job, and her unrequited crush might be starting to turn into an actual flirtation. If only she could figure out how her sister-in-law died and help her brother move on, everything would be awesome. Then, Aly’s academic advisor and favorite professor turns up dead.

Professor Zimm was a beloved teacher. Who would want to kill her? There’s the colleague who could make tenure in her absence; the athlete who resents having to retake the class; the husband who’s never around; the rich girl who’s determined to get an A at all costs. With no shortage of suspects, if Aly can’t narrow it down, the campus killer may never be brought to justice.

I really enjoyed the first book in this series and was happy when I got approved for a copy of book 2 and started it as soon as I could. The Scry’s The Limit follows Aly as she stumbles upon yet another murder, this time one of her professors has been killed. She’s also trying to figure out who killed her brother’s wife. Her academic year is starting and she is working at an antique store as well, so she has her hands full.

This was another great read. I liked following Aly as she got involved into another mystery. I thought it was interesting the murder victim was someone we met in book 1 already. I was a solid mystery. There weren’t as many suspects, but it was still tough to figure out who had done it. As the story progressed Aly eliminates some suspects and had to smile at a scene later in the book with this big misunderstanding that made sense as well looking backwards. I was thinking in the right direction when it came to the murderer as far as the motive, but was surprised at the actual reveal. It was a nice twist and made sense.

Besides the mystery there are enough other things going on. I like how Aly makes some progress figuring out why her brother’s wife was killed. And that twist at the end totally took me by surprise and I can’t wait to see how that progresses. There is more magical/ paranormal stuff as well in this book with some new interesting tidbits. There are also some scenes around campus as she’s following classes there and she meets a few new possible friends as well.

There is a hint of romance, but to be honest I rather wish it was either a bigger or less part of the book. It’s a bit awkward with how Aly has this massive crush on Sam, but there aren’t many scenes with them together and I don’t feel there is as much to their connection than attraction. I just would like to see more of them together as it feels they feel close without spending as much time together. I just didn’t really feel their connection yet.

I like the continuity this series has so far. While it can be read as standalone, I think it works better as a series. We see Aly develop and her powers. It was nice seeing a bit more about her powers in this book and I liked how important they are for solving the mystery too. And then there is her friendship with some of the town folk as well. I was pleasantly surprised to see some of the side characters that were part of the mystery in book 1 pop up again. Even the murder victim and one of the suspects made an appearance in book 1 already, I liked this.

To summarize: This was a great sequel. I like reading about Aly and how she uses her powers to solve mysteries. This mystery had some great twists and turns and even with not as many suspects I wasn’t quite sure who had done it. I was thinking in the right direction motive wise, but was still surprised by the reveal. Besides the main mystery Aly is also trying to figure out who killed her sister-in-law, it was great to see her make some progress with that. Besides that there is plenty of other things going on like her academic year starting and her work at Olive’s shop. I liked seeing Aly spend time with the side characters, some recurring ones and other new. I like the sense of continuity this series has so far. This was a great read and I am really looking forward to the next book!

2 responses to “Review: The Scry’s The Limit by Ada Bell”