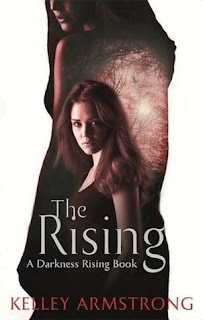 Blurb from Goodreads: Things are getting desperate for Maya and her friends. Hunted by the powerful St. Clouds and now a rival Cabal as well, they’re quickly running out of places to hide. And with the whole world thinking they died in a helicopter crash, it’s not like they can just go to the authorities for help.

All they have is the name and number of someone who might be able to give them a few answers. Answers to why they’re so valuable, and why their supernatural powers are getting more and more out of control.

But Maya is unprepared for the truths that await her. And now, like it or not, she’ll have to face down some demons from her past if she ever hopes to move on with her life. Because Maya can’t keep running forever.

My review:
I loved this book! The beginning was a bit slow, but that quikcly changed and when I finished the book I just there thinking I want more. She can’t end the book here, I want to read more.

Since I picked up book 1 in this series I just loved it. The Rising starts off a bit slow paced, even though I re-read book The Calling before starting The Rising I still had some difficulties getting into the story. Also I missed the setting from the 2 previous books, there is no forest around at first, but then as soon as the pace picks up I couldn’t put it down. I just had to know what was going to happen and how they would meet Cloe and if this book would have a happy ending and if so how would the achieve it. And I wanted to learn more about their powers.

The Rising has some great action packed scenes. The story is just as great and the pervious books and I liked all the twists and turns I was surprised a few times where the story took us, but I enjoyed every second of it. And then the ending is just perfect, although I wished some things happened earlier in the book. I think the ending was just perfect, everything was wrapped up nicely and I liked what happened. Nevertheless I still felt like it wasn’t enough. I wanted to know what would happen later, how their lives would be now. I just wanted more of the story and the characters and everything. And I am so sad this series is over now.

The characters are another thing I love about this series. The characters are all so real and believeable. Maya is one of the best main characters I have read about, I love how she can be a bit of a geek and how she makes mistakes and then later actually realized she made a mistake and how strong she is, while also needing help. She is such an amazing character and really if Kelley Armstrong would write a series about the rest of her life I would gladly read it. I love her connection with nature and the animals and how much she cares about her friends. And then Daniel, he is such an awesome friend, he is always there for Maya and I can’t imagine she could have a better friend than him. The other characters are great too, I also really got to like Corey in this book and how he tries to deals with powers and brings humour to the group. There is less about Rafe and Annie than I expected to be in this book. And I still can’t get a good idea of who Haley is, but she really shows some strenght a few times in this book and her character really grew on me. She was also really honest and I liked that about her, she easily admits she hates the running while no one else dares to say it.

To conclude: The Rising is an awesome ending to an awesome series. I loved it so much and I am so sad this series is over, because I just want to read more about Maya and her friends. After a slow start the story really took of and I just wanted to keep reading. I really love the characters in this series and I think Maya is one of the best main characters I have read about. She is just awesome!

You can buy The Rising here:
– Amazon
– B&N
– Kobo
– The Bookdepository

2 responses to “Review: The Rising (Darkness Rising #3) by Kelley Armstrong”