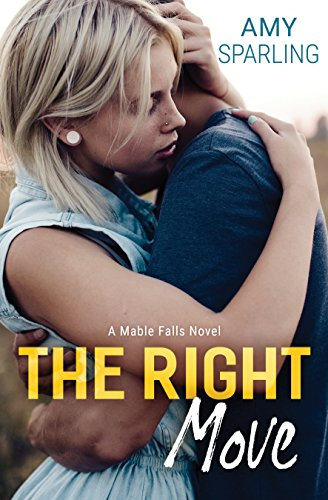 Blurb:
A lost woman. A man hiding from his past. Finding each other will save them both.

Four years ago, Olivia Westland dropped out of college to take care of her grandmother in the tiny town of Mable Falls. Now that Grandma has passed, she finds herself friendless, jobless, and with nowhere to go. An unlikely friend at her favorite bakery sets her up with a place to sleep for the night. Only it’s not just a bedroom in some random person’s house—it’s a room at Mason Sharp’s mansion. The guy is just as gorgeous as he is unavailable.

Mason is a broody loner who prefers a small-town life away from the gold-digging women of his past, but when his cousin asks him to take in a friend who has nowhere to go, he can’t tell her no. It was just a favor and he never thought he’d find himself falling for Olivia, with her sweet smile and kind eyes. He promises to let her stay as long as she needs to get back on her feet, but the promise he makes himself—to stay away from her—will be harder to keep.

I read my first book by this author last year and was excited to read more of her books. I liked the sound of this one and jumped on the chance to read it. Sadly this one fell a bit flat for me. I liked the premise and the writing was good, but I had a hard time connecting with the characters and I didn’t feel the romance at all. The pacing was a bit off at times and the ending leaves a lot of smaller things unresolved.

The Right Move is set at a small town named Mable Falls. I always like small town settings and liked what we saw of the town, I just would’ve liked a bit more information so it really came alive. I liked reading about the bakery in town and the descriptions of the bakings make it all sound delicious.

The set-up of this book was quite interesting. Olivia’s grandma dies and suddenly she is homeless when her uncle inherits the place and she is now jobless and homeless. I liked how this was a bit different than most new adult books I read. Instead of featuring people who are going to college, it follows Olivia who is jobless and homeless and figuring out what to do next and Mason who actually has everything together at age 24 who owns a nice house and a shop. I liked reading about different type of characters who didn’t go to college, but took a different road as it seems there aren’t as many books about those.

The writing was good, but I felt like the plot has a few holes here and there and the ending felt a bit off to me and left a few things open ended. One of the things that bothered me is how when Olivia’s grandma dies her uncle inherits the house, but we never hear why he inherits the house and not Olivia. Or if the uncle was even telling the truth, yes I was actually wondering that, but from Olivia’s point of view we get no insight in that either way. When the book ended I still didn’t have answer to that and a few other small things that got brought up weren’t full resolved, like if Olivia decided to go back to school or not. Or the thing with her car if she ever noticed that. Or what happened to the other house Mason had and if he ever went back to that.

While Olivia was a nice enough character, but I never fully warmed up to her. She seems very innocent and a tad naive. I liked how resolutely she handled some situations, but in other situations she didn’t seem to know how to handle herself. The whole housing situation made me a bit uncomfortable with how Mason treated her and I thought it was surprising she stayed there as long as she did, but then again she did really have nowhere else to go. I also though she was a tad harsh toward her dad, although he sure wasn’t nice to her either.

And while I never fully warmed up to Olivia, I did like her better than Mason. Mason’s hiding from the past that was mentioned in the blurb is much less interesting as it sounds. He has been hurt in the past and he is now guarding his heart with everything he has. He is a loner and actively enforces that. He comes across as a bit too cynical and negative. He has this bad imagine of women and generalizes that to all women. And when he opens up to Olivia is in one of the last few chapters and quite suddenly. I just had trouble liking him and didn’t see what Olivia saw in him. I did like the sound of his house and how well he had his life together and he liked his job.

Sadly I didn’t really feel the romance in this book. While I would categorize it as a romance book, there’s a lot of other things going on as well and the romance is more of a side plot line for a while. And then when Olivia moves in with Mason I had expected things to progress a bit, but they don’t really. They connect a bit and then both pull back. And then suddenly it does progress very suddenly in the most unromantic situation. And with the situation they were in I would’ve thought they had something else on their minds than romance.

It just felt a bit off to me how things progressed. And then when things suddenly heat up, they seem very close without any build-up. They hardly know each other, but then suddenly seem quite comfortable with each other. I just would’ve liked a bit more build up and them getting to know each other scenes as I didn’t feel their connection. I just would’ve liked to feel that there was more between them than attraction on both sides.

There are a few interesting side characters and it makes me wonder who of them will be the main characters of the next book in this series. I had hoped to get to know the side characters a bit more, but they stay pretty flat, except for Mason’s cousin and Olivia’s friend Alexa, who plays a pretty big role in the story.

To summarize: The Right Move was an unique New Adult contemporary romance read. I liked the small town setting and how it followed two characters who didn’t go to college, but took another path in life. I never fully warmed up to the characters, but I did like Olivia more than Mason, who stayed pretty distant and closed off until the end. He was a bit too negative for me and while I understood that he had gotten hurt in the past, it felt like his reaction was a bit too extreme. I just didn’t fully felt his hurt and understood his character. The romance fell a bit flat for me and I would’ve liked a bit more of them getting to know each other. While this book had a lot of potential, it just felt a bit flat for me.

What was the last New Adult book you read?

10 responses to “Review: The Right Move by Amy Sparling”