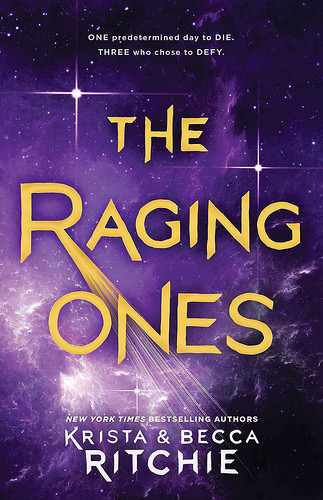 Blurb:
In a freezing world, where everyone knows the day they will die, three teens break all odds.

Franny Bluecastle, a tough city teen, dreams of dying in opulence, to see wealth she’s never known. Like the entire world, she believes it’s impossible to dodge a deathday.

Until the day she does.

Court Icecastle knows wealth. He also knows pain. Spending five years in Vorkter Prison, a fortress of ice and suffering, he dreams of life beyond the people that haunt him and the world that imprisoned him.

Mykal Kickfall fights for those he loves. The rugged Hinterlander shares a frustrating yet unbreakable connection with Court—which only grows more lawless and chaotic as their senses and emotions connect with Franny.

With the threat of people learning they’ve dodged their deathdays, they must flee their planet to survive. But to do so, all three will have to hide their shared bond as they vie for a highly sought after spot in the newest mission to space. Against thousands of people far smarter, who’ll live longer, and never fear death the way that they do.

When I first heard about this book I didn’t think it would be a book for me as the whole deathday thing just didn’t appeal to me, what convinced me to give this one a try were the characters and the empathic connections they have, which I did like the sound of. In the end this ended up being my opinion of the book as a whole as well, parts I really liked and enjoyed and other parts I didn’t care for.

The book start with Franny’s deathday, she knows she is going to die, but then instead of dying she ends up being linked with two boys. I liked the whole empathic connection thing and only wished it had been explored a bit more, there are some scenes where you really feel how it is to live with this empathic connection and get the struggles and also the joys of it and the authors did a good job of strewing this part throughout the whole book, but I guess I just wanted even more as I found this part interesting.

The book as a whole could be pretty slow at times and while there were parts I really enjoyed, there were also parts that failed to hold my attention. Some scenes I didn’t see the relevance of and half of the time I wasn’t sure where the story was going, which can be a good thing, but I felt that a bit more build-up and foreshadowing could’ve made the plot lines a lot better. There is a big reveal that comes seemingly out of nowhere toward the end of the book and no one seems as surprised, it just lacked impact. And I would’ve liked a few more hints so that it didn’t feel like this reveal came out of nowhere. There were also part of the story that didn’t make much sense to me.

I also felt that there were plot lines that got started and then shelved for a long time before being picked up again and I would’ve liked a bit more consistency and continuity with it, with those storylines progressing through the whole book. And while the book could feel pretty slow to progress at times, at other times it just felt like there was too much going on and maybe that actually added to the slow pace as each aspect progresses more slowly. I think that’s also why it lacked a bit of focus for me, there are so many aspects of this story that it felt at times, that none of the aspects got the full attention. Which is not a problem, but it just felt like there was too much in this book and that some parts didn’t get as explored as possible because of that.

And I am not even sure what to think of the reveals at the end. The end almost felt rushed compared to the previous pace, with multiple reveals and changes cramped in there. I actually would’ve liked if the book ended a bit earlier as it would be interesting open ending then. But by continuing the story and putting those extra reveals in there, without the space to explore them, it was just weird. And it was a bit confusing and at that point I didn’t even care what would happen next. Although there sure were some unexpected twists there.

A part I did like were the characters. This story is told from multiple point of views from Franny, Court and Mykal. I liked their relationships with each other and seeing how they interacted. Mykal was probably my favorite of the three, while he might not been as smart as the other two, there was something in his personality that I really liked. His determination to continue and do what he can. And I really felt for him with what he did early in the book, but it also was so in characters. Court is pretty cold for most of the book and it made it hard to fully warm up to him, but it becomes clear he is hiding a whole lot of hurt and there are scenes where there are cracks in his cold facade which were great. I just wish he wasn’t so hard on himself and the other two. Franny was a nice character too, I liked how we see her struggle to remain true to herself even while she knows she has to change and she has a lot of fear as well, which felt realistic. I did think there could’ve been a bit more character depth at times and I would’ve liked some topics to get explored a bit more, but maybe that will happen in the next books.

From the start Mykal and Court have this clear chemistry and I was routing for them to become a couple, but while there is a bit of romance in this book it is pretty minimal. There is very little attention to the romance, but then the scenes that were there romantically were really good. I just would’ve liked a bit more build-up and seeing things progress/ change/ develop throughout the story instead of a scene here and there before it becomes more. I also had expect the romance to go a different direction than it did, but it might still go that way later, but I don’t think so, but I actually liked the direction it went into.

The world building is another part were I have mixed thoughts about. I didn’t like the deathday thing, it just didn’t make sense to me and I just don’t really care for the whole idea. The laws of physicals and technology just didn’t seem to work as it should at times, just because people can’t die if it’s not their deathday, which is pretty ridiculous if you think about it. But it’s like the whole deathday thing is a law of physic in and of itself in this world, and I guess it just didn’t work for me, it was just weird. But once you accept that basic premise, the rest of the world did make sense. With how people got categorized by when they died and some options were or weren’t available depending on that category. And I did like that part, how that main concept was thought through and the world build in a way that made sense. The question why the three main characters dodged their deathday is one that doesn’t really gets explored, although it is clear they have looked into it a bit and didn’t found any answers. And at the end there is a hint that we will find out what caused it.

Sometimes it was hard to get a good feel of this planet. It is clear they are on a different planet than Earth and have some technology and they have the Stardust program so they have some sort of space faring technology. But besides that it was hard to get a grip on the type of technology was possible. It was interesting how there were different regions and cities and the authors did try to make the world come alive a bit that way. There also was something we learned later on and I would’ve thought that was something their society would’ve shown more traces of as it was an important part of their history.

To summarize: I have some mixed feelings about The Raging Ones. There were parts that were really good and other parts I didn’t care for. It could be a bit slow at times and failed to keep my attention. There were also parts and scenes I really enjoyed. I liked the whole empathic bond the characters had and the characters itself were well done and interesting. I also liked the romance, although I would’ve liked a bit more continues build throughout the book. There are some interesting reveals, although they lack impact at times, and very little build up or foreshadowing. I felt at times that there were too many themes or aspects this book tried to address and not everything got enough attention. I didn’t like the whole deathday thing, but the world made sense given that basic premise. It was a bit confusing what their technology level was and one of the reveals I would’ve thought we should’ve seen more evidence of in their world. All in all I did mostly enjoy this book, but I also struggled with parts and never fully enjoyed it because of that.

Have you read a book where the characters knew when they would die?

8 responses to “Review: The Raging Ones by Krista Ritchie and Becca Ritchie”