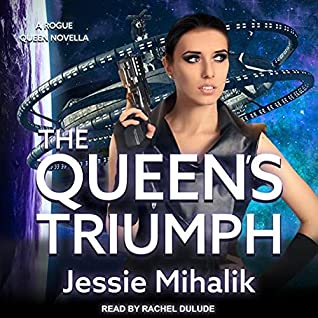 Blurb:
Queen Samara Rani knows she’s likely walking into a trap, but agreeing to meet with Commander Adams is the fastest way to get within striking distance of the Quint Confederacy’s biggest traitor and her sworn enemy. Adams attacked her home and destroyed her ship, and if he’s not stopped, he will ruin the tentative peace between the Kos Empire and the Quint Confederacy—and Samara’s chance at future with Emperor Valentin Kos.

Samara is determined to serve up some well-deserved payback, but she is no longer a lone assassin, and despite her protests, her friends and allies refuse to let her undertake such a perilous mission without them. Even Valentin, usually the voice of reason, refuses to stay behind. Samara is loath to put her friends in danger, and taking a team carries its own risks, so she makes plans to keep them safe, no matter what the cost.

When Adams threatens that safety, and everything she holds dear, Samara vows to show him exactly how she earned her deadly reputation—and why one should never cross the Rogue Queen.

I received a free audio copy of this book from Tantor Audio and voluntarily reviewed it.

I was really looking forward to reading this third and last book in the series and seeing how everything got wrapped up. I am happy to say this was a very satisfying conclusion to the series. All open plot lines got resolved, the romance progressed, we see more of the characters and it had a great ending.

In The Queen’s Triumph main character Queen Samara Rani agreed to meet with Commander Adams on a space station. Commander Adams attacked and harmed her and those around her multiple times and this book is all about how she will deal with Adams. I liked the tension of this book and the wondering what Adams had planned and how Samara would stop him. This all build till the shown down later in the book and I liked seeing how it all got resolved.

Besides the big plot point about commander Adams there is also Samara and Valentine’s relationship that’s deepening even more. I really loved seeing them take that final step in their relationship and growing even closer. I really liked them as a couple. They have a few disagreements, but they always talk them through and I really liked that. I also like how considerate and understanding Valentine is, he really is a great match for Samara. They made for such a great couple and I loved seeing them work together to deal with the threat Adams poses. There are plenty of sweet and touching scenes as well as some steamy ones. And I really felt like I got a good feel for them together.

Besides that there is plenty more of the familiar characters we got to meet in the first two books and even a romance between two side characters that sort of plays out in the background that we get some hints about. I almost wish we would get a book about them as I would like to see more about them. Stella, Ari, Imogen, Lucas all play a big role here, as well as the cook Eddie, whom I quite liked in this book. And there’s a new character as well who was intriguing.

Another thing I liked about this book is that we still get a bit more world building and see more of the galaxy. A big part of this book takes place on a space station and I liked the setting and getting a feel for the station and how things worked there. It was really interesting.

As with the previous books I really enjoyed the narration by Rachel Dulude. She did an awesome job with this series and I like how everyone had a distinct voice that fit them and their personality. I had already bought the ebook of this book first as I wasn’t sure if there would be an audio and I am so happy there turned out to be an audio eventually. I am glad I got to finish this series with audio as this series is so good in audio.

To summarize: This was a satisfying and awesome ending to this series. I like how the main plot liens get wrapped up and also how there’s plenty of romance too. There is some tension as Samara has to deal with the threat Adams poses and we don’t know what he has planned. It’s exciting seeing it all play out. I also like how there’s plenty of romance in this one. Samara and Valentine grow even closer and they make for such a great couple. I like how they’re there for one another and understand eahc other and talk things through. There is plenty of sweet, touching and steamy scenes between them. I also liked seeing more of familiar characters as well as some new ones. And I liked seeing more of the space station where a big part of the book takes place. The narrator did an awesome job with this one and I really liked how she did all the voices for the characters. All in all this was an awesome scifi romance series and I would definitely recommend it to fans of the genre.

3 responses to “Review: The Queen’s Triumph by Jessie Mihalik”