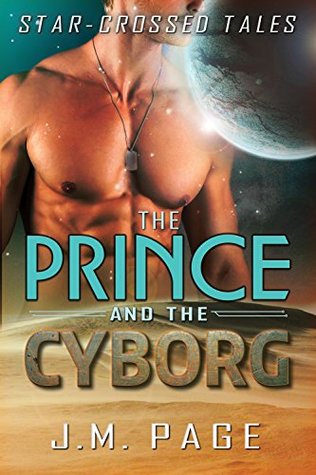 The Prince and the Cyborg: A Space Age Fairy Tale (Star-Crossed Tales)
by J. M. Page

Blurb:
THE CYBORG
Celine Velmann’s never seen the sky. Her entire life, she’s lived in the Wastelands, where brutal dust storms that fill the sky are a way of life. She’s always dreamed of the stars that she’s only seen in pictures, but even her infallible robotic arm can’t craft the technology to get into orbit, so she’s stuck on the ground.

When she sees a ship crash, Celine’s drawn toward it like a magnet — maybe this is the chance she’s always hoped for, the chance to escape her dusty life for something more. But when the hatch opens to reveal a half-dead but handsome human, she thinks twice.

After all, her father’s warned her that humans are dangerous. That, if they could, they’d kill every last one of Celine’s kind.

THE PRINCE
Ben’s never been good at anything but flying, but in the air, he’s the best there ever was. When the King — Ben’s father — orders all flights in the city grounded, he’s left stir-crazy and starved for action. Crazy enough to steal a ship and volunteer for a desperate, doomed, last-resort mission straight into the gaping maw of the Wasteland.

A day later he wakes up in a hospital bed, broken and bruised. The only thing he can remember about the Wasteland is a beautiful woman with vivid eyes, a soothing voice… and a mechanical arm.

Everyone knows cyborgs are just a legend, something parents tell their kids about to keep them in line. But when a beautiful, familiar woman shows up in the City, Ben finds her very intriguing. Things go off the rails quickly when Ben’s city is exposed to the punishing dust and Celine realizes her family is in the crosshairs of a vengeful alien.

Can Ben and Celine overcome age-old prejudice to discover happiness together and save the planet, or will fear and suspicion get the best of them and doom them all?

The Prince and the Cyborg is 48,000 words of thrilling, page-turning, romance with strong themes of self-acceptance and adventure. This book contains NO harsh language, explicit violence, or graphic romance scenes. It is an adult romance, but is suitable for older YAs as well. I hope you enjoy!

My Review:
A sci-fi retelling of the Little Mermaid that’s how I saw the author describe this book in a group I am part of and it caught my attention. The Little Mermaid was always one of my favorite Disney movies and retelling it as a sci-fi story sounded great. Combine that with my current mood for sci-fi romances and it seemed a good idea to buy this one. The prince and the Cyborg is a fun fairytale retelling and while I normally stay away from fairytale retellings I am glad I picked this up and gave it a try.

The story is told from Celine and Ben their point of views. Celine is a dreamer, she dreams of seeing the sky, but she’s stuck in underground tunnels with the rest of the cyborgs. She fights for what she wants even when it’s dangerous. Then there is Ben who is a prince who loves flying, but is stuck on the ground due to a government issues grounding. At the start I wasn’t sure if I was going to like this one. The writing felt a bit chunky? It’s hard to explain, but I had some trouble getting into the story, but as the story progressed it only got better and better. And by the end I was sad to see the book end and am looking forward to read more by this author.

One of the small issues I had with The Prince and the Cyrbog was that at times you really noticed the hints to the tale it was based on, a bit too much for my taste. This is the reason why I normally don’t read fairytrale retelling as it seems like it’s just retelling an already existing story. And at times that’s pretty much what this novel felt like. There are scenes that feel so familiar, even sentences that felt almost exactly the same as in the movie and the character all could be lead back to who they are in The Little Mermaid. And twist I could predict almost exactly because they were so in tune with what happened in The Little Mermaid.

So that’s the part I struggled with a bit, but as the story progressed I also got a better eye for the differences. Celine isn’t like Ariel, she can actually talk and tell the prince of her hopes and dreams. Rufus might be like Flounders, but he can travel with Celine to the walled city. And the sci-fi elements gave everything an original touch as well. And then towards the end it felt the story deviated more from the original story as well. So it took me some time to look over the similarities to see the differences, but when i did I enjoyed it a lot more.

So I did end up enjoying this book for the most part even though I struggled with the retelling parts and writing at first. The story got smoother and more original as it progressed and it did keep my attention. I liked the world the author build with the cyborgs who live out in the tunnels and the rest of the citizens live in a big walled city and can travel to space.

I would’ve liked to get more of a feel for the technology and everyday life, but I was able to create a good mental image of the planet and the city, so that was nice. It did feel like a few scenes could’ve been expanded on a bit and things that went a bit too easy or a tad rushed towards the end. And I would’ve liked to get to know the villain a bit better. At first she didn’t seem as nasty, but at the end it just left me wondering why she acted that way and how she had planned things. There also is a fun epilogue that shows what happens afterwards.

I did like the main characters and the dual point of view worked great to get to know both Celine and Ben. They both have enough depth to make them interesting and I also felt like these two really connected with each other, not only because she saved him but they also got to know each other and had things in common. Also while that cover with the half naked man might suggest otherwise, this is a sweet romance story. There’s some kissing, but that’s it. I enjoyed reading about Celine and Ben and follow their story and see them fall in love.

To summarize: I enjoyed reading this book, although I struggled with the start a bit. The writing felt a bit off at first and I had some trouble seeing past the similarities with The Little Mermaid, but as the story progressed that both got better. And at the end I was really enjoying this book and am curious to see what this author writes next! The sci-fi setting was interesting and I liked the main characters. Both have enough depth to make them interesting and it was fun to see them fall for each other. Add in some fun side characters and a interesting desert planet setting that was easy to visualize and this was a fun read.

18 responses to “Review: The Prince and the Cyborg by J.M. Page”