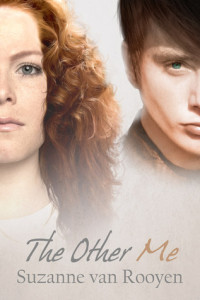 The Other Me
by Suzanne van Rooyen

As Treasa spends time with Gabriel, she realizes she might not love him as much as she wants to be him, and that the reason she feels uncomfortable in her skin might have less to do with extra-terrestrial origins and more to do with being born in the wrong body.

But Gabriel is not the perfect boy Treasa imagines. He harbors dark secrets and self-destructive tendencies. Still, Treasa might be able to accept Gabriel’s baggage if he can accept who she longs to be.

I really liked the sound of the blurb, but I never expected to like it as much as I did. I really like this authors writing style and as soon as I started this book I just couldn’t stop reading it. The story totally captured my attention. The story is fresh and original and the author captures those teenager feelings of feeling left out so well. I could totally relate to Treasa, even though she has different problems, those feelings of being alone and misunderstood are feelings I struggled with when I was a teenager as well. I loved how well Suzanne captured those feelings and wrote this story without being afraid to handle the difficult topics.

I really liked the characters and how real they felt, for some reason I love it in contemporary romance books when the character feel real. They acted realistic and I enjoyed learning more asbout these two troubled teenagers. The two point of view thing really worked for this story and gives the reader both Treasa and Gabriel their point of view. Both have their issues, but I really liked both of them and understood why they acted the way they did. While dealing with some serious topics, it managed to have enough light and funny moments as well.

I really liked the romance in this book. The ending was a bit too open for my taste, while on the one hand it was a great ending, I also wanted more. I grew to like these characters and I just wanted to know what would happen next.

There are some south african words thrown in, but as the language looks a lot like Dutch (my mother language) I didn’t have much difficulty understanding the words and I liked how this book was set in a country i’ve never read about, although there wasn’t much focus on the setting I still liked it.

To conclude: I really enjoyed The Other Me and once I started it I didn’t want to put it down. I really like Suzanne her writing style and I loved how well she wrote about difficult issues and managed to write those feelings of feeling alone and different so well. The ending was great, although a bit too open for my taste. The romance was done well. The Other Me is one of the most fresh and original Young Adult contemporary romances I read in a while!

You can find The Other Me on Goodreads