Merry Christmas to everyone’s who celebrates it! For today’s post I decided to go with a Christmas themed book for review. This cozy mystery had a large focus on Christmas festivities and it was a fun way to learn more about a British Christmas. I hope you all have a wonderful day! 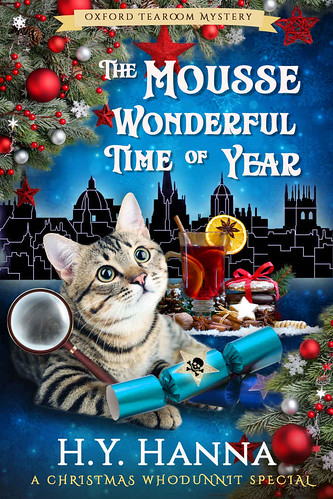 Blurb:
Tearoom sleuth Gemma Rose is looking forward to a holiday filled with delicious Yuletide treats, time with friends and family, and maybe even a “white Christmas” in Oxford… But when she’s snowed in at a country manor, she finds herself stumbling on a puzzling murder—complete with a body in the library, a house full of suspects and a trail of mysterious footprints!

Luckily, the nosy Old Biddies are on hand to help… not to mention her cheeky tabby cat Muesli. Add in some carol singing, Christmas baking and flannel underwear, and Gemma’s stocking is bursting at the seams. Can she solve this festive whodunnit in time to enjoy the most wonderful time of year?

The Mousse Wonderful Time of Year is the 10th book in the Oxford Tearoom Mysteries series. It’s a fun Christmas cozy mystery. The book has a slightly different feel than most books in this series, but it also has all the things I’ve grown to expect from this series from the mystery, to the funny scenes, The Old Biddies, Gemma’s mom, Muesli and more. And the main character Gemma who ofcourse gets dragged into another mystery.

The other big part of the book was ofcourse the mystery. I thought the book started off with a bit of a forced set-up, it’s obvious all the main characters have to be in the same location at a certain point and it felt a tad forced at times. With coincidences and certain events conspiring to get everyone at the same place. And Devlin goes out of town for Christmas so he won’t be there (and can’t help Gemma with the mystery). A sudden snowstorm and doing the dishes makes sure there is no way to leave and then while they’re snowed in at the same house while a murder takes place.

Once the murder has started things improved a lot. I liked the locked room type of mystery, with it begin clear the murderer probably was on of the characters who had been snowed in. I also liked that they don’t stay stranded at the house for the whole mystery. The mystery felt a bit shorter or like it developed quicker than most of the books in the series, but maybe that’s just me or because the Christmas festivities also took up a big part of the story. There were some interesting clues, red herrings and plenty of suspects. It was fun to see how Gemma pieced everything together. I managed to guess the murderer correctly, but guessed the motive wrong, so I liked that revelation at the end.

This series has a fun cast of characters. I like reading about Gemma, how she gets involved in another murder mystery and how she also wants to think the best of characters. She does jump to conclusions at times, but I also like how she can be open minded and looks at the mystery from all sides. There are some fun scenes with her mother, Muesli and the Old Biddies as well. Although Muesli again got used as a plot device a few times to get Gemma to go to a certain place. I had fun reading the Christmas day scenes, while it might be a bit too much, it did feel realistic and funny with the way how the holidays not always go smoothly and everything that can go wrong goes wrong.

Due to certain events there was very little of Devlin and Gemma together in this book. There also isn’t as much about the tearoom as usual, but with the Christmas focus and the tearoom being closed that made sense and I think it worked here. I didn’t really care about the new characters the mystery circled around, but that’s probably because most are suspects and Gemma doesn’t really get close to them. It was interesting to see all the family dynamics and how they all had their own motives and almost everyone had something to hide.

To summarize: This was a fun Christmas themed cozy mystery read. I like how both the mystery and Christmas festivities take up a large part of the story. I thought it was fun and interesting to read about a traditional British Christmas and what traditions and foods play a role. The mystery also got plenty of attention, although it did feel like things developed a bit quicker than normally. I managed to guess the murderer right, but not the motive. I liked following Gemma along as she and the Old Biddies try to figure out what happened. There are some funny scenes as well and Muesli also makes some appearances. If you’re looking for a fun Christmas themed cozy mystery I would definitely recommend this one.

6 responses to “Review: The Mousse Wonderful Time of Year by H.Y. Hanna”