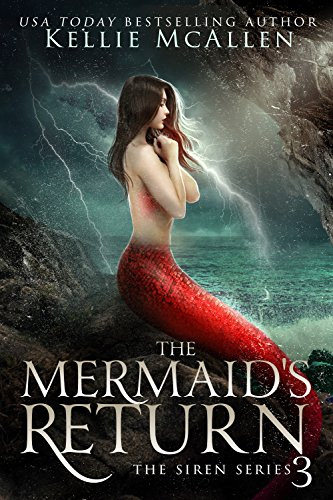 The Mermaid’s Return (The Siren #3)
by Kellie McAllen

Blurb:
A mermaid on a mission, four sexy, human mates, and a destiny divided between two worlds.

Thrust into an intriguing world of merfolk she never knew existed, Coral is awed and inspired by their dual existence. And after unexpectedly finding the one person who knows the truth about her past, Coral realizes she’s lived most of her life under a spell of lies.

Determined to free her people from the deception that’s held them captive, Coral returns to her underwater home. But she soon realizes that defeating a powerful stronghold is more than one mermaid can handle.

Lucky to have escaped with her life, Coral returns to the land and the men she loves. But when duty calls her once again, Coral must decide once and for all between her heart and her destiny.

If you like the myth, adventure, and romance of fantasy stories by authors like Jaymin Eve, Bella Forrest, and Amy Bartol, you’ll love The Mermaid’s Return.

This is a reverse harem paranormal romance series appropriate for ages 18+.

I was so curious to see what would happen next after the way book 2 ended. This book gave a lot of answers, a nice twist and it wrapped this series up with a great conclusion. I also liked how we got to see a bit more of the mermaid world in this book and how the book nicely balanced things between the water and land worlds. And there is so much that happens in this book to the mermaid and her four guys. It sure was an engaging read.

At the end of book 2 there is a reveal where Coral learns some new things and in this book that gets explored a bit further. We finally get some answers about some of the mermaid stuff and it was interesting to see how Coral handled it all. The pace is on the fast side, but it only feels rushed in a few places. For the most part the pace really works here. I really enjoyed this book.

I liked how we see Coral deal with wanting to be part of both the sea and land, her duties and love. She has some difficult decisions to make. But I am glad how things ended up at the end. There was a plot point that I was really wondering how it would get resolved as there didn’t seem a way it would end in a good way for her. But there was an interesting twist which worked great and made sense. I liked how there are small hints leading up to that twist since book 1.

In book 2 there were quite some challenges thrown in their way with how each of the men was chasing their own dreams and had their own struggles. And I was curious to see how that would get resolved here. I did like the direction things took on the front in this book, although it did feel a bit sudden how things changed, but it did make sense given what happened earlier in the book and how that changed their perspective.

I liked how Coral has some moments with each of the guys and also how their dynamics as a group progress. I wouldn’t have minded a bit more connectivity between the guys, but there were some parts where it was clear they grew fond of each other. But the focus was mostly on how each of them cared for Coral. This book also has some chapters from each of the guys their point of views, which makes sense given what happened and I think it worked as it allowed us to see some events we wouldn’t be able to experience else. and most of the chapters are still from Coral’s point of view.

This book nicely wrapped up the series, but only after they had to overcome a bunch more challenges. It was fun to see some of the side characters again and see how their plot lines progressed and got resolved as well. And this book also provided us with some more information about the mermaid world, which I liked. There were a few minor things that didn’t quite make sense regarding the mermaid civilization, but they didn’t diminish my enjoyment of this book.

To summarize: this was a great ending to this series. After an interesting reveal at the end of book 2, this book explores that a bit further and throws a bunch more challenges in the characters way. It was an engaging read that kept my attention. I liked how we learn a bit more about the mermaid world and how there are parts focused on the water and on the land world. There are scenes with each of the guys and also with them all as a group. There are also a few chapters from each of the men their point of view, which worked here. I really liked how everything got resolved at the end. All in all this was a fantastic mermaid series and I had fun reading this one. I’ll definitely plan to read more of this author’s books.

What’s your favorite paranormal creature to read about?

6 responses to “Review: The Mermaid’s Return by Kellie McAllen”