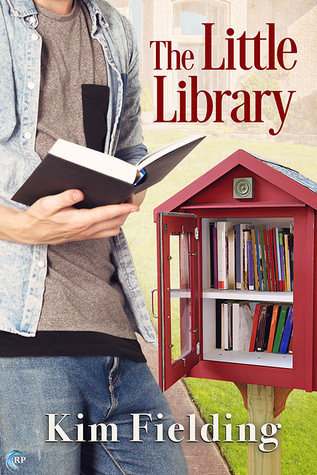 The Little Library
by Kim Fielding

Blurb:
Elliott Thompson was once a historian with a promising academic future, but his involvement in a scandal meant a lost job, public shame, and a ruined love life. He took shelter in his rural California hometown, where he teaches online classes, hoards books, and despairs of his future.

Simon Odisho has lost a job as well—to a bullet that sidelined his career in law enforcement. While his shattered knee recovers, he rethinks his job prospects and searches for the courage to come out to his close-knit but conservative extended family.

In an attempt to manage his overflowing book collection, Elliott builds a miniature neighborhood library in his front yard. The project puts him in touch with his neighbors—for better and worse—and introduces him to handsome, charming Simon. While romance blooms quickly between them, Elliott’s not willing to live in the closet, and his best career prospects might take him far away. His books have plenty to tell him about history, but they give him no clues about a future with Simon.

The Little Library caught my attention when I was scrolling through netgalley and I am glad I decided to request it. It’s an enjoyable romance book with a bit of a bookish theme. I had a fun time reading this book, although I had a few small issues with the book and the way it was written sadly failed to fully pull me into the story. But overall it was a good read and I am glad I gave it a try. It’s more of a 3.5 star rating, but not yet fully a 4 star for me.

The Little Library follows the story of Elliott, who has a lot of books. Then one day he decides to do something about it and clear out some of those books with the help of a little library. Through the library he meets new people and eventually discovers someone is lending his gay books and he wants to find out who. And that’s how the romance eventually starts. The bookish/ little library plot line was a fun addition. It’s something almost every book lover can relate to and I liked how it was a part of the plot, but it wasn’t overdone or too prominent.

This was a gentle paced romance with lots of sweet scenes and a bit of heat. I liked how Elliott and Simon took the time to get to know each other a bit and go on dates before they landed in bed together. I liked these two together and I enjoyed reading about their dates, from their first awkward dinner together to the trips they took. It was fun to see them grow closer and get to know each other. I really liked these two and how they really cared about each other. And I liked how accepting they were of the other and their eccentricities.

There were two obvious points of conflict from the start of the book and while they got mentioned a few times, it’s like both characters wait with addressing it until the end. There’s a bit of drama toward the end I didn’t really care for, but I did like how they resolved it eventually and how they stayed honest with each other. Although I would’ve liked a bit more talking through things. There also was a bit of a plot line about Elliott’s ex that I didn’t really care for, they mentioned him a lot and how this relationship was compared to the previous one. And while that partly felt natural, I also tough it was a bit much at times.

My main issue with the book was how it felt like it stayed a bit distant at times. It’s hard to explain, but I felt like I didn’t get as deep into Elliott’s thoughts and feelings as I would’ve liked. he’s the main character, but at times it almost feels like someone else telling his story than himself. Sometimes I wasn’t sure what he really wanted, or maybe he didn’t know himself. But it was difficult at times to get pulled as much in the story as I would’ve liked. There is one scene later in the book which shows some emotion and feeling, which was great and I felt I understood Elliott was going through and why he was so conflicted. I just would’ve liked a bit more of that. There were also a lot of topics regarding their jobs, lives and dreams that got touched upon that I felt could’ve been explored in a bit more detail.

There are also some scenes at the start of the book mostly where Elliott and Simon are together and due to the way it was written I had the hardest time remembering who was who. It got a bit better as the book progressed, but it was still difficult in some scenes. It got me out of the story a bit when that happened. Not sure if it’s just me or something about the writing, but I just had to pay some extra attention in those scenes.

I also had two small annoyances over some specific events that happened. One is a gift that Simon gifts Elliott. One the one hand I think it was the perfect gift for him, but at the same time I think it’s the type of gift you should never gift someone without asking first. I did like how that gift continued to play a role so overall I am still happy how that played out. The second thing is how it was suggested that being a loner / not having much interaction with real life people was inherently bad. And while I do think Elliott was a bit lonely and could use the extra human contact, that message still bothered me a bit as I do think it’s possible to be a loner or not go out often and be happy.

To summarize: I had fun reading this book. It’s a MM contemporary romance with a bit of a slow build and a bit of heat. I liked the bookish theme with Elliott being a booklover and setting up the little library and how that was part of the story. I did have some trouble getting fully pulled into the story at times and would’ve liked to have a clearer idea of what Elliott thought and felt at times. There were some scenes with Simon and Elliott together were I got confused about who was who, which was a tad confusing. I did like the romance between these two and liked them together, they made for a great couple and I liked how caring they were. All in all I had fun with this book and would recommend it if you’re looking for a fun MM Contemporary Romance with a slight bookish theme.

Tell me about a book that had a bookish or library theme?

2 responses to “Review: The Little Library by Kim Fielding”