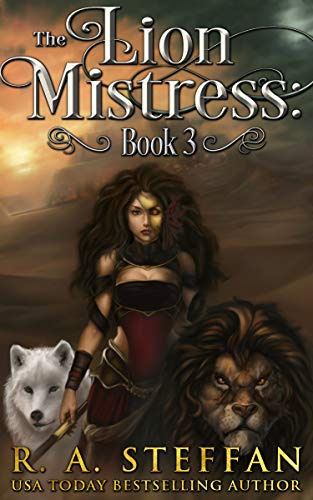 The Lion Mistress: Book 3 (The Eburosi Chronicles #7)
by R.A. Steffan

Blurb:
For the revolution to succeed, he’ll have to make the ultimate sacrifice.

Favian of Draebard has been a Seer since he was thirteen. His visions are never wrong.

Now, he’s leading a slave revolt along with a crazy shapeshifter, a ghost with an attitude problem, and the most stubborn, amazing woman he’s ever met.

The good news is, it looks like they might succeed.
The bad news is, he’ll have to die before they do.

But if Favian tells the others what the future holds, he knows they’ll move heaven and earth to stop it happening—even if doing so sentences untold thousands to subjugation and slavery at the hands of an evil tyrant.

He’d always suspected that destiny could be one seriously cold-hearted bitch. Now he’s sure of it.

I was curious to see how this series would get wrapped up and eagerly started reading this book. Book 3 was a great ending to this series. We see the main characters join the slave rebellion and fight for what they believe in and we see some other familiar faces as well. It was a story focused read with quite some tension and build up as we come closer to the moment they storm the palace. There’s still some room for the romance as well and to see how the characters deal with this together.

The Lion Mistress Book 3 is a bit more story focused than the previous two books. A lot of the character development and relationship building has been done in the previous books and with the slave rebellion gaining strength and moving forward a lot of the story focuses on that. I liked that earlier in the book there’s still a great scene of the three of them relaxing when they visits some ancient stones and the accompanying hot springs it was a nice break from the tension and more story focused pace. As for the rest of the book until the end there aren’t many of those moments. I kinda missed seeing them just be together, but it made sense with the focus and scope of the story.

It was exciting to see how this goal that Kahtrael always worked toward finally come true. It did at times feel more like her quest than that of the others. And in some way I could relate the most to Favian’s perspective who at first mostly goes along with it because of the others. While the whole slave rebellion was a great goal it just wasn’t able to make me care as much as the battle for north Eburos did at the end of the horse mistress. Nevertheless I was still plenty invested in the story and these characters even if I cared less for the city of Rhyth than Dreabard.

I liked how later in the story Favian takes a more active role in the rebellion and we see how spread his faith among the people of Rhyth. I also appreciated how the events and way things happen felt quite realistic. This book also has quite some focus on Favian, who has seen a vision of the future and knows what’s going to happen to him and knows that he can’t tell anyone. Favian is one of my favorite characters in this series and I was afraid to find out what would happen to him, but tried to trust there would be a happy ending of some sort. I just couldn’t see how. All I can say is that I thought it was handled well. Although the whole vision and spirit world thing still stays a bit vague at times.

There are some interesting developments toward the end of the series, some big events and some exciting twists I hadn’t expected. There is also an interesting twist or actually two surrounding Kathrael’s spirits, but one of those felt a bit late. While it made sense given the events, I still would’ve liked to see things develop a bit more there as it felt a bit sudden now. It felt slightly off this way for me somehow.

It’s definitely a great ending to the series. It kept my attention and I was both exciting and a bit afraid to see how everything would play out. The big plot points are wrapped up, but still enough details are left open so you can image what will happen next. The ending is great and there is a bonus epilogue story in the box set that shows another sex scenes and a glimpse of the future. I like seeing how these three stuck together and are there for each other, even with the more story focused plot it’s still clear how close they are.

I also was pleasantly surprised to see some familiar faces form the Horse Mistress series again. It was a nice touch and I like how closely these series are intertwined and I would recommend to start with the horse mistress series.

To summarize: This was a great ending to the lion mistress series. It was with both excitement and a bit of fear that I followed the three main characters as they prepare to battle for the freedom of the slaves. This book is a bit more story focused than the previous two, which makes sense given the focus. There is a great scene with the three of them relaxing early on toward the start, but besides that it’s more story focused. I like how close these three are and how much they care about each other and that’s clear throughout the whole book. I liked how this book wrapped things up and the ending was great. It was fun to see some familiar faces from the horse mistress books as well. This was a great series and I am excited for the Dragon Mistress series which comes next!

2 responses to “Review: The Lion Mistress Book 3 by R.A. Steffan”