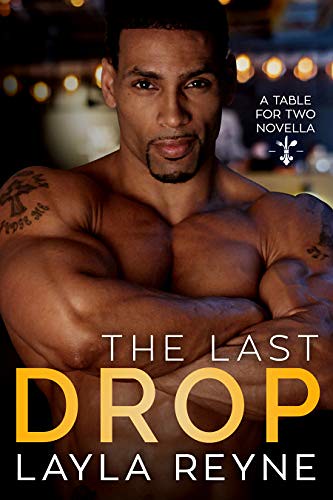 The Last Drop (Table for Two)
by Layla Reyne

Blurb:
Three restaurants, three flops. Chef Gregory Valteau doesn’t want to believe it’s a sign, but his culinary future in New Orleans looks bleak. Until he meets a handsome hipster with all the right moves, behind the bar and in bed. Gone the next morning, the sexy bartender leaves Greg inspired and wanting more–of him and his creative cocktails.

Anthony Monaco has spent five years on the go, but a steamy NOLA night with a sexy chef has Tony aching for a return trip to the Big Easy. When Greg offers him the chance to help launch a new gastropub, Tony can’t turn it down. But six weeks is all he’s willing to commit. Any longer and he might not be able to leave, especially working beside temptation-in-a-chef’s-coat every day.

As Dram prepares to open and the chemistry between them boils over, Tony’s fears come true, his heart whispering stay while his brain shouts go. Greg can’t abide by the latter; he wants Tony in his life and behind their bar. He’s the one, but to keep him, Greg will have to convince Tony he can show him the world without leaving the one they’ve built together.

The Last Drop was originally published in the Heart2Heart Anthology and has been significantly expanded with new content. It is a stand-alone foodie romance novella featuring lovable main characters and all the tasty food, cocktails, and romance you could want in a short and sweet, low-angst read.

The Last Drop is a quick romantic read. I really enjoyed reading this one. Greg and Tony meet each other in a bar one night. They are attracted to the other and after some flirting at the bar they have a one night stand. Tony leaves the next morning off to his next destination, he doesn’t stay in the same place long and never returns to the same place. Greg wakes up inspired the next morning and has this idea of a new restaurant. Months later he sends out an ad hoping to reconnect with Tony and have him be his business partner and maybe more.

I liked this novella and had fun reading it. It’s a fun short read with a great romance and I liked the focus on food. It was short and I while would’ve loved to read more about Tony and Greg, it didn’t feel rushed. I mostly wanted more as I liked what we saw of them. The author paced the story well and I liked how it developed. The author did a great job of building the characters and their romance within a shorter read. I felt like I still got a good feel for the characters and their personality and I could feel the chemistry between the characters.

I liked how this book was low on the angst and drama. There were a few things the characters had to work through, but due to the short length of the book this was all resolved relatively quick. The book starts with a steamy scenes and there is a bit of heat later on as well. There are also some getting to know each other scenes and I liked when Tony opened up to Greg about why he kept moving and how Greg convinced him to stay here with him. I liked reading about these characters and getting a feel for them. And they were great together. Their chemistry was clear from that first meeting. And then when they work together and try to keep it professional it was clear how much they both wanted more. I liked reading about these two and seeing their dream of this restaurant become reality and them find happiness together.

I liked how just as in Dine With Me food plays a central role in this story as well as drinks. The book starts with the two of them bonding over drinks and there are plenty more scenes with food and drink in the rest of the book. I like how much this was part of the story.

To summarize: The Last Drop is a fun romantic read with a bit of steam. Tony and Greg meet one night at a bar where tony is the bartender and they have a one night stand afterwards. Months again Greg reaches out with an idea for a new restaurant and he wants Tony to be part of it. The chemistry between these two was clear from the start. I liked how we got a feel for both characters and their romance was great too. Due to the short length things do get resolved rather quickly, but it didn’t feel rushed or like something was missing. I liked the focus on food and drinks in this book. All in all I would definitely recommend this one.

2 responses to “Review: The Last Drop by Layla Reyne”