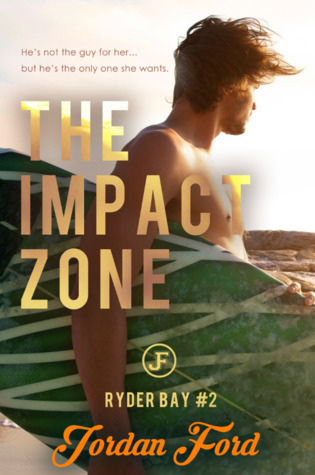 Blurb:
A nomad. A wallflower. A riptide of romance…

Savannah enjoys living in the shelter of her best friend’s shadow. But when a mysterious accident sends her BFF into a coma, Savannah is left adrift. In search of a hobby to distract her, she takes up surfing but can’t keep her eyes off the hot new guy hiring out surfboards on the beach…

Griffin dreads the impending moment when the life he left behind washes up on shore. But the more time he spends with the irresistible Savannah, the easier it is to ignore his past. As he falls hard for the newbie surfer, he hopes the undercurrent of his secret doesn’t pull them both under.

As Savannah finds her voice, Griffin’s fear forces him to pull away. Can they overcome their past to keep their passion afloat?

I really enjoyed Over The falls, the first book in this series and I excitedly started reading The Impact Zone. The Impact Zone is a great sequel and I like how it has a different couple, but also continues certain plot lines from book 1. I didn’t enjoy it as much as book 1, but I still had a great time reading this and I was happy I got to return to Ryder Bay. It’s interesting how this story starts a bit before the end of book 1 so you get to see some parts again from a different point of view now.

The Impact Zone follows the story of Savannah and Griffin. Savannah is the ex from the male main character in book 1 and at the start of this book she is missing him and would like to get him back, but then she slowly sees his new girlfriend is great for him and she finds love elsewhere. In book 1 I already said I was happy the author didn’t villainize Savannah and that makes sense knowing that she was the main character of book 2.

In The Impact Zone we see how Savannah struggles a bit with how she lost Aidan and now he has moved on and she isn’t sure what to do. Her best friend lies in the hospital and she is a bit lost. I liked seeing how she dealt with everything thrown her way. She really is a good person, putting aside her own feeling to help others. She always was a tad too perfect at times, but she does have her struggles too. I especially liked how she reached out to Harley in this book and they form a tentative friendship. I didn’t feel her love for surfing as much as I experienced in book 1 with Harley, but it was fun to see the surfing theme continue, although it was a less prominent part here.

Then there is Griffin and while I liked him, I think he’s the reason I didn’t fully enjoy this book as much as book 1. He seemed like a great guy, but he just wasn’t as interesting to read about. He has a bit of a sad backstory and he is wondering whether to leave Rydar Bay and that’s basically what a lot of his point of view is about. He loves it here and wants to stay, he has a great job and is falling for Savannah, but he knows he might have to move on. There was no progression for a long time and it just felt a tad repetitive. Then at the end things finally change and it almost seemed to easy, especially knowing how he has been struggling with this for the whole book without progression. And I didn’t get why he never looked into his options. I also am not a fan of the will he stay or not plot line in general.

Griffin and Savannah are both quite mature for their age with what they have gone through. I thought it was great to see how they dealt with things, but at times they did behave a bit unlike teenager for that reason, there were a few moment I thought a teenager would never do or say that. But as they are quite mature it does sort of make sense.

Griffin and Savannah made for a great couple and while I didn’t feel their romance as much as Aidan and Savannah, their romance did grow on me and it was obvious they cared about each other a lot. I liked the way the author described the giddy feeling Savannah had when she starts falling for Griffin.

I love the continuity in this series so far. There are plot lines and characters that got introduced in book 1 that play a role in book 2 as well and I liked seeing those plot lines continue. There are also side characters that stay more to the side in book 1 that we get to see more of here. And other side characters that we see from another side in this book. And I was happy we still got to read about Aidan and Harley even tough they aren’t the main characters and we see how they’re doing too. Then there is the plot line surrounding Skylar that seems to continue too and I think she will be the main character for book 3.

To summarize: I was happy to return to Rydar Bay in this second book of the series. There is another couple that becomes the main focus, but the series has a lot of continuity so far and storylines and character from book 1 continue and return here. I liked Savannah she was such a nice character who helped others even at the cost of herself. I liked reading about her, although she was almost too perfect at times, we see how she struggles with things as well. Griffin was a nice enough character, but I wasn’t as interested in his plot line/ backstory. It felt like it got a bit repetitive and didn’t continue much over the course of the book, until at the end it does and it seems almost too easy how it gets solved. Griffin and Savannah made for a great couple and I was happy to see a bit of Aidan and Harley as well in this book. All in all it was a great sequel and I am looking forward to book 3!

6 responses to “Review: The Impact Zone by Jordan Ford”