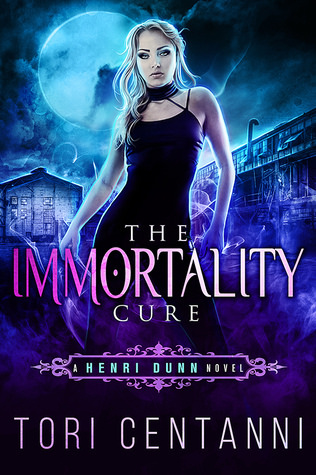 Blurb:
Henri Dunn was damn good at being a vampire until her immortality was forcibly ripped away from her.

Six months ago, Henri was made into an unwilling test subject for serum V-504: The Immortality Cure. Now, after almost a century of being an immortal monster, Henri is human again and she’s not loving it: her body aches, she has too many mortal needs, and the other vampires shun her as a Blood Traitor. All she can do is keep her head down and bide her time until she can find a way to get her immortality back.

When vials of the serum are stolen from the lab and a vampire is murdered, Henri is the first person the vampires suspect.

With the help of a melodramatic vampire “king” and his mortal groupie, Henri must find the real killer to clear her name or be executed for a crime she didn’t commit.

The Immortality Cure is the first book in the Henri Dunn Urban Fantasy Series.

When I first heard of the Immortality Cure it was the premise that made me curious, I mean have you ever read about a vampire that gets cured of her vampirism? It just sounded to original and I knew I had to read it. The Immortality Cure lives up to what it promises, it’s a fun urban fantasy book about vampire Henri who suddenly is no longer a vampire. And she badly wants to become a vampire again. Soon she’s caught up in a murder mystery while trying to find a way to become a vampire again.

It’s mostly an urban fantasy, with a bit of mystery thrown in. There is no romance, at least not yet. A few possible hints that it might happen in the next book, but I am not sure yet. I thought the mystery was a nice touch, although it wasn’t as good as some of the mysteries I read, it still added something extra to the book. And there were a few interesting twists and turns towards the end. Enough plot threads are left open at the end for the next book, but the murder mystery does get solved.

I liked how the book dealt with the topic of Immortality. The vampires are pretty much what you would expect from vampires, but the existence of a cure adds something new to the plot. Vampires don’t want to become human again and are afraid of the cure, while others would love to be human again. Having Henri be a human who was a vampire made for an interesting perspective as she now has to deal with all the human inconveniences and knows what it was like to be a vampire.

Henri was a nice enough main character, she had an unique perspective seeing as she was a vampire until recently. And it was interesting to see her deal with being human now and how she saw the vampires. I just would’ve liked to see a bit more of her character and get to know her better. I would say this book is mostly story focused and I just finished a character driven book before this, so that’s probably why it felt like that was a bit lacking here. There was something she did later in the book that bothered me a bit, but luckily it bothered her as well. It just felt wrong. And a side character that suddenly had a bit of a personality change. There are some interesting side characters introduced and I am looking forward to seeing more of them in the next book. Especially Naha and Caz, it seems like there is more to them than what we’ve seen so far.

One thing that bothered me a bit is how halfway maybe a bit later in the book there is a bit of world building added that seemed so normal for the characters that I didn’t get why this wasn’t mentioned from the start. And then there is nothing that gets done with this piece of world building, so I wonder why it was there. Maybe for the next book? There’s also a plot line that is left a bit open at the end were I hope we’ll see more of in the next book, although it might just end here, who knows.

To summarize: I enjoyed the Immortality Cure, the premise is very interesting and original. I liked seeing how the topic of the Immortality Cure was handled. Henri offer an unique perspective as she’s a human who used to be a vampire and I liked seeing her point of view. I just had hoped for a bit more character depth, but that might be because I just finished a very character driven book and this one is more story focused. The vampires are pretty typical for what you expect of vampires, but the immortality cure showed how they would react when something threatens that immortality and how they react to Henri. It bothered me a bit how a piece of world building was added pretty late in the book as I felt like it could’ve been introduced earlier. The mystery was a fun addition and there are some interesting twists and turns at the end. I am looking forward to the second book!

10 responses to “Review: The Immortality Cure by Tori Centanni”