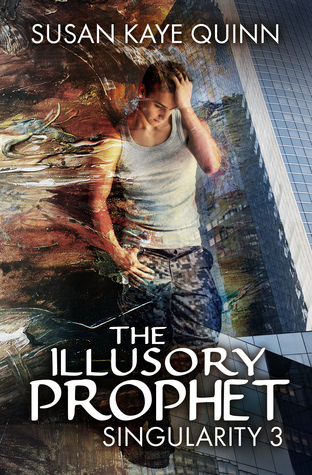 Blurb:
What if you could paint with reality?

Elijah Brighton can bring a girl back from the dead, travel outside his body, and absorb a lifetime of memories from anyone he touches in the fugue state. Everyone seems to think he’s the prophet they’re waiting for… including the girl he’s falling in love with. The truth is, the fugue is bleeding over into reality, bringing his sketches to life and haunting him with visions of a girl in metal armor. She stabs him with her blade and denounces him as any prophet worth the name—and it’s not like he disagrees.

People who change the world generally aren’t losing their minds.

He just wants to hide out in his tent and kiss Kamali, but a vision of his death and an attack on the Human Resistance Movement convince him something bigger is coming. Maybe Augustus—the power-mad ascender he barely defeated. Maybe the Makers, a tinkering cult with their own kind of ascendance. But when his best friend Cyrus disappears, questions of destiny and prophethood will have to wait—because the fugue is always showing a version of the truth, and Eli must discover that truth before his terrifying visions become reality.

The Illusory Prophet is the third book in the Singularity series. This young adult science fiction series explores the intersection of mind, body, and soul in a post-Singularity world.

This was such a great read and I thoroughly enjoyed it! It’s been a long wait for this book, but it was so worth it. And while it was quite some time ago that I read book 2 I easily slipped back in to this world and there were enough reminders and recap to help me along. I really like Susan Kaye Quinn her writing style, her stories flow so well and once I started reading I didn’t want to put it down.

The Illusory prophet follows main character Eli, who is such a great main character. I really like him. At the end of book 2 he did something big and now the resistant camp members are holding their breath in anticipation of his next move. But Eli just want to take the time to incorporate what happened and give it a place. He seems so normal and down to earth at times and relatable, while at the same time he is anything but normal. He is slowly starting to become someone important and people have expectations about him, but he isn’t quite sure what to do with those expectations. This book is mostly about how he deals with this and finds his place a bit.

Eli changes and develops a lot in this book. He slowly is getting used to the expectations people have of him, gets more comfortable with the powers/ gifts or whatever it is that he has and he keeps figuring out what he can do with or not. He is finding out who is and who he wants to be and what he is going to do. It was great to see the change in his character and how the events that happened changed him, but also how he himself decides to change things and step up. This book gives us some big answers and at the same time only creates more questions. And with how the book ends and seems sets the stage for the next books I am only more curious to see how this series will proceed.

There is a rich cast of side characters and I could easily remember who was who as everyone has their own personality. We see more of Cyrus, who is Eli his best friends and he’s such a great character. There are some changes in their friendship in this book. There also is a new character Miriam who we meet in this book and while she plays an important part here I am even more curious what kind of part she will play in the rest of this series.

Then there is Kamali, Eli his second (the term for a relationship in this book) and these two are so great together and I love how the romance was a part of this book. It was natural and felt subtle at the same time, but it also was an important part and it’s nice to see them being in a relationship compared to other books where you often only get the part before they actually get in a stable relationship. There is little drama and I liked how Susan handled the romance. I totally felt their connection and loved the scenes with them together.

Susan Kaye Quinn mixes sci-fi in a post singularity world with religion and even hints of philosophy. This series is about what it means to be humans, what a soul is and who has a soul. As well as hinting to some religious questions like is there a god and how does Eli fits in with all of this. Is he a prophet or is he just a normal boy who is something more? And what are the miracles he performs? And while reading this book the blend between religion and sci-fi actually seems normal. It was only while reading the acknowledgements that I realized how unusual and daring this mixture is. But Susan handles it with so much grace that while reading this blend of topics almost seems normal. The religion aspect is handled without being preachy, it’s more in an exploratory or philosophical approach. And it totally works.

To summarize: The Illusory Prophet is probably one of my favorite reads of this year. It was such a great read that caught my attention from the first page and kept it till the last one. And I can’t wait till I have book 4 in my hands. There are changes, answers and more questions in this book. Eli, the main character changes a lot in this book and I liked seeing him grow into his own person and figure out his place in the world and the rebellion. But at the same time he’s also just a normal human, but also so much more. There is a bit of romance that fits the story perfectly, it’s subtle, heartfelt and with little drama. There is a great group of side characters who each have their own personality. This series blends sci-fi elements seamlessly with religion and philosophical questions without it being too much. It feels almost natural the way Susan blends these elements together and it totally works. And with the way the ending leaves things I am so excited for the next book. It feels like the stage is set for the next book and I want to know what is going to happen next.

What’s the last YA science fiction book you read?

18 responses to “Review: The Illusory Prophet by Susan Kaye Quinn”