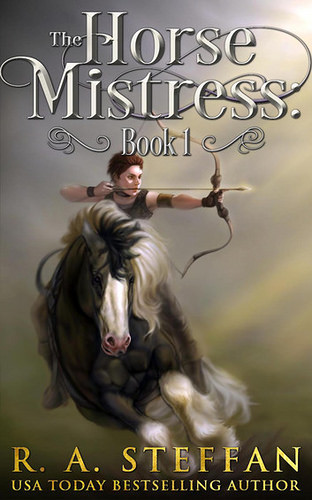 The Horse Mistress: Book 1 (The Eburosi Chronicles #1)
by R.A. Steffan

Blurb:
Carivel’s secret could save her people. It will also destroy her life.

She was born female, but she has been secretly living as a boy for years in her adoptive village of Draebard, doing a job the elders insist can only be done by a male. The last thing she needs is to fall for not one, but two unattainable men—a fierce warrior and a reluctant wolf-shifter with a horrific past. Now, the Alyrion Empire is poised to invade, and Carivel must choose whether to keep her secret or reveal it—not only to the men she loves, but also to the powerful female ruler whose army could help protect Draebard during the coming war.

Perfect for open-minded fans of ménage and reverse harem romance, The Horse Mistress: Book 1 by USA Today bestselling author R. A. Steffan combines detailed world-building, and a heartfelt romance between three noble, damaged people who have no one to turn to but each other.

Author’s note: This book contains sex. The sex is not vanilla. Some of it is between two men who love each other. If any of those three facts made you go “Eww,” please do the author a solid and don’t download this book.

This series has been on my wishlist for a while now, as it sounded like a series I would enjoy. When I won a copy of the the box set containing the entire series I was determined to finally get around to reading it. It still took me a while longer, but I finally picked up book 1 now and I am glad I did as I really enjoyed this one.

The Horse Mistress Book 1 takes place in a fantasy world on the island Eburos. It follows the story of Carivel, who is a women, but disguises herself as a man so she can work with the horses. As in this village they believe only males can tame the spirits of animals. Her life changes when an attack hits the village she lives in and she has to go to another village to ask them for aid. Her two companions are the two men she has a crush on.

The author nicely mixes the story, world building and romance elements together into a compelling story. I liked how every element gets the attention it deserves. The story is interesting and while in a sense this really only feels like the first part of this series it grabbed my attention and I wanted to know what would happen next. We get to know enough about the world of Eburos to get a feel for how the world works, although I would’ve loved to see a world map to better visualize what the island looked like. The romance and the characters were all so well done and I really enjoyed reading about them.

Carivel is easy to like immediately. She hasn’t had an easy life, but she made the best of it she could and she gets to work with the horses. She works hard and I liked reading about her and how she interacted with the horses. I am pretty sure the author knows a lot about horses by the way the horse scenes were written. I kinda like the whole female disguises herself as a male trope and in Carivel’s case it’s even more complicated. While she has a female body, she feels like a men for the most part. If I understood things correctly, she wouldn’t want to have a men’s body, but she wants to act like a men for the most part. I think she just wants to be accepted for who is she is and how she wants to act. And it’s beautiful to see when she finds that acceptance with the two men she is falling for.

Andoc and Senovo are the two men Carivel falls for. From the start of the book they are already in a relationship with each other, but as the story progresses it becomes clear they would like to be close to Carivel as well. I liked how different these two are. Andoc is this tough warrior, the second ranked warrior in the village, but is also very caring, which I liked. He can joke, but also takes things seriously. Senovo is more quiet and less outspoken than Andoc. He has this secret he has been hiding for years and he struggles to keep it hidden and control that part of himself. I felt so sad and angry about what happened to Senovo and how he became a priest, his past is truly sad and horrifying.

I really liked the romance in this book. Senovo and Andoc already are in a relationship and Carivel grows closer to them in this book. There is basically no drama and I liked how things progressed between them. Carivel is a bit hesitant at first, but it’s clear it’s only a matter of time before she gives in. It was great to see how they grew closer to each other in this book when they had to spend time together. They discover each others biggest secrets early on in the book so they quickly have a bond and trust between them. I liked this and that their secrets got revealed so early on to each other.

There is a bit heat between the two men and with all three of them in bed toward the end of this book. This book contains LGBT elements and some BDSM and a reltionship involving two men and a women who all care for each other. The sex scene(s) toward the end was my favorite, it was pretty hot and well written. What I actually liked most about the sex scenes was how caring they all are. They paid attention to each other and what they liked and didn’t. They stopped when someone didn’t like something and also communicated during the sex scenes to make sure everyone was on the same page. I loved that. It’s amazing to see how caring and considerate they all are. It was beautiful to see how they fit together and made this thing between them work.

The world building is done really well too. There are mentions here and there about how they handle things and while it’s a fantasy world based on an earlier time in our world, there are also differences. Things like how shifters exist and the role of priests. There were also different tribes with different values and different manners. We mostly get to see two villages, but also hear about some others. And while we only get a small glimpse of this world, it was enough to get a feel for how things work and I am looking forward to learn more about this world.

To summarize: I really enjoyed this book. The author nicely balances the different elements together, with an engaging story, well done world building and great characters and romance. I liked Carivel and the two men she falls for. I liked how they quickly grow to trust each other and I liked seeing them grow closer together. There is a bit heat as well and I thought it was awesome how considerate and caring these characters were both in and outside the bedroom. They communicated clearly during the sex and communicated their wishes and stopped when someone didn’t like something. All three of them are interesting characters and I am looking forward to read more about them. The world building is done well with information about the world sprinkled throughout the book. The world came alive with the information we got and I am curious to learn more about the world. All in all this was a great start to this series and I hope to continue on to book 2 soon.

Have you read any books with three people in relationship?

6 responses to “Review: The Horse Mistress Book 1 by R.A. Steffan”