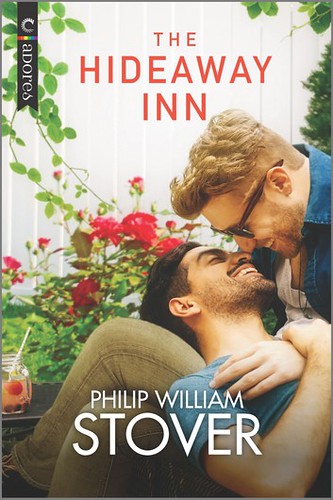 Blurb:
No one in the charming river town of New Hope, Pennsylvania, needs to know that Vince Amato plans on flipping The Hideaway Inn to the highest bidder and returning to his luxury lifestyle in New York City. He needs to make his last remaining investment turn a profit…even if that means temporarily relocating to the quirky small town where he endured growing up. He’s spent years reinventing himself and won’t let his past dictate his future.

But on his way to New Hope, Vince gets stuck in the middle of nowhere and his past might be the only thing that can get him to his future. Specifically Tack O’Leary, the gorgeous, easygoing farm boy who broke his heart and who picks Vince up in his dilapidated truck.

Tack comes to the rescue not only with a ride but also by signing on to be the chef at The Hideaway for the summer. As Vince and Tack open their hearts to each other again, Vince learns that being true to himself doesn’t mean shutting down a second chance with Tack—it means starting over and letting love in.

In The Hideaway Inn, Philip William Stover begins the story of a diverse group of characters finding love without boundaries and across the Seasons of New Hope.

I received a free copy of this book from the publisher through Netgalley. I am voluntarily reviewing this book.

The Hideaway Inn caught my attention when I stumbled upon it and I decided to give it a try. I really like a well written second chance romance, add in the whole renovating the inn plot line and this sounded like a great read.

Hideaway Inn is set in the small town New Hope. Vince returns to the town he grew up to to turn a quick profit, his goal is to renovate The Hideaway Inn and then sell it to FunTime, a big company who likes to buy properties like those. Falling back in love with Tack who broke is heart was not on the planning, but that’s exactly what happens.

There was a lot I enjoyed about the book, but also plenty of things I didn’t enjoy .It’s this strange mix where I can’t figure out quite what to think, but mostly I still had fun reading this one, so I went with a 4 star rating in the end. Overall I definitely enjoyed it, the writing style is pleasant, the story interesting, plenty of sweet moments, Tack was a great character, there were some fun side characters as well and I liked the renovating plot line and even more so the foodie aspect that I hadn’t expected to find in this book. Then on the other hand I felt some parts lacked the emotional depth or I wanted to see them explored more, Vince wasn’t likable for most of the book, but I mostly felt sorry for him and on top of that I didn’t fully feel the romance. So yeah plenty of great parts and plenty of not so good parts.

While the renovating the inn plot line is the set-up for the couple meeting again, I was surprised that there wasn’t more about it. I wanted to read more about the decisions Vince was making, how he fell in love with the place and how they were renovating the inn. On the good side there was quite the focus on food and the recipes Tack was trying out, which I hadn’t expected, but I really liked reading those scenes. Tack’s passion for cooking really shines through.

On the topic of Tack, I really liked him. Tack is the love interest and we get a few chapters form his point of view as well. He was sweet and determined. He had a kid and he worked so hard to give them a good live and the freedom to choose who they wanted to be. I liked his passion for cooking and how he was going to culinary school as he wanted to learn more. He had made mistakes in his past, but he became a better human being, came out to everyone as bi and now seemed comfortable with who he was. He know what he wanted and wasn’t afraid to go after it. I liked how chapters the most as I enjoyed reading about him and his point of view.

Vince on the other hand was much less likable. I mostly just felt sad when reading about him. He was this skinny skid who loved to read and got bullied badly. Then the boy he fell for didn’t stand up for him and broke his heart. He got hurt so badly that even now about 15 years later if I am correct he’s still dealing with all the emotional baggage. He did feel younger to he at times than the 35 he was supposed to be, but on the other hand I do think it makes sense for some things to stick with you this long. He just didn’t seem happy at all or have things he cared about and I wasn’t sure how he managed to go through life like that for so long. I felt so sorry for him it was just so sad to see how he still struggled with how he was bullied and now he is this uber masculine version of himself who hides behind a mask so no one can ever hurt him again. On top of that he also was quite rude at first, he acted like this rich entitled person. It just felt like presenting this put together masculine image was all that mattered to him. And it was just sad that he didn’t feel like he could be himself.

Vince did become more likeable during the story when he slowly let his mask fall away and opens up a bit to tack, but I just never felt like he let Tack in all the way. I wish he would’ve told Tack more about himself and who he was now. I also wanted the change to be a bit more subtle, start a bit earlier and see more of his changed self. It was great to see Vince realize this was no way to live and change, but by then it both felt like too little too late and too sudden. It was like this one realization let him to change his whole life. And I wanted to see more of the process and how he was to work to really shed that image and become who he wants to be.

So with how I felt about the two main characters, it was a bit hard to feel the romance. Frankly I wouldn’t have blamed Tack if he would’ve ditched Vince after Vince is so rude to him, but Tack clearly is a good person and believes the Vinny he knew is still in there and sticks with him. Even though Vince can’t even say a nice word about his cooking or him helping. And Tack helps him a lot and never asks for anything in return except for Vince to give him another chance. Tack was so sweet and Vince could be so harsh, but when that slowly begins to change there were some great scenes. I would’ve liked they opened up a bit more and talked a bit more about how they were feeling. The mutual attraction is clear from the start and there’s a lot of talk about sex and lust, but there are only a few sex scenes written out and the rest is all fade to black. There are some sweet moments where they connect that I liked the most about their romance.

What I liked the least was the obligatory break-up scene. Everything I hate about obligatory break up scenes was fit in there. There was plenty of miscommunication, lack of communication, acting out of character and this big blow up after which ofcourse Tack had to bridge the gap again. The whole scene just felt off and forced and stilted. I did like that while Tack bridged the gap, Vince also has to show he was in this and I did like the scene at the end where they get together again.

The focus on this book mostly is on the two main characters, but there’s a group of fun side characters surrounding them. Vince doesn’t really have anyone in his life that’s close to him, but he has some people in new Hope that he still knows and gets to know. There was the bookstore owner that Vince knew as a kid and I liked how she saw right through him and gave him some good advice too. And Anita who works at the Hideaway Inn and I liked how she handled both Vince and Tack and got them on track a few times. Then there was Jules who is Tack’s kid, I really liked reading about them and how they grew to like Vince as well.

I liked reading about this small town and the characters in it. And I am excited to hear there will be more books in this series.

To summarize: This was a sweet and fun romance to read set in a small town. I enjoyed reading this book, the writing style was well done and I liked the story and the foodie type scenes that were in the book. I would’ve liked to see more about the renovation. I really liked Tack, the love interest and I am glad we got some scenes form his point of view. I liked who he was and how he made mistakes, but now was a better person and how hew really seemed to know what he wanted out of life. Vince was hard to like, I mostly just felt bad for him. He got bullied as a kid and now has this uber masculine persona and I felt bad he couldn’t just be himself. He could be quite rude at first. It was great to see him slowly change, but it felt a bit too sudden and I would’ve liked to see a bit of the progress. I had trouble fully feeling the romance at times, but these tow were good together and I liked that they got their second chance. There are some sweet moments between these two. There are some fun side characters and I liked reading about this small town.

4 responses to “Review: The Hideaway Inn by Philip William Stover”