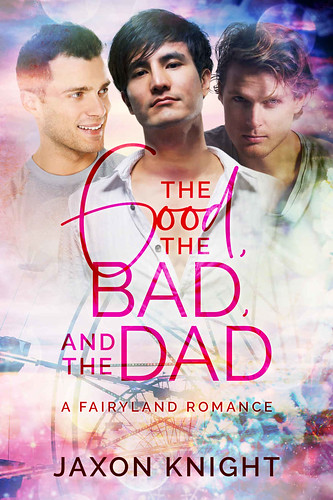 The Good, the Bad and the Dad (Fairyland Romances #4)
by Jaxon Knight

Blurb:
Haru is a single dad, a widower, doing his best to balance his career and raising his little girl, Minako. Thankfully Fairyland theme park is a haven for both of them. However, when both a prince and a pirate start courting Haru, his balancing act gets a lot harder…

Cillian plays a pirate at Fairyland theme park and he loves playing the rogueish character in and out of work hours. The last thing he wants is to settle down with a guy with a kid, so can’t he stop thinking about handsome single dad Haru. And why can’t he stop looking at pictures of Prince Magnificence and his stupid symmetrical face? And why does he keep running into both of them?

Grayson feels he’s found his home in the role of Prince Magnificence, but he’s more likely to run from love than seek it out. Until he meets Haru, that is. Christmas is complicated by Grayson’s role being featured in a special Christmas celebration. Not only that, but his feelings for Haru, and his possible rival Cillian keep on growing. Maybe it’s time to stop hiding who he really is?

The Good, the Bad and the Dad is a sweet MMM romance featuring a single father, a rogue and a trans prince with a heart of gold. No cheating, just the tentative first steps into polyamory.

I am always happy to be back in the fictional theme park of Fairyland and this was another fun read in this series. This book features three characters instead of the usual two and I was curious to see how the author would handle that. There’s Haru, Minako’s father whom we’ve met in earlier books, Prince Magnificent who made a short appearance in book 3 and then there’s a totally new character Cillian who is a pirate in the park.

I thought the start of this one was a bit slow, with three characters to introduce and they all have their own lives, work and friends it took a bit of time to get the romance started and even then everyone had to meet everyone else. Once that all was done the pace improved and I was curious to see how these three men would make it work.

All three are interesting characters and I liked how different they were. Haru being a single dad, he is very focused on making his daughter Minako happy and working hard to provide for her and then taking her to fairyland for fun days. Then there’s Grayson who is the good one from the title, he’s a nice person, friendly and seems to enjoy his role as prince Magnificent. Cillian plays a pirate character in Fairyland and it was fun to see more of the pirate part of the theme park and his pirate character. He is the bad one from the title, with a bit of that roguish charm and he likes to be in the spotlight, but really he is a kind character as well and can be very sweet too.

While I had fun reading this, I felt like there was something missing to really push it to that really enjoying feeling somehow. I can’t fully say what it is and maybe it’s just my weird reading mood.

I thought it was great to see a polyamory relationship in this book. It follows a bit of a different pattern than the previous books because of it. And it was interesting to see how the characters handled it with slowly only getting used to the idea of polyamory and then seeing if everyone was interested in that and there’s some conflict mainly from Haru who isn’t sure how it would work and what others think. Which all felt quite realistic.

I did think the way the relationship developed felt a bit off at first, with how both Cillian and Grayson were focused on winning over Haru and then realized they liked the other as well. And later Cillian and Grayson did spend some time together, but at first it seemed to be a bit too much focused on Haru, while at the same time I almost thought the other two were more interesting. And maybe the way their relationship develops is totally realistic, but something about it, didn’t quite work for me. I thought the book was almost a bit too short to fully develop the relationship between these 3.

Once they get past that first stage though I did really like these three together. My favorite scenes where when they all 3 were together and often even with Minako there as well and they were all there for one another. They did fit well together and I liked how they obviously cared about one another. I was a bit disappointed that Haru would take the easy way out and while I liked how Grayson and Cillian fought for him, I almost thought there wasn’t as much from Haru to them. With how their relationship and how unconventional it was is a point of conflict in the book I would’ve liked to see a bit more of how they deal with things going forward as it felt like there was more story there.

Besides the three main characters there is a big role for Minako as well, as she’s Haru’s daughter she’s an important part of the book. I really liked her, she’s well behaved, but also has a big personality and I liked seeing how she didn’t judge her dad or thought having two boyfriends was weird, it was quite refreshing to see how simple she saw it all. There also were some great scenes with how Grayson and Cillian interacted with her.

Another thing I really like about this series is how we still see characters from previous books, I think all the main characters from previous books are there. Grayson talks with Nate and Dash a few times as they work at the same place. There also is a fun scene with Dean where he gives some advice and talks with Cillian, which was fun. There is a scene with Cody, but then we don’t hear much about that later anymore, which was a shame as I would’ve liked to see Grayson talk with him. Max and Charlie have some apprentices as well when people dine at Charlie’s restaurant and Max is involved with the park and talks with Grayson during the book, which was fun to see.

Then there is a whole group of new characters as well, like Julia, Grayson’s princess in the park. Cillian has a best friend called Link as well as some other characters he interacts with while in his role as pirate. I liked seeing a bit more of the pirate part of the park and pirate characters as there wasn’t as much about that in previous books. And Haru has his daughter Minako and he knows his way around the park, he did seem less connected and have few friends than the other two, but that made sense as his life revolved around Minako.

To summarize: This is another fun book in this series. It was interesting how this one features a polyamory relationship instead of a couple. The start did feel a bit slow with 3 characters who had to be introduced as well as their lives and friends. After that the pace was a lot better and I liked these three characters and seeing them grow closer. The way their romance started felt a bit off somehow, with how both Grayson and Cillian focused on Haru and then seemed to realize they liked the other too. Once they got past that I liked the romance a lot more and they did seem to fit well together. There are some really sweet scenes between them. I would’ve liked to see a bit more of their relationship after they decide to give it a try. The book almost felt a bit too short to fully develop their relationship. It was fun to see the main characters from previous books all have an appearance here too, as well as some new side characters that get introduced. All in all this continues to be a great series and I am looking forward to more Fairyland.

6 responses to “Review: The Good, The Bad and the Dad by Jaxon Knight”