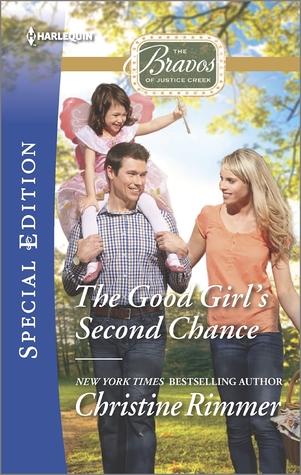 Blurb:
The Littlest Matchmaker Of Them All

Quinn Bravo is a committed single dad;emphasis on single. The millionaire bachelor is focused on his four-year-old daughter and his fitness business. So while he’s intrigued by his beautiful new interior decorator, Quinn resolves to keep the chemistry at a simmer. Until one night together causes their attraction to burst into flame.

After her ex-husband betrayed her, local good girl Chloe Winchester returned to Justice Creek, determined not to risk her heart again. Still, maybe she can live out some teenage fantasies with sexy Quinn while redecorating his house. But first Chloe will have to avoid falling for one adorable little girl and the man of her dreams!

I enjoy Second Chance stories and the part in the blurb about the little girl made me excited to give this a try. This book wasn’t what i expected both in the good and the bad sense of the word. The pace and progression of the story was very original for a romance novel. There was no build-up, they had sex in one of the first chapters and things moved very quickly from there on. I liked the different pace, I didn’t like the lack of build-up as it didn’t make me feel the romance. Then the first 50% was actually pretty okay and I liked how things moved different than in most romance books.

Then the second 50% I am not sure what happened there. The conflict was introduced in the form of Chloe her ex and I did not like it at all. They were suddenly fighting and having weird conversations, trying to make the other see their point of view. And then there was Chloe her mom. And then in the end things got solved so quickly and the book was suddenly over and done with. It was weird and didn’t work for me. The writing style also didn’t fully work for me and I never felt fully into the story or connected with the characters, which was a shame. It was more like watching from afar. And then there the the redecoration of the house plot and Chloe her work, that more felt to add a bit of background to the characters, but I never really felt like we got an insight in what was goign on and what she was doing.

The characters were okay, they were nice and likeable, but I never really cared for them. They just fell a bit flat. Chloe was the good girl who did what her mom wanted and ended up in an abusive relationship. Now she’s back in her hometown and she get’s a second chance at love. Quinn was the slow kid in school, but made a name for himself with fighting and now is taking it easy and building a life with his daughter and one of his friends who helps take care of her. He was a bit too possessive and thinking he could solve everything, while Chloe wanted to solve everything herself instead of let Quinn help. They could be quite frustrating together.

The side characters were pretty flat and just there for their connection with the main characters, although I did like Nell. Apparently this is the first book in the series, but aside form Nell, the other family member and next main characters didn’t get introduced at all, which I think was a missed opportunity. I actually thought it was a standalone until I read it was a series. So yeah the side characters weren’t as fleshed out as I hoped. And I didn’t like the kid as much as I hoped either, I always find children such interesting characters in books and I especially like it in the case of a single parent falling in love. But the kid just wasn’t an interesting character, she kept demanding things and was present in a few scenes, but I never really cared for her, which was a shame.

Like I mentioned before the romance developed very fast and it worked okay, but the fast development made me feel like something was missing. Yes they knew each other when they were kids, but they basically take no time connecting and just jump in bed and the next moment they are talking of marriage and I was just sitting there thinking how did that happen so fast. It went so fast I felt like they skipped the actual getting to know each other part. Sure they made a nice couple, but I never felt it. And some of the sex scenes and kissing scenes were a bit cringe worthy and I skipped over most of them. They didn’t work for me. I didn’t feel their chemistry and while they made a good couple, I just wanted to feel more invested and caring about them and their romance.

To conclude: I liked how this book took an original approach to the traditional romance book pace and story progression. There is no slow build-up, obligatory break-up at the end and then the happy ending. It’s more jumping into bed together, talk about marriage and then dealing with the past. I liked the daring approach, it was different and original and not many romance book are original. Beside that it felt mostly flat, I didn’t much care about the conflict with her ex and her mom and then how quickly it was all solved and rushed up at the end. the characters are nice enough, but stay flat, just like the side characters. And the little girl who could’ve added some spark, felt like a demanding little girl who always got what she wanted. Although she had some adorable moments, I had hoped for more. I didn’t fully feel the romance and the writing style didn’t work for me. The small town setting didn’t got much attention, beside the gossip loving waitress. It just fell a bit flat for me. Overall I enjoyed this book, but the first 50% was more towards the 4 star, with the second half towards the 2 star. So all in all, it was just okay, with some nice elements and some I could’ve done without. I don’t think I’ll be continuing this series.

Do you like romance books that are different from the norm? What’s the most original romance book you read?