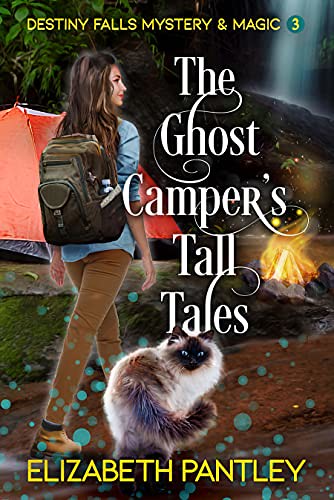 Blurb:
A magic mirror. An enchanted world. A mysterious story-telling ghost. A hilarious, perpetually annoyed witch. A smart, sassy cat. A mystery of finding a dead body . . . of someone who was already dead. Visit Destiny Falls and escape to a great time.

A mysterious old man keeps popping up to tell Hayden a series of tall tales. Who is he? And is he actually glowing? Are his stories fiction, or is he telling her the history of her family, the enchanted islands, and the witch? And why did a dead body show up . . . of someone who was already dead? Can Hayden and her quirky sidekick, Latifa unscramble this mystery?

Hayden’s adventures in the magical world of Destiny Falls continue in this gripping story that answers your questions about the mysterious world she entered through a mirror in book one, Falling into Magic. We learn more about her missing mother, whose story begins in book two, The Disappearance of Emily.

The Ghost Camper’s Tall Tales is the third book in the Destiny Falls series. It’s always fun returning to this unique world filled with magic. The magic in this series is quite unique with a house that changes based on the inhabitants needs and a family that is tied to the island and then a ghost who sort of lives in another realm. It’s fun spending time in this world.

This books mystery ties in closely with the previous books, which is nice. This series has quite a lot of continuity and is best read in order. The murder had an unique set up as they find the body of someone they thought was already dead. The mystery progresses slowly with the main character finding out some more information about the dead person and schemes he was involved in, but the actual piece of information to solve the mystery was provided by someone else as she couldn’t have known that.

Besides the mystery there are plenty of other plot lines going on. Like the letter Hayden receives that’s supposed to be from her mom, there’s a whole part of the plot that deals with that and there are some interesting developments. Then there’s a bit of romance as Hayden and Han grow closer. And the ghost ofcourse who tells Hayden stories every time he appears. I did manage to predict two plot twists as they seemed kinda obvious, but I am excited to see how these reveals impact the next book. There’s still plenty that isn’t known yet and remains a mystery.

It was fun to spend some time with the familiar characters and in in this magical world. There is a new fun character in the form of Bear, as well as plenty of more from the characters we already know. I liked how Hayden is learning sign language in this one. Another thing I liked is how smart and careful everyone is, they might be a bit over protective at times, but at least they’re not running into dangerous situations they could’ve prevented. It was nice to see.

To summarize: This was another great read in this series. I enjoy spending time in the magical world of Destiny Falls. There’s another murder mystery as they find the body of someone who was supposed to be dead already, which was quite the unique setup for a mystery. There are plenty of other plot lines going on and I liked seeing how everything progresses. There are some twists and turns, some of which I predicted and I look forward to seeing how some of these reveals impact the plot going forward. I enjoyed my time reading this book and spending time with these characters. I look forward to the next one.