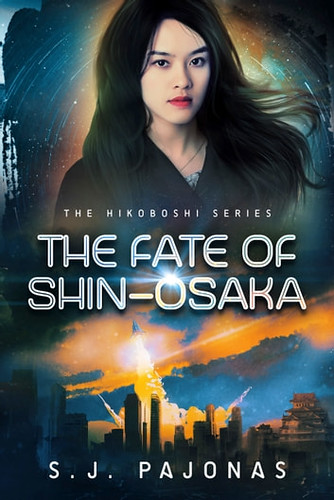 The Fate of Shin-Osaka (Hikoboshi #5)
by S.J. Pajonas

Blurb:
Life as an android isn’t all it’s cracked up to be.

After three months of living in an android body, slinging noodles, and fending off ornery men, Yumi’s done waiting to get her life back. But to do that, she’ll have to deal with her biggest rival, Gen, and the powerful Aoi Uma. Together, they’re mercilessly conquering the capital city, including the hospital where Yumi’s frozen body is stored. Yumi wants her eggs, and the only option to retrieve them is an undercover mission right under Gen’s nose.

Rescuing her frozen eggs is only the beginning. Her new body is waiting for her… and so is the love of her life, Rin. He barely trusts her as an android, and he’s slipping away. If she can stop Gen and Aoi Uma from stuffing humans into androids, she can transfer to her new body and win back Rin. Easier said than done when Gen is on her tail at every turn.

With the help of an expert team of journalists, assassins, and hackers, Yumi pushes forward with a risky strategy to take down Gen and Aoi Uma and end their reign of terror. Will Yumi end the siege of Shin-Osaka before the city is destroyed? And will Rin eventually welcome her back in her new body? This plan is dangerous at best and devastating at worst, and Yumi only has one life left.

The Fate of Shin-Osaka is the fifth and final book of the Hikoboshi space opera romance series. If you like unforgettable characters, pulse-pounding action, and tender romance, then you’ll fall for S. J. Pajonas’s intense science fiction saga.

Note: THIS SERIES MUST BE READ IN ORDER. It is a true series and plot elements carry through every book, from beginning to end. You will miss too much by reading this series out of order or skipping around. This series contains a slow-burn romance, profanity, and sexual situations.

The Fate of Shin-Osaka was one of my most anticipated books of this year. I love this series and was eager to see how this book continues this story after the big twist at the end of book 4 and then how it wraps up the whole plot. I felt like this book had so much ground to cover and there was so much that still needed to happen, but it managed it all. The Fate of Shin-Osaka was a satisfying conclusion to the series, wrapping up all the ongoing threads and ending with an awesome uplifting epilogue.

I had a hard time putting this book down as it’s filled with action, missions and plenty of things going on. There are plans for the future of the planet and for Yumi herself. There’s so much going on, but it never feels like too much. I like how Yumi switches from one mission to the next and the book feels fast paced and exciting as she and her allies fight for the future of the planet. I liked seeing them figure out the way forward and how to get there and how to stop the current corrupt corporation in power that’s making a mess of everything. I liked how everyone works together and it’s really a team effort.

Another thing I really liked about this book is the insight we get into the androids. Now that Yumi is an android we really get to see how they work. And I found it fascinating to see how the androids functioned and also how human they could be and also what was missing. The way it becomes clear this is a superior option in some terms, but that it lacks a certain humanity. I liked seeing the mix of human instinct and emotions and how that functioned in an android body. The androids are so capable, but it was also clear Yumi missed having a real body and that this was no good substitute. I thought it all was very interesting to read about and I also liked how it all gets resolved at the end.

This last book is quite story driven and filled with dangerous missions, it’s really the story of how Yumi and her friends fight for a better future. Luckily there is still enough about Yumi herself as well, although this book is another hard one for her I felt like it all pays off in the end. The epilogue is awesome, although I wish there was more epilogue as I want to see more of her future and how it all plays out.

Yumi really has her struggles in this book, but they are different than in earlier books and I felt like it added something to her character and another dimension to her personality. The only thing I really missed in this book is the romance, Rin keeps his distance and while he’s there in a lot of missions luckily so we get to see enough of him, I missed the closeness they shared. I liked seeing that slowly get back and I would’ve liked to see more of his struggle and thoughts about the whole thing. Luckily the ending is great romance wise and I liked how it wrapped things up for them.

To summarize: This was a amazing ending to this series! The Fate of Shin-Osaka was one of my most anticipated releases of this year and it certainly delivered. I had a hard time putting this book down as I wanted to keep reading and see how everything played out. I really liked following Yumi and her allies as they fight for a better future for this planet and seeing how everything pans out. There is plenty of action and dangerous missions as well as figuring out how to move forward and what to offer the citizens of this planet for a better future. I really liked learning more about the androids and how they work and it was interesting to learn about how alike humans they can be, but also how they differ. I felt like I really grew to understand why Yumi believes it is not the way forward. I felt like this book really gave an in depth look at the whole topic of humanity and artificial bodies and it was really interesting to read about. I liked seeing a new side of Yumi and how she handled everything in this book. This book was a bit low on the romance, but that made sense. The ending was satisfying and uplifting and I loved how it wrapped up this story.

6 responses to “Review: The Fate of Shin-Osaka by S.J. Pajonas”