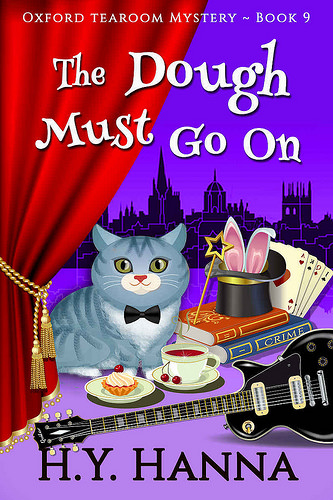 The Dough Must Go On (Oxford Tearoom Mysteries #9)
by H.Y. Hanna

Blurb:
Showbiz comes to Oxford in the form of Britain’s hottest new talent show, and tearoom owner Gemma Rose gets a peek behind-the-scenes when she’s asked to cater for the event. But with the Old Biddies, entering the contest as England’s first “granny band”, and her little tabby, Muesli, stealing the limelight, Gemma soon ends up with more than she bargained for… and that’s before she comes across a frozen dead body!

Now, she’s on the trail of a murderer, with four nosy old ladies giving her a helping hand, while also dealing with her embarrassing mother, her workaholic boyfriend–and even a mouse invader at her tearoom!

With things heating up in the contest and so many suspects in the running, can Gemma catch the killer before the curtain falls?
(* Dark Chocolate & Orange Scones recipe at the end of the story)

I was happy to return to oxford, Gemma and her tearoom in this latest release in the Oxford Tearoom Mysteries. There was a good mystery, new side characters we get to meet, a talent show and Gemma getting involved in it all. There are also some funny scenes with the Old Biddies, Gemma’s mom, Muesli and Gemma’s friends Cassie and Seth.

This book centers around a talent show where Gemma does the catering and then gets involved in a murder mystery when she discovers the dead body of one of the contestants. The talent shows was a different topic again for this series and I liked how we got a glimpse of the show and the colorful characters involved, many of whom were suspects. I had a clear suspect form the start and while I didn’t guess right, there was a reveal involving the one I suspected. I liked that I guessed wrong and was thinking in a totally different direction, but at the same time I thought it would’ve been a bit difficult to guess. I like how with the mysteries in this series you are able to figure out with the clues who the murdered is and I thought in this book there were only a few clues and not very clear or solid ones at that, which would make it hard to guess right.

It is great how many red herrings there were and even tough I was pretty sure I knew who had done it, I was guessing at a few times and thought another character or two did sound as a plausible suspect as well. There are a bunch of reveals, connections and past events that get revealed along the course of the mystery and it’s fun how everyone seems to be hiding something, but only one of them is the actual murderer.

There were a few scenes that were a bit too silly for my taste and a few unrealistic ones that I didn’t really care for, like the one with the mouse. But mostly I had a fun reading this one. The familiar characters we all see back, Devlin, Cassie, Seth, the Old Biddies and Gemma’s mom all play a role again. I also liked the new side characters and how not everyone is what they seem and there were some surprising twists along the way.

Gemma lands in some tricky situations again in this book. I liked how she was still shocked when finding the body even tough she has found her fair share of them already. I did flinch at a situation she gets into and I did actually agree with the person who got a bit upset with her. It wouldn’t be as interesting if she had just gone ahead and asked that person, but at the same time it also didn’t feel right what she did. I liked how Gemma stood up to the person who ran the show and wasn’t afraid to show her opinion.

To summarize: another solid mystery in this series. I had a clear suspect from the start, but it turned out I guessed wrong, although there was something that got revealed about the person I suspected. There are a bunch of red herrings, reveals and secrets that come to light. I did think it would’ve been hard to guess to culprit, but I did like that I guessed wrong after being so sure about my guess. I liked seeing how Gemma got involved in this mystery and landed in some tricky situation again. And it was fun seeing all the familiar characters again as well as getting to know some new side characters. There were a few scenes I didn’t really care for a few unrealistic things, but overall this was a great read. This was a solid mystery and I am looking forward to the next one!

What’s the last mystery were you guessed the murderer wrong?

6 responses to “Review: The Dough Must Go On by H.Y. Hanna”