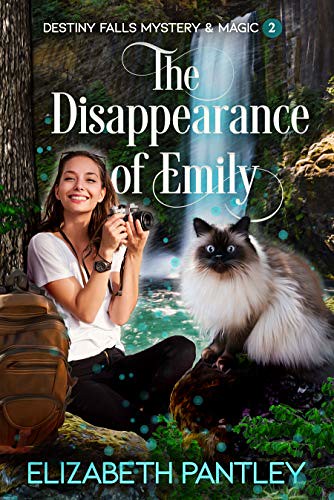 Blurb:
Hayden fell through a mirror and was thrust into an alternate, magical place. Destiny Falls is home to a family she never knew she had. The town is enchanted and charming, but something is amiss. Then someone turns up dead, and there are too many other suspicious episodes to call them coincidences. All signs point to the mysterious disappearance of her mother – way back when Hayden was just two days old. Can she identify and eliminate the threat before another person in her life is stolen away?

I really enjoyed my stay at the town of Destiny Falls in book 1 and was eager to return for another visit. The Disappearance of Emily brings a new mystery as well as more of the world and characters we got to meet in book 1 and some new faces as well. I like the unique feel of this series, it’s a bit of a mix of portal fantasy with a (paranormal) cozy mystery element and it works quite well. I like the type of magic here, which isn’t as much magic the characters use, but more a magic of the place, with things ever changing.

I enjoy spending time in this magical world, it’s such an unique place with how locations can be closer or farther away and things can appear when you need them. The library and local café often look different and the town seems to almost have a will and personality of it’s own. Then there’s the magical house with ever changing gardens, bookcases that move locations, a bench that moves and new rooms and garages pop up depending on the need of the people inhabiting it. It’s fun to read about it.

While I enjoyed this book I felt the mystery plot line wasn’t as solid as in book 1. At times it felt a bit jumbled. From the title I had expected the mystery to focus on Emily’s disappearance. Emily is the main character’s mom who disappeared when she was little. Unfortunately the book doesn’t really focus on this, although there is some development on this regard it isn’t because of anything the main character does.

The main mystery centers around a person who turns up death. Hayden investigates as she’s the only one who knows a vital clue. I was a bit annoyed at times how no one would tell her anything about two of the things she’s investigating, one of these seemed like such a normal part of life in Destiny Falls that I didn’t get why no one would tell her more. It felt a bit forced with how now she had to research it herself. I didn’t really get why Hayden was so obsessed with figuring it out as it didn’t seem as important/ relevant for the mystery. It does make sense given a reveal at the end, but I felt that during the book it didn’t feel as natural how she focused on this.

There is another storyline going on with a witch who seemed to be behind some things in book 1 and again here, but we don’t really find out much more about her. I think this might be something we only find out about later in the series. I didn’t get some of the movie and actor references in the book.

While the mystery wasn’t as interesting I did enjoy some of the developments in Hayden’s life. There’s a new task she gets that seem to fit her well. She also struggles with some homesickness and I liked how that got resolved. It’s great to see her fit in so well with her new family, although at times it seemed a bit overdone, everyone is one big happy family and they don’t have any family troubles at all. I liked seeing her relationship with her dad slowly develop a bit. There is a big group of characters, which means that not everyone gets as much page time at times, but I like how different each character is so you can remember who is who. There are some great characters, familiar ones and some new ones we meet as well. There’s even a kitten named Lola.

To summarize: I enjoyed returning to the magical town of Destiny Falls. I like the unique type of magic with a house that changes, stores that have a different interior every time and items appearing when you need them. I like seeing how Hayden is building her new life here in Destiny Falls. There are some interesting developments in her life and connections she builds with other side characters. At times it does feel a bit heavy on the daily life parts especially as the mystery is a bit slow to start up and for a long time doesn’t really progress. No big reveals or developments of the mystery take place until the end of the book and even then it feels mostly because of the murderer being stupid. With only a few suspects and not many twists or development sin the mystery it didn’t grip me as much. There are also some mystery related mysteries that jumble the plot a bit and taking Hayden’s focus in investigating those. There is an interesting reveal at the end that I am curious about.

2 responses to “Review: The Disappearance of Emily by Elizabeth Pantley”