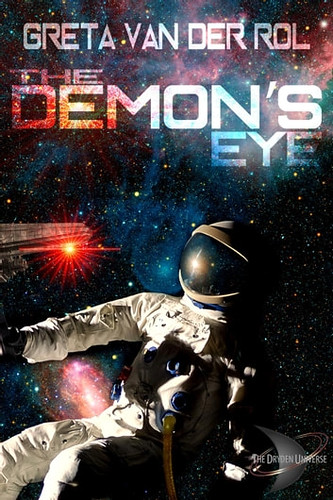 Blurb:
Krystina Merkos is reluctant to leave her home planet, but agrees it’s best that her father doesn’t have to concern himself with her safety while he fights a civil war. The journey on an Imperial warship becomes much more palatable when she discovers that Ben Paulsen, an old flame from her high school days, is a senior officer on the ship.

But it’s not all plain sailing. The captain wants to seduce her, Ben’s trying to keep his distance – and pirates want to sell her to the murderous sect waging war on her father.

When the frigate is attacked by a pirate fleet intent on capturing Krys, she faces impossible choices. If she hands herself over to the pirates, she will die a painful death. If she doesn’t, everyone will die.

Unless she and Ben can contrive a way out for them all.

After finishing A Matter of Trust by Greta van der Rol I dived right into the next book in the box set and started The Demon’s Eye. The Demon’s Eye is a pretty short read, but I thought the author handled the short format really well. There’s a clear plot and progression with a start, middle and end. It all gets wrapped up satisfactory at the end with a bit of a reveal and also gets a happy ending for the romance.

The plot is about Krys who has to leave her planet so she can’t be used as leverage for her father as he fights a civil war. The book starts with Krys already on a spaceship away from her home planet. There she meets her old flame Ben, while trying to avoid the unwanted advances of the captain. She thinks she’s safe away from her home planet, but her father’s enemies catch up with them. She has to make a difficult decision about how to handle the situation and she gets into more danger.

I liked Krys, the way she was willing to get off her home planet to help her father out. I also liked her connection with Ben, the way they went their separate ways with no hard feelings and now run into one another again and grow closer again. Ben seemed like a nice guy too and I liked the way he cared about Krys and came to help her. He seemed like a capable officer too.

I would’ve liked to see a bit more of their romance, but with the short length and plot there isn’t room for that. I think Greta van de Roll pulled off the shorter length story really well and it felt like a satisfying short read with plenty going on and a nice romance as well.

To summarize: This was a fast paced exciting story about Krys how leaves her home planet on a space ship to avoid being used as leverage for her father in his civil war, but their enemies catch up with them. There is a nice twist/ reveal at the end and I thought it was a satisfying short read with the way the plot unfolded and got nicely wrapped up. I liked Krys and Ben and they seemed to make a good couple. I would’ve liked to see a bit more of their romance as I liked them.