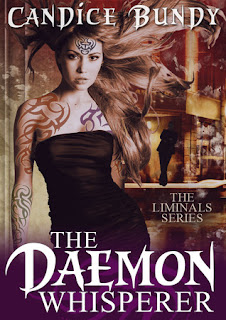 Meriwether Storm discovered the grisly remains of her parents when she was only fourteen—the result of a failed daemon summoning. Meri immediately swore vengeance on the daemon who’d killed her parents, but there was only one problem: she had no idea which one had committed the atrocity. Before their untimely deaths, her parents trained her intensively in the arts, which Meri used to follow in their footsteps, ever seeking the daemon’s name. Now, despite her years of searching, she’s no closer to the truth and her time is running out.

When a mysterious daemon named Azimuth offers Meri a deadly summoning in exchange for information about her parents’ murderer, she takes it immediately and without intimidation. What does worry her is her attraction to Azimuth: when he touches Meri, her pulse races and she breathlessly awaits the feel of his lips upon her skin. Meri knows she should keep him at arm’s length, but her traitorous thoughts obsess over him night and day.

Blinded by her desperation for the truth and her desire for Azimuth, Meri places her trust in the creatures who are her sworn enemy, jeopardizing her need for vengeance. After Meri discovers there’s more to the deal than the daemon cabal first promised, can she accept all they have to offer?

When retribution is the only thing that drives you, how much are you willing to sacrifice before you lose yourself to the cause?

The Liminals series is set in a future dystopian Front-Range Colorado filled with daemons, god-touched, and other not quite human creatures. Liminal beings stand at the crossroads between our world and alternate dimensions and have the ability to set things back to rights, if they so choose.

You can read first chapter at: http://candicebundy.com/the-liminals-series/vengeance-is-tricky/

My review:
This is a really good story, I liked the world Candice has created. The story was fast paced, but there were also some slower paced parts. The characters were nice, but overal I would’ve liked getting to know them better.

The story was really good and fast paced and I just wanted to keep reading to see what would hapen next. I really liked the strong beginning, it immediately pulled me into the story and I already thought that this would be an awesome book. The story really was the strong point of this book, with so much happening and after one thing was resolved there was already something else. The pacing was a bit off at times, with some things happening a bit too fast and other going a bit too slow. Also I thought the ending of the book was a bit strange and I think an earlier ending would’ve been better, there was a point were I thought the ending would be and then realized there were some 30-40 pages more. So after that point there was a new problem introduced about which we hear more in the next book. I think this introduction would’ve fit better at the start of the next book.

Something that bothered me was the focus on lust instead of romance. In this book lust took a more prominent role than romance and even though I got that they were attracted to each other I didn’t really feel their love, only later in the story there is more attention for the love aspect. Also I thought the sex scenes weren’t that interesting or well done, just my opinion.

The characters are likeable, although I did feel at times I didn’t really got to know them. I did like Meri and quite soon I got a good sense of who she was, but this wasn’t the case with the other characters. They seemed a bit flat and I would’ve liked to see more of their personalities, motives and personal goals. Also Meri is the kind of stubborn character who thinks she knows what is best and makes a few mistakes because of that, but she did stay really true to her character. Also some descisions in the first part of the book are taken a bit too fast and this wasn’t really believeable. Also it is mentioned often that meri is driven with vengeance, I didn’t really feel this.

The world building is something I wish was done more elaborate. Only when I reached the glossary at the end did I understand when this story actually took place and a bit of what the Corporations actually are. So not only did the deamon part of the story lacked world building, also the human part did. Also we do get to know a bit about Deamons, but I still felt like there should’ve been more. What is hell like, how is it created, how are the deamons created, how many different type of main deamons are there (like lust and hate), what are the powers deamon can possess and what are the politics in the deamon rhealm are just a few of the question I was left with. The idea behind the world is really interesting and original, I just wished there was more world building so the world really would come alive.

To conclude: a really enjoyable story and I kept reading, because I wanted to know what would happen next. The side characters lacked a bit depth, but I did like the main character and got a good sense of who she is. There was a bit too much focus on lust and sex instead of romance and love, although at the end of the story this did get better. Also I think the book would’ve been better with more world building. The story is really good and even though I had some issues with this book I still really enjoyed it.

4 responses to “Review: The Deamon Whisperer (The Liminals #1) by Candice Bundy”