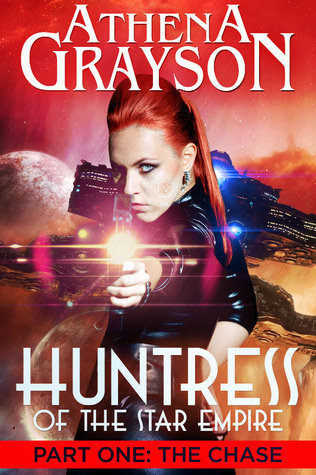 The Chase (Huntress of the Star Empire #1)
by Athena Grayson

Treska Sivekka is known as the Huntress — the Union’s most skilled bounty hunter. She knows no other life than capturing the treacherous psypaths whose mental abilities pose a security threat to the government she loves and serves. When she captures Micah Ariesis and claims the bounty on his head, her mission will be complete.

But every scumbag in the star system wants a piece of Micah, and she’s got to keep the last psypath out of their grubby claws–and out of her own mind–long enough to get him back to the Capitol. Even if his abilities might hold the key to unlocking her own missing past.

If you like fast-paced action, satisfying romantic tension, and breathtaking sci-fi worlds, then you’ll love this space opera with sizzle.

My Review:
Earlier this year I read my first book by this author Scandal, and ever since I have been convinced I had to start this series soon, especially as I already had the first two books. I am so glad I finally picked this one up. It’s different from Scandal, but because I had read Scandal I did know a bit what to expect from the author’s style. The Chase has action, sexy times, amazing world building and a bit of a mystery. I had a hard time putting it down once I started and I hope to dive not book 2 soon.

The Chase is told from multiple point of views. Mostly from Micah and Treska their point of views, but there are also some chapters of side characters like Xena, a prologue from another psypath’s pov, a chapter from the minister and a few more characters. I liked how this was handled with the main focus on the two main characters, but how we get to see what some other characters are up to as well and a get a feel for them. It also helped flesh out the world as we got to see more of it this way.

Micah was easy to like, he’s the last psypath. Psypaths have telepathic mind powers, which are pretty awesome even though I feel like we only seen a bit of what psypath’s are capable of. He seems like a likeable character and he goes on a dangerous mission,which he might not survive. He’s resourceful and it was interesting how he used seduction instead of fear against the huntress.

Treska is a bit hard to get to know at first and I think that’s intentional. She’s known as the huntress and hunts those who indulge in vices. She’s basically brainwashed by the government and fully believes everything she’s been thought. But at the same time Micah gets through her carefully constructed defenses and suddenly she’s having these dreams and thinking about things she shouldn’t think.

It will be interesting to see how this plot line continues as I have the feeling there’s way more to Treska’s character than we know right now. She doesn’t remember her early years and there’s a bit of mystery surrounding that and I think there’s a lot about her that we’ll discover in later books and I can’t wait to get to know her better.

There is a hint of a possible romance, although at this point calling it a romance is a bit of an overstatement. It’s mostly lust and attraction what’s going on in this book, but given that these two are enemies it works. It will be fun to see these two grow closer. There are also some hot sex scenes in this book, they are quite well written. And it nicely fit the story.

The world in The Chase is a bit of a dystopian galaxy. After a brutal attack by people they call the marauders there has been a drastic change in the galaxy, now vices are forbidden and vice hunters hunt those who indulge in vices. In The Chase we get a bit of a feel for how this event impacted the galaxy and how everything changed. Micah is the last psypath as all others are killed. The Hathori, from what I understand are a race who worship the pleasure goddess are confined to their planet. Basically lots of bad things happen in the hope of keeping this part of the galaxy safe from the Marauders. In this book we get a glimpse of how this world is now and what the government does to keep their people compliant, it’s both depressing and interesting to read about.

I also liked how creative the author is with her aliens. Besides psypath’s who have telepathic abilities, we meet a multitude of aliens. Lizard like folk, aliens with wings, aliens with bright pink skin and more. And even hints of the different cultures or why for example some aliens have sharp teeth because of what they ate on their home world. It all seemed very well thought out and I just want to know more about this world and the aliens that live there.

To summarize: The Chase was a great read filled with a great story, some action, some well written sex scenes, amazing world building and great characters. I had a hard time putting this book down after I started reading and I immediately got sucked into the story. At the start it feels a bit like you’re dropped in the middle of a world you know nothing about, but slowly the reader learns more about the world. The world building was done really well and the world really came alive. I quickly liked Micah, but Treska is a bit more difficult to like, which makes sense because of who she is. I can’t wait to see how they both will develop over the course of the series and I am so curious what happened in Treska’s past. There’s a hint of possible romance between these two, but for now they are enemies with some mutual attraction. There are also parts form other point of views and this helped get a better feel for the world and the characters in it. All in all this was a great read and I hope to five into book 2 as soon as possible.

Get The Chase for free if you join the author’s newsletter here!

10 responses to “Review: The Chase by Athena Grayson”