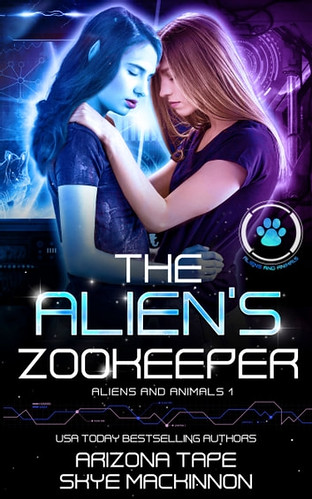 Blurb:
The stars gave her a mate… and a rhino.
Tilly doesn’t believe in aliens. At least, she didn’t, until she gets abducted along with half the animals of her zoo. When you and your rhino are stuck in a cage on a spaceship, it’s hard not to believe. One of them, an elf-eared female, seems ready to help her find a way back to Earth, but is that really what Tilly wants?

Bavalla’s messed up big time. She wasn’t supposed to abduct a sentient being, but now that she’s face to face with a female who’s not only intelligent but also very attractive, she has to figure out what to do. Telling the Captain would result in severe punishment, but how do you hide a human who’s very intent on saving not just herself, but all her animals as well?

A fast-paced f/f romance with a strong human woman and a swoon-worthy alien female willing to give up everything for her mate. Part of the Aliens and Animals series.

I was in the mood for a lighthearted and fun read and on a whim decided to read this book that I bought a while ago. I am so glad I did as it was exactly the type of book I was in the mood for. I had so much fun reading this book and bought the next two books before I even finished this one.

The Alien’s Zookeeper is a fast paced ff romance set in space. The plot is a bit of a twist on the alien abduction trope. Alien Bavalla is in control of the beam that abducts some zoo animals from Earth so her captain can sell the animals to sell to the highest bidder, but she accidentally beams up a human as well. Tilly is a human who is very dedicated to the animals she cares for at the zoo she works at. When she gets beamed up alongside her animals she’s determined to save herself and the animals.

This book starts off right in the action when Tilly gets beamed up and the pace keeps going steadily with something happening to further the plot or romance in every scene. Bavalla and Tilly quickly grow closer and end up working together to save Tilly and her animals. I liked seeing their romance develop and while things developed quickly it was clear their feelings for each other ran deep and I could totally feel their romance. I thought they made for a great couple and I liked how open they both where about learning of the other and accepting behaviors and habits from the others culture. I liked reading about them.

I also liked how the animals play an important role in the story and how dedicated Tilly was to saving them. I liked how Tilly’s reaction to being abducted felt genuine, she totally has a panic moment, but I also liked how she quickly accepted she got abducted and then focused on making sure she and her animals were safe. I liked how she quickly agreed to Valla’s plan for the animals and how they fell in love along the way. I liked seeing Tilly though Valla’s eyes and how alien some things looked to her, while through Tilly’s eyes Valla is the alien. I thought the story was well written and it kept my attention throughout. I just wanted to keep reading as I was having so much fun with this story.

I was pleasantly surprised to find out there was quite some world building in this book. I liked seeing Tilly and Valla find out the differences between their species and there are some fun scenes where they realize things work differently on Earth than on Kyven. As well as the differences between their species, customs, technology and more. We get to hear a bit about alien animals as well as see some of the technology that the aliens have. I thought it all added to the story and enjoyed learning more about the Kyven. There is also the whole mating ceremony thing later in the book which was fun to read about and see how it all worked. It was quite the romantic scene.

To summarize: This was such a fun read. It’s a fast paced and sweet ff romance story with plenty of animals as well. I thought the set up with a twist on the alien abduction trope was a fun and worked well here. I liked how we learn more about the alien species Kyven and how different they are from humans. There is plenty of world building to give a good feel for the Kyven, their customs, their technology and more. While the romance progressed quickly I felt the romance and was eager to see how they would make things work and save the animals. I liked how the romance was low on drama. I liked seeing how the plot played out and how Valla and Tilly got their happy ending. The ending has a set up for the next book and I am looking forward to reading that one!

6 responses to “Review: The Alien’s Zookeeper by Arizona Tape and Skye MacKinnon”