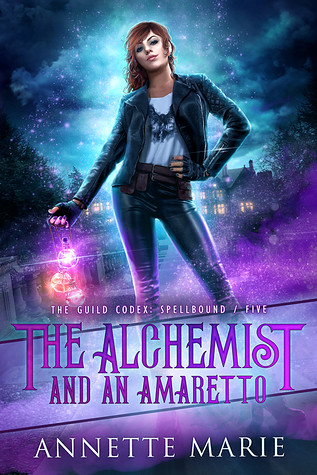 The Alchemist and an Amaretto (The Guild Codex: Spellbound #5)
by Annette Marie

Blurb:
As a guild bartender, I can handle pretty much anything—mages, sorcerers, witches, the occasional demon. But show me anything family-related and I’d rather run for the hills. It doesn’t even have to be my family.

So I have no idea why I thought spending the holidays with Aaron’s mom and pop was a good idea.

Meeting his famous parents is already terrifying enough, but I’ve got a bigger problem. Students of his family’s renowned mage academy are being attacked on the grounds—and somehow no one has seen a single assailant? Unexplained tracks litter the nearby woods, rumors of forbidden alchemy are circulating the campus…and Ezra has been acting strangely since we arrived.

Something deadly is brewing in the shadow of Sinclair Academy, and the longer we take to uncover it, the more dangerous it becomes. But no matter the risk, we’ll protect the students.

And Aaron’s parents too, I suppose. If we have to.

I’ve been enjoying this series so far and once I received my copy of this book I quickly jumped into this story. At first I wasn’t quite sure what the problem of this book would be as it starts off with everything going well, but slowly it becomes clear what the characters are dealing with in this book. And it was a gripping adventure from start to finish. It also was an important book in terms of the characters and had some well done reveals and twists.

After a short few scenes back in their home town, Tori, Sin and the three mages leave for Sinclair Academy where they’ll be spending Christmas with Aaron’s parents. The Sinclair Academy is quite famous and so are Aaron’s parents. The different setting worked for this book, it was a nice change of setting, but at the same time I missed the guild dynamics and bar tending scenes a bit. It did have as added benefit that the focus was much more on Tori, Sin and the three mages as those are the only familiar characters.

It’s an important book for getting to know more about the characters. Seeing Aaron interact with his parents and how he is at the academy, gives more insight in his character and also his friendship with Kai. It becomes obvious how Kai can ground Aaron and we see Aaron’s more elitist and arrogant side peek at out times and how he struggles to be the best version of himself. We also find out more about why Aaron didn’t join his parents guild. There are also some great scenes of Tori and Ezra. I like seeing how they interact after what happened in the last book and there is still the possibility of romance here. There is another big reveal that hits at the end of the book.

This was another great read in this series. I enjoyed following Tori along, seeing the character interactions and also that little hint of potential romance. There is plenty of action and I love seeing how Tori fits in the world of the mythic even though she isn’t a mythic herself and how she slowly grows more effective in combat as well. In fact she makes some big advancements in her battle skills in this book. With her potions, artifacts and the training she’s receiving. I like how she doesn’t become super good instantly, but you see her gradual increase throughout the series.

The storyline in this book was interesting as well with the strange happenings around the academy and how slowly things come together. There was a nice twist at the end which I figured out at about the same time the characters did. The title for this book is very fitting too and the cover fits the story perfectly. It’s fun how each adventure gets wrapped up in a book, but there are continuing storylines as well.

There is still more we learn about this whole world with each book. We get a glimpse of the mythic world a bit more with the academy and we hear about various other guilds and get to see more of members of other guilds. There is also some paranormal creatures we see more of in this book as well as more about alchemy with Sin being pretty present here and a famous alchemist in a town close by who plays a role in this book.

This is the first book after the spin-off Demonized started and I was excited to see how these two series would interact, but as I mentioned before the characters aren’t at the guild a lot in this book and well Robin from the other series is at the guild. So except for one scene in the book they actually don’t interact. It was fun to have that one scene with both main characters in the same room and to see what Tori thinks of Robin. With something that happens later in the book I have a guess of how the two series might interact, but guess we’ll see how that goes in future books.

To summarize: Another solid read. The main trouble of this book takes a bit to get started, but it was quite interesting. The pacing is done well and the new setting in this book worked well. There’s quite some focus on the characters and I feel like this book really deepened what we know of some characters. There are some reveals and twists in this book as well and I am really curious how the ongoing storylines will play out. I liked getting more insight in Kai and Aaron’s friendship in this book. There’s also a less likable side of Aaron we see in this book and we get a better understanding of some of the choices he made and his personality gets rounded out more due to what we learn. I liked seeing Tori slowly become more capable in combat and how this is a gradual increase throughout the series. There is more we learn about the world, a paranormal creature we see more of as well as more about alchemists. All in all this was another great read and I am already looking forward to the next book.

8 responses to “Review: The Alchemist and an Amaretto by Annette Marie”