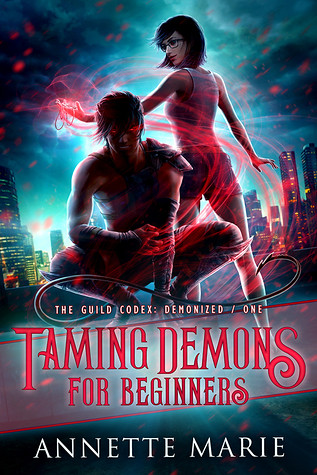 Blurb:
Rule one: Don’t look at the demon.

When I arrived at my uncle’s house, I expected my relatives to be like me—outcast sorcerers who don’t practice magic. I was right about the sorcery, but wrong about everything else.

My uncle chose a far deadlier power. He calls creatures of darkness into our world, binds them into service contracts, and sells them to the highest bidder. And I’m supposed to act like I don’t know how illegal and dangerous it is.

I was quite excited and curious when the author announced this spin-off series from the Guild Codex: Spellbound series, but also a bit afraid that I wouldn’t enjoy it as much as the Spellbound series. I started this book quickly after I received my copy, excited to see what it would be like. This is another great read by Annette Marie. Filled with action, demons, magic and a likable main character. I enjoyed it just as much, maybe even more than the Spellbound series. Both are great series so far.

I wasn’t quite sure what to expect from this spin-off series and I am still not 100% sure how these two series will continue and intertwine. But I can say this one is absolutely worth the read, whether you already read the Spellbound series or not. While both series take place in the same universe and there is some overlap, but this also felt like completely it’s own story.

At the end of Demon Magic and a Martini the characters from that series meet Robin, but there isn’t a lot of information about her yet. This book tells Robin’s part of the story and ends at the same place as Demon Magic and a Martini. Robin meets the characters from the other series, but so far there isn’t a lot of interaction yet besides two short scenes in which they see one another. There are parts of the story that take place around the same time, but show different events dealing with the same demon. It was quite well done. It’s not the same scenes from another point of view, but two stories touching one another and enhancing each other by telling more of the same story. I think they also can be read separately.

Taming Demons for Beginners is mostly about Robin and mostly focuses on demon magic. Robin has lost everything, her parents are dead and her uncle makes sure she isn’t seeing anything of her inheritance. Robin is the shy studious bookworm type, she doesn’t do well with confrontations or the spotlight, but she is determined to get her inheritance. So she’s staying at the uncle’s house until she can get her inheritance. While at her uncle’s house she meets a demon. And while she has avoided magic her whole life, she can’t help but be curious. What follows is an exciting story where Robin’s curiosity plunges her into the dangerous world of magic.

I liked Robin and her story. It’s so different from Tori’s story, although there are some similarities. Robin is this quiet bookworm type who was easy to relate to. I liked her burning curiosity and her need to learn more, but most of all I liked her empathy. She has heard demons are bad and evil, but still she’s curious to learn more. And she keeps an open mind. She is kind and determined and I liked seeing her get involved in the whole magical situation.

I also liked how the focus here was strongly on the demons and contractors, something we haven’t seen as much of in the other series. The story had a different vibe, it was mostly about Robin so far and the demon she finds. There is a bit about her uncle, her uncle’s contacts and the two step siblings. It was great to see Robin slowly get involved in the magical world and then one big event shakes up her whole careful life. There is a lot of dangerous stuff she gets involved in and she has to deal with some dangerous demons as well. And while we know where she ends up eventually, it still was exciting to see how she gets there.

Another thing I really liked about this book was the demon Robin meets. He was evil and dangerous, but most of all not human. I liked how the author displayed him as such, he had other values and morals. And while that might make him evil in the humans eyes, it also was very clear that it was normal for him. His bond or connection with Robin is very interesting, but where we get Robin’s point of view and know what she thinks, the demon’s thoughts still remain a mystery mostly. He’s a very interesting character and well written. I am looking forward to learning more about him in future books. I really liked seeing how the demon and Robin interact when they first meet and how over the course of the story that changes, but how parts also stay the same.

It was quite fun to see this familiar world from a different perspective. As I already was familiar with the magic system and different classes, it was easy to slip into this book and focus on the story. I can imagine that for those who start here it might be a bit harder to get a grip on the world besides the demon side of things. I liked seeing how Robin experiences the world and how different it was to Tori. I also liked how we get a better understanding of the events in Demon Magic and a Martini as this book answers some big questions we don’t get answered there.

To summarize: This book was just a lot of fun to read. With the fast pace, lots of action, magic and interesting characters it kept my attention from start to finish. I liked getting to know Robin, she is a quiet and studious girl who is both curious and kind. She was easy to like. The demon she meets is really interesting with how not human he is. It’s interesting learning more about him and the demon realm. I liked seeing how the demon and Robin interact and how their interactions change over the course of the story. It was fun to get more insight in some of the events from Demon Magic and a Martini as this book sort of takes place parallel to that one with how the events sort of get intertwined, but very little interaction between main groups of characters yet. I am excited to see how these series will progress as both series are great so far and I feel like reading both series will only enhance the experience. I am looking forward to the next books in these series!

2 Responses to “Review: Taming Demons for Beginners by Annette Marie”