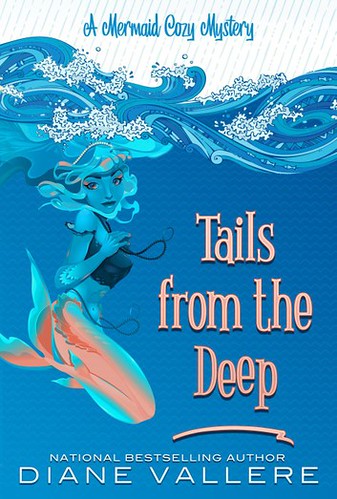 Tails from the Deep (Mermaid Mystery #1)
by Diane Vallere

One matriarch to keep them in line.

Yes, sunken treasure. Because this is the ocean, where pearls are common, crimes are not, and mysteries lurk behind every cluster of coral.

Welcome to Sirenia, the mermaid colony in unchartered waters!

Zoe wasn’t looking for trouble. As the middle daughter in a family of three mermaid sisters, she never gets the attention she deserves. She spends her days frolicking with sea creatures by the sunken battleship that sits at the edge of Sirenia, and her nights being lectured about danger. But when she finds a diver trapped in the kelp by the wreckage, she overcomes her shock to free him. The problem? The only available tool to cut him loose is the knife in the body on the ocean floor by his feet.

What happens when a mermaid saves dangerous stranger?

If you’re that mermaid, you might have to solve a mystery to save yourself.

Zoe learns the diver is a detective tasked with solving the dead man’s murder. Being in the unique position of finding evidence underwater, Zoe volunteers to help . . . until she finds a clue that links the body to her older sister. Now the only way to ensure the safety of her sister—and protect the mermaid colony she always dreamed of leaving behind—is to discover the dead man’s identity herself. Zoe is used to being invisible around the other mermaids, but what happens when her sleuthing for clues exposes herself to the humans who may be responsible for a murder? With the evidence hidden in the ocean floor, digging for clues could lead to an early grave . . . in Davy Jones’s Locker.

You’ll love splashing around in the virtual world of Sirenia, because mermaid mysteries are the perfect escapist fiction.

As soon as I heard the author was planning a mermaid cozy mystery series I knew I had to read it. It just sounded to unique and fun. And that’s exactly what this book was; a lot of fun. The mix between mystery elements and mermaid parts was well done and it gave an unique twist to the mystery or an extra dimension to the mermaid story depending on how you look at it. I enjoyed learning about the mermaid world and having a bit of mystery as well.

The mystery wasn’t as strong as in many cozies. Tails of the Deep is a pretty short read and the mystery gets resolved rather quickly. There aren’t many suspects or twists and I wasn’t surprised at the murderer. The resolution did feel rather sudden and a bit rushed and there wasn’t much of a wrap up where things were put in it’s place and explained. I was left with some questions and would’ve liked to see a bit more about how this got resolved and how everyone reacted to what happened. I liked seeing how Zoe got involved in this mystery and how she had this taste for adventure.

So while you might not want to read this one for the mystery, I would recommend it if you’re looking for a fun read. I enjoyed the underwater world Diane Vallere created in this book and following Zoe’s adventures. It was fun to see how different these three sisters are and I am looking forward to the stories of the other two sisters. I think I also enjoyed this extra as I was looking for a fun light hearted book and that’s exactly what this one was.

Zoe is the middle sister, she doesn’t have special privileges like her older sister or is the baby of the family like her younger sister. She longs for adventure, even tough that’s not the mermaid way. It was fun to see her explore a sunken skip and stumble upon a murder and how determine she is to figure out what happened. While she doesn’t hesitate to put herself in danger, she did some smart things as well and was pretty protective of her sisters.

The author did a great job showing what life underneath the ocean was like. The author gave a good feel for what their society and community was like and I liked how the mermaids could communicate by song and how the songs were part of the story. There also is a bit of how society views mermaids and how Zoe didn’t follow that image. I liked the idea of a treaty between humans and mermaids that protected the mermaids and it made a lot of sense. Then again there were also some parts that confused me a bit like how they can read underwater or how not everything floated away. But nevertheless the world had a lot of flavor and I could image what everything looked like even though I had some questions remaining. I also liked some of the unique touches like how they talked to all the sea creatures and the market.

To summarize: This is a fun mermaid themed read with a light mystery. This book was just a lot of fun to read. It is pretty short and the mystery feels a bit quick. The mystery wasn’t as complicated as in most cozies, but it did add an extra theme/ focus to the book. The resolution to the mystery felt a bit rushed though and I remained with some questions. I enjoyed getting a feel for how these mermaids lived underwater, their community and society and their rules. While some things didn’t quite make sense and I have some questions left, overall it was great to get a feel for this underwater society. There were some nice unique touches. I would recommend this is you’re looking for a fun mermaid read with a mystery as well.

6 responses to “Review: Tails From the Deep by Diane Vallere”