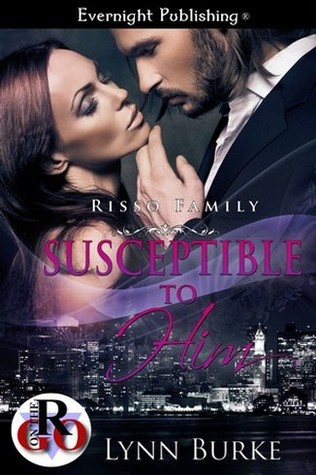 Susceptible to Him (Risso Family #1)
by Lynn Burke

Blurb:
Lia Risso walked in on her fiancé and three other women on Valentine’s Day. Two celibate years later, her roommate creates a profile for Lia on a dating website—without her knowledge—and sets up a date. On Valentine’s Day.

Ryan Walsh, a self-made millionaire and libertine, refuses to commit to any one woman. Tossed from foster home to foster home as a child, Ryan is on guard against becoming vulnerable ever again.

One dinner…one night of dancing and flirting with the attraction between them, puts both Lia and Ryan in danger of heart break.

They have a choice—open themselves to the possibility of hurt or walk away, never knowing what might have been.

My Review:
I won a copy of this book during a giveaway in a facebook party. I had heard of this author before, but wasn’t sure what to expect from her books. I only knew it was a romance book. This book is a novella, I easily read it in two sittings, so it’s pretty short. It was an enjoyable read, although due to the length it did feel like we don’t get to know the characters as much as I would’ve liked and there’s less time for the romance to developed. Nevertheless it was still a fun read, perfect for when you’re in the mood for a short hot romance book.

Susceptible to him follows Lia and Ryan. Lia has had a painful break-up two years ago and her best friend thinks it’s time she get’s over that and she sets up a date for Lia on valentine’s day with a guy she found on a website. Lia isn’t too pleased with her friend’s interference, but she still goes on the date. There she meets Ryan. Ryan is a millionaire with a bit of a sad past and doesn’t trust people easily, he’s a player and has sex with women, but not more than that until he meets Lia. They share a dinner, get to know each other a bit and their feelings and attraction quickly progress.

The character were okay, we get a bit of a feel for both character, who they are, where they work and what they like to do. It’s pretty limited due to this being a short story, but I liked that the author made an effort to put some personality in the characters. There also is a scene where we meet Lia her Italian family and as this series is called the Risso family, I am assuming her siblings are the next main characters. There are some hints of possible couples and main characters for the next books and I liked seeing a glimpse of their family. On Ryan’s side we hear from a few of his friends, but I felt like I got a better feel for Lia her character.

The romance builds up very quickly, they basically fall in love/lust over the course of dinner, but hey at least they had dinner first and tried to get to know each other. There are two sex scenes and a bit of drama, nothing too complicated, but it does throw a complication their way to overcome. The sex scenes didn’t really do it for me, it just felt a bit too soon and a bit cliché. And it rubbed me wrong how Ryan called his dick Old Boy. They did jump into things a bit quickly, but they were safe about it and used a condom. I did feel like the had a connection, I just wished there had been time for it to build more slowly.

To summarize: this was a fun short romance book. I liked we got a bit of a feel for the characters and they spent some time getting to know each other before jumping in bed together. Nevertheless it all felt a bit soon as this book is pretty short. I wasn’t a fan of the sex scenes and how Ryan called his dick Old Boy. I did like that we got to see a bit from Lia her family and possible main characters for the next books in this series. Overall this was a nice short story for if you are in the mood for a short hot romance book.

Which words or terms can rub you wrong in a romance book?

10 responses to “Review: Susceptible to Him by Lynn Burke”