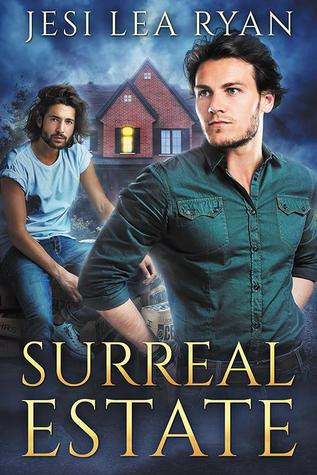 Blurb:
Sasha Michaels is a psychic with an affinity for houses. And he’s homeless. Go figure. After months of sleeping rough, he stumbles upon an abandoned house, and the lonely place beckons him inside. He’s finally safe . . . until someone comes blundering in to his hideaway.

House-flipper Nick Cooper lost everything in the recession. Desperate to revive his business, he turns to a loan shark to fund his comeback project: flipping an abandoned house full of potential. But it turns out the house has an unexpected occupant.

Nick and Sasha make a deal: Sasha can stay in exchange for helping with the renovation. To both of their surprise, the closer they get to the loan shark’s due date, the stronger their feelings for each other grow. Problem is, Nick isn’t the only one with feelings for Sasha, and now the house doesn’t want to let Sasha go.

The premise of this book caught my attention when I first heard of a it, a house flippers who falls in love with the squatter who lives in the new house he bought. And one of them is a house psychic, how cool is that? The house flipping theme and the psychic with a affinity for houses is what pulled me in. The house psychic thing also ended up being one of my favorite parts of this book.

Surreal Estate was a fun read, I liked the premise, the writing flowed well, the pacing was well done and there was a nice romance too. But for some reason it failed to fully pull me in. I enjoyed myself when reading it, but I wasn’t really eager to continue or find out what would happen next. There is just something about the book that prevented me form enjoying it as much as I would’ve liked and it’s hard to put my finger on what that is exactly. But it ended up being a good 3 star read, a good read, but failed to leave a lasting impression besides the fun theme.

Nick hasn’t had the best luck with his business and when he finds the house in question he sees an opportunity. But it seems everyone doubts his ability to pull it off, except for the squatter who he finds living in the house. Sasha believes in the house and in Nick’s vision. Nick makes a deal with Sasha and let’s him stay as long as he helps with renovating the house. Sasha is homeless and happy to finally find a safe place to stay when he finds an empty house. It gets even better when he meets Nick and can stay in the house in exchange for some work. Then there is the topic of Nick dealing with a loan shark who got him the money for the house and Sasha dealing with his drug addict mom and unsure housing and living situation.

I liked reading about the whole house flipping business and getting a bit of an idea of what is involved in this. I liked how the author gave the reader a feel for what’s involved, without delving too deep in the details. There is still enough room for the romance and other plot lines as well, which was great.

One of the things that didn’t work as well for me was how sometimes things lacked impact. There is a pretty traumatic (in my opinion) scene for Sasha that almost is forgotten the next day and only serves to further the romance. A scene with Nick were he realizes how creepy the loan shark is, that someone failed to have the impact I had hoped it would have. Nick discovers he is bi, but even that revelation comes and goes quite quickly and he easily goes with that. It just seemed to lack impact at times these events, on the other hand I did like how things weren’t dragged out or dramatized for the sake of the story.

I also didn’t really care about the loan shark plot line and the plot line surrounding Sasha’s mom. There was nothing wrong with them, but I don’t really care for the topics and have read some other books that dealt with similar topics. Having said that I did like how the plot line surrounding Sasha’s mom got wrapped up. And the ending of the book was great and sweet. I also manage to predict quite early on how the money situation got resolved, once a certain plot line pops up I thought it was a bit too clear that this was the solution to the problem. I did like how the book is low on the drama and the plot lines don’t get unnecessary dragged out. In fact things got resolved quite quickly, which was nice.

I liked Nick and Sasha well enough, I didn’t like them as much as I would’ve liked, but they both seemed like decent characters. I also liked how they both had their struggles and I felt for both of them and hoped they would get out of their difficult situations. Nick was compassionate and I liked how he offered Sasha the deal to stay in the house. I also liked how Sasha was willing to work hard and made the best out of a bad situation.

The romance was also nice enough, but just failed to fully get me invested. They were a good couple and worked nicely together. They both had their own problems to overcome and deal with, but also some things they had to resolve as a couple. Sasha shuts Nick out for a while and doesn’t communicate. I did like how Nick shows a bit of vulnerability there and worries he did something wrong, they all resolved in a mature manner too, which was nice. They made for a great couple, but I didn’t fully feel their chemistry. I also thought their romance progressed a bit weirdly at times, they seemed to make these big leaps and then stand still for a bit and then another leap.

To summarize: all in all I had fun reading this book, but something was missing to fully pull me in the story. It all was nice enough, but never got to the point of really good, which is a shame as I loved the premise. The house flipping theme was fun, the homelessness situation was handled well and there are some side plot lines going on too. I felt that some sort of big events failed to have the impact their could’ve had, but I did like how the book was low on drama. Things get resolved a bit too easily at times and I predicted the resolution to the money problem as soon as a certain plot line got introduced. I liked Sasha and Nick and thought they made for a good couple, but I didn’t fully feel their chemistry. Their romance also seemed to progress a bit slow at times and then suddenly take a leap forward. The house psychic thing was my favorite part of this book, I really liked how the author wrote about that and how Sasha could communicate with the houses in a way and each house had their own personality. All in all this was a nice contemporary romance book with a paranormal twist.

What’s the most unique type of psychic powers you read about?