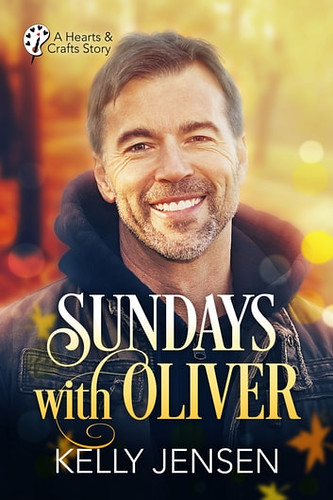 Oliver expected to miss his daughter when she left for college, but he’s surprised by the size of the hole she leaves. Or maybe he hadn’t expected to spend his days watching grass grow and making sad cookies. Or to lose his job. Meeting Nick—the uncle of his daughter’s roommate—is a bright spot in an otherwise gloomy forecast. Nick is focused, talented, and as beautiful as the dollhouses he builds. Being near him might bring light and purpose to Oliver’s life.

Nick expected to miss his niece when she left for college, but he’s still figuring out how to cope with her absence, when his brother reappears after twelve years, complicating the emotional puzzle. Then there’s Oliver, the sweet, calm, and competent man who looks at Nick like no one ever has. Spending Sundays in Oliver’s company is the balm he needs, though Nick is waiting for Oliver to decide their relationship is too much work.

But just as Nick begins to get comfortable, Oliver’s need to provide for all of the people he loves threatens to pull them apart. If their relationship is to survive, they will have to learn to let go. For Oliver, this means asking himself what he really wants, this time around. For Nick, it means letting himself grieve the people who can’t come back and love the people who always will.

I received a free copy of Sundays With Oliver from Gay Romance Reviews and voluntarily reviewed it.

I’ve been anticipating this book for a long time now and was so excited when I finally got my hands on my copy. Kelly Jensen is one of my favorite authors and this book was awesome. Sundays with Oliver made me smile, think and feel. It was such a real story as well as heartwarming and sweet. One of the best books I read in a long time.

This was such a relatable and real romance story. Oliver and Nick’s struggles both felt so real. From Nick struggles with what he calls being different and his fears that Oliver can’t deal with it. To how accepting Oliver was of Nick. To Oliver’s struggles with finding a new job. To Nick’s struggles with losses in his family and reconnecting with his brother. How they both had to deal with not having their daughter/ niece living at home anymore and the hole that left. And even with all that going on I thought it was a beautiful and uplifting book as well.

Besides all the struggles this book feels like a ray of warm light and of new beginnings. The way Oliver and Nick connect was beautiful and I absolutely loved seeing them together. Their connection felt so real and tangible and I just wanted to read more about them and see how they made it all work. I loved how accepting Oliver was of Nick. And I loved how Nick tried to make room for Oliver in his life. It was such a beautiful romantic story and I was rooting for them both. There are all these little gestures and scenes with so much feeling. Scenes that showed how much they cared about the other, there are so many great scenes in this book and I loved reading about these two.

Besides the two main characters the whole book is filled with great characters. I really liked Gray, who is Oliver’s best friend. And Cam who is Nick’s brother. I actually didn’t like him at first the way he invaded Nick’s space, but he really grew on me over the course of the book, the more we see of him the more I liked him and understood him. And I am so excited that both Gray and Cam get their own story. I also really liked Dani, Oliver’s daughter, and Emma, Nick’s niece. They both play an important role in this book and I liked reading about them. And I liked how food played a role in this story as well with how Oliver likes to cook, I liked reading about all the food. I also liked how Nick made dollhouses, that was so interesting to read about.

To summarize: I loved this book! Sundays with Oliver is such a beautiful and romantic read with realistic characters. I liked the set up of two empty nesters meeting and falling in love. I loved how likeable and real both Oliver and Nick felt. Seeing them fall in love was awesome and there are so many awesome scenes with them, so many touching ones. I really loved their romance and their connection was tangible. This book was filled with hope and love as well as realistic struggles these characters go through. There are also some great side characters who come to life too and I can’t wait for Gray and Can’s stories!