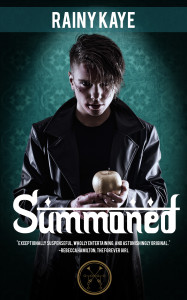 Twenty-three year old Dimitri has to do what he is told—literally. Controlled by a paranormal bond, he is forced to use his wits to fulfill unlimited deadly wishes made by multimillionaire Karl Walker.

Dimitri has no idea how his family line became trapped in the genie bond. He just knows resisting has never ended well. When he meets Syd—assertive, sexy, intelligent Syd—he becomes determined to make her his own. Except Karl has ensured Dimitri can’t tell anyone about the bond, and Syd isn’t the type to tolerate secrets.

Then Karl starts sending him away on back-to-back wishes. Unable to balance love and lies, Dimitri sets out to uncover Karl’s ultimate plan and put it to an end. But doing so forces him to confront the one wish he never saw coming—the wish that will destroy him.

Summoned is represented by Rossano Trentin of TZLA.

Find out more at http://www.summonedtheseries.com

Summoned sounded like an awesome and original story and I had high hopes for it, unfortunately it turned out to be a bit of a disapointment for me. Although it certainly had it’s good parts overal Summoned just wasn’t the book for me. I thought the pace was a bit slow and some part where a bit boring. Also the writing style didn’t really work for me, not sure why, but it just felt a bit off.

Summoned is told from the perspective of Dimitri, a Djinn who has to fullfill his master’s wishes. His master Karl usually only sends him on a wish mission once in the two months, but from the moment Dimitri is send to kidnap a little girl he suddenly get’s back-to-back wishes, just when he starts to fall in love with Syd. It all sounds very intriguing, but for me all the missions just felt boring, it was mission after missions and Dimitri often handles them quite clumsy. It just wasn’t interesting to read.

I knew there was something up with all these wishes, but there aren’t enough hints dropped to connect it al or even have predictions. Then there finally something happens and then I figured it all out before the main character did. I felt myself skipping or quick-reading some small parts. At 75% the actions starts, but I have to admit that even that action was boring. And then the last 5% was great, but it just came too late.

At first I thought Dimitri seemed like a great main character, he still seemed to care about people even though he had to kill or kidnap them. But after a while I just lost interest, Dimitri creates stories about the people he is forced to kill and kidnap so they seem like bad people, but it more felt like he just couldn’t deal with what he had to do. I felt sorry for Dimitri because he certainly got the bad end of the deal, he had to do horrible things and there was nothing he could do about it. Or maybe there was, but he wasn’t really looking for a way out.
Also I thought he handled most of the missions really clumsy. I have read a few books about assassins where the killings where written really well and smart. Now I understand Dimitri isn’t a real assassin, but I would’ve thought he had gotten some sort of training in these things. It’s just a bit weird how he didn’t come up with plans, but just rushed into a situation and see what happens. I do have to say all his actions stay true to his character, he always acts like I expect he would based on what we knew about him and I thought that was done really well.

I liked Syd, she was so random and was good for Dimitri in a weird way. The romance felt a bit off, there is a lot of sex and lust, but beside that there doesn’t seem much more. They just had sex a lot and only seemed to get together for the sex. After a while this changed and I started to really like Syd, but still there are hardly any getting-to-know-each-other scenes and I would’ve liked reading a few more of those.

There aren’t many side character really worth mentioning. Beside Syd, the most seen character is Sylvia and Karl and I hate them both. Sylvia is so terribly annoying I just wanted to skip every scene she was in. She has a perfect life and wants more and she wants everything. I couldn’t stand her at all. Karl is the stereotypical villain, he has a lot of power, enjoys making people suffer and does anything to stay in power. He was bad, but then we don’t learn a lot about him and he was just there being the evil guy.

One of my biggest issues with the book, beside the slow pace, was the world building. The author has this awesome and original idea and it just falls flat, because there is no world building to keep it all standing. I wanted to know more about the Djinn, how they came into existence, how the master bond worked, how the Djinn bond worked, which powers they had, if there where loophole sint the wished etc. But none of that is the focus of this book and while there is a little world building at the begin, it just wasn’t enough. The world didn’t came alive and I didn’t fully understand what the Djinn’s are and what they can do. And then at the end a lot of my questions are answered and there suddenly is world building, but it was just too late and I wished there had been more of that interwoven in the story.

To Conclude: Summoned is not a bad book, it’s based on a really original idea and I liked how consistent the author wrote Dimitri’s behavior. Sadly Summoned was just not the book for me, the writing style didn’t work for me, the pace felt slow and there where huge parts where nothing really seemed to happen (except build-up for things further in the book) and it just couldn’t keep my attention. Dimitri was a nice character, although he seemed a bit clumsy sometimes and not really planning things or thinking things through. I did like Syd though, she was a nice character. I also thought Dimitri and Syd where good together, but there was too much focus on the sex and not enough on the romance or getting to know each other. My biggest issues with this book was the lack of world building, the world just didn’t come alive. I really liked the last 5 % though, there was world building and things where resolved and it was a nice ending to the book.

You can add Summoned to your to-read list on Goodreads

You can also find Summoned on Booklikes and on Facebook.