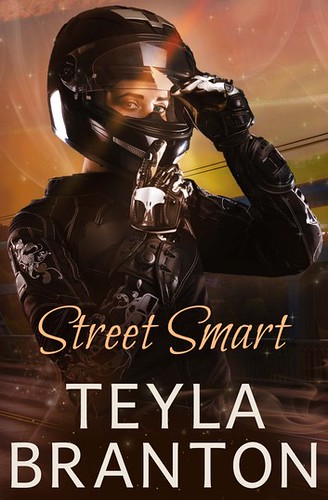 Blurb:
What secrets lurk behind the innocent smiles?

When a lady biker vanishes two days before her planned wedding anniversary ride, Autumn Rain dons her leather jacket and goes undercover to investigate. Police are sure the husband is responsible, but Autumn’s ability to read emotions and experiences imprinted on certain objects gives her a different take.

Meanwhile Autumn’s fiancé, homicide Detective Shannon Martin, is investigating a series of murders and also needs Autumn’s unusual talent. Soon Autumn is heading down a path no one else can see, where secrets and jealousies drive insanity, and where minutes mean the difference between life and death.

Join Autumn in a case that’s her most dangerous yet.

I really enjoy the Imprints series, when I first discovered the series I read all the books out by then and now that book 6 released it didn’t take me long to get around to reading it. It was great to return to Autumn’s world for another suspenseful read.

In Street Smart Autumn has to go undercover as a biker to figure out why a biker women got missing. There also multiple secrets she uncovers along the way and new characters she gets to meet. It was a well done mystery, with plenty of suspects being present from the start, but it being unclear who had done it. More and more clues come to light until finally the big reveal toward the end. I wasn’t surprised who the culprit was, but I was never fully sure either till the reveal. As there are always multiple suspects and unknowns, so it takes a long time to become clear whose behind it. The progression of the mystery was very well done and kept my attention.

I liked how we find out more about Sariah, the missing women. Through the imprints that Autumn reads there slowly forms a picture of who she was and what she cared about as well as which secrets she kept. I always find it interesting how in mysteries like these you can get to know the victim without ever meeting them. For a long time it stays uncertain whether Sariah is still alive or not, which only adds more tension and suspense to the storyline. I thought it was a solid mystery that kept me invested and I wanted to continue reading to find out more.

While the main focus is on the biker case, there are a few other plot lines going on as well. Tawnia is stressing out because her adoptive parents come for dinner. Then there is a small boy that comes in Autumn’s shop and she’s trying to find him after reading an imprint on a pen he left behind. Her fiancé Shannon is deep in a case involving multiple homicides and needs her help with his case as well. And it’s unclear whether these all stay separate or connect later on. It was great to see how each of these got resolved. I like how there were a few other things going on besides the main plot line as well.

As always it was a joy to read about these characters. After all these books you get to know them quite well and I like reading about them. I like seeing how Autumn and Shannon interact and how close they are and also how much they trust each other by now. Tawnia and Destiny again make multiple appearances. Jack takes a bit of a smaller role in these later books due to what happened, but he’s still present. And Cody is there for a bit as well again. Then there are some new biker characters Autumn meets as well as some other characters related to the case. There’s a PI she meets and I am curious what role he’ll play in future books.

One of my favorite things about this series is the way the paranormal aspect, namely Autumns ability to read imprints as well as a few other characters with paranormal powers is mixed so seamlessly in with the suspense element. It stays very down to earth with the way the imprints work, but the imprints are always a vital instrument to Autumn solving the case or uncovering clues. After the previous book in which she didn’t read as many imprints, it was great to have this book be chuck full of imprints again.

To summarize: Another great book in this series. I really enjoy this series and was happy to be back in Autumn’s world again and follow her while she solves another mystery. This disappearance had plenty plenty of suspects and very few clues at first. It was interesting to follow Autumn as she uncovers more clues and comes in contact with the possible suspects, I wasn’t surprised when the culprit was revealed, but I was never sure who it was either. It is quite the suspenseful read with how things play out and with the uncertainty of whether Sariah, the missing women, is still alive or not. There are some reveals, twists and secrets that come to light. There are some other side plot lines as well. And plenty of recurring as well as new characters to read about. I like seeing Autumn and Shannon together. And I am curious about the PI Autumn meets in this book. The paranormal and suspense elements are mixed well together and I like how the imprints are crucial in helping Autumn solve the case. This continues to be a great series and I am looking forward to the next book.