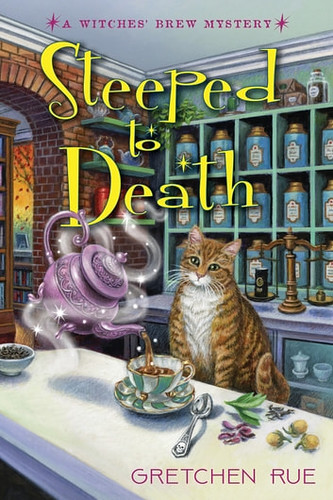 Blurb:
For fans of Laura Childs and Amanda Flowers, it’s teatime in Raven Creek—but a murder at the The Earl’s Study sets the stage for an intoxicating brew of small-town chicanery with a hint of the supernatural.

Phoebe Winchester’s beloved aunt Eudora has a taste for adventure—and a knack for making magical tea. It’s even rumored that she just might be a witch. So when Eudora passes away and leaves everything to her niece—her Victorian mansion, her bookshop/tea store, The Earl’s Study, and one very chubby orange cat named Bob—Phoebe gets more than she bargained for. And she knows she’s in deep when a dead man is found on the shop’s back step, apparently killed while trying to break in.

Two suspects immediately emerge among the townspeople of Raven Creek, Washington. There’s village busybody Dierdre Miller, who seems desperate to buy Eudora’s house, and handsome PI Rich, one of Phoebe’s childhood friends—but how well does she really know him after all these years apart?

Phoebe knows she should leave it to the professionals, but as she starts to dig into the underbelly of Raven Creek, she begins to uncover the truth about Eudora. What’s more, her aunt might not have been the only witch in the family, as Phoebe soon discovers she has unique and unexpected gifts of her own.

Now, it’s just a matter of putting her newfound power to the test and cast a spell that could catch a killer.

Steeped to Death caught my eye when I was browsing Netgalley with the cover and blurb. This sounded like such a fun read and I am glad I got a copy of it. Steeped to Death was a great start to this new series and I really enjoyed reading it! There is a great mystery, a cat, a small town and a hint of magic. The pacing and writing were well done and I got quickly sucked into the story eager to find out more.

In Steeped to Death main character Phoebe arrives in Raven Creek. Her beloved aunt Eudora has died and she Phoebe inherited her Victorian mansion as well as her bookstore/ tea shop. Phoebe is finding her way in this small town and almost right away seems committed to staying and running the store. I liked there wasn’t as much back and forth and uncertainty. Someone gets murdered while trying to break into the shop. Before she knows it Phoebe is surrounded by mysteries that she has to figure out.

I like how Phoebe got involved in the mystery, with how the dead guy was trying to break in. Phoebe is wondering what he was looking for. Another resident seems very interested in buying her house. Phoebe has to figure out what’s going on and I like how the mystery ties into the properties she has inherited. It felt realistic how she got involved and how most of mystery and investigation progressed. I also liked how she wasn’t afraid to call the police and share her findings. It was fun to figure things out alongside Phoebe and I thought there were some nice reveals along the way as Phoebe finds out more of what’s going on. The conclusion to the murder mystery wasn’t too surprising and made sense, but I have to admit I hadn’t expected it. The revelations Phoebe discovers along the way were the most interesting part for me, as she slowly begins to understand more of her aunt and what she left to her.

I liked the story and the way it grabbed my attention. The book was well written and I thought the pacing was done well. The mystery is intertwined with Phoebe finding her way in this town, running the book and tea store and getting along with her new cat Bob. She also makes some new friends, meets some of the town residents and even encounters two old friends again. There is a hint of possible romance as well. Then there is the magical thread running throughout the book as Phoebe slowly comes to terms with the fact that her aunt was a witch and she is one too. It really made for a great read and I am looking forward to the next book already!

The paranormal aspect is a bit slow to progress in this book, but I thought it worked well and nicely progressed alongside the other story threads. I liked seeing Phoebe figure out more about her aunt and her magic. The magical teas were fun to read about and then seeing Phoebe discover her own powers was great too. I like the way the magical aspect played a role in the mystery as well. I am eager to see how this progresses over the course of the series.

To summarize: This was a great read and a solid start to this new series. Steeped to Death hits all the usual cozy tropes and manages to feel fresh as well. I liked following Phoebe along as she settles into the small town where her aunt used to live and how she has to figure out a mystery as well as discover she’s a witch. The book had that cozy small town vibe and I enjoyed seeing Phoebe find her place and meet some people here. The mystery was a good one and I liked all the discoveries Phoebe had along the way. The reveal made sense and seemed logical and still managed to take me by surprise as well. I liked how the paranormal aspect slowly progressed throughout the book and played an important role as well. I am looking forward to the next book!

4 responses to “Review: Steeped to Death by Gretchen Rue”