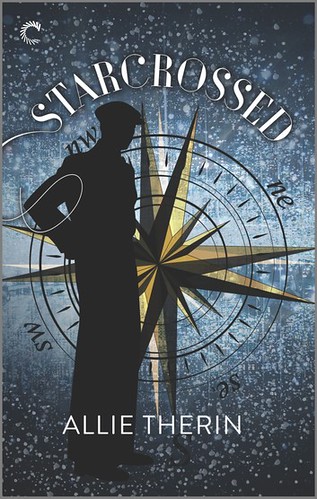 Blurb:
When everything they’ve built is threatened, only their bond remains…

For Arthur, there’s only Rory. But keeping the man he’s fallen for safe is another matter altogether. When a group of ruthless paranormals throw the city into chaos, the two men’s strained relationship leaves Rory vulnerable to a monster from Arthur’s past.

With dark forces determined to tear them apart, Rory and Arthur will have to draw on every last bit of magic up their sleeves. And in the end, it’s the connection they’ve formed without magic that will be tested like never before.

This book is approximately 85,000 words

Starcrossed is the second Magic in Manhattan book. The first book Spelbound was one of my favorite reads of 2019, so I was quite excited for this second book. And I am happy to say this book was just as good. It’s an amazing read and I like the blend of romance, paranormal and historical elements. And all of those elements really get the attention it deserves.

It starts shortly after the end of book 1. Arthur and Rory are staying at the house of Arthur’s brother so they can have a break of the city. While there they get word of things in New York that are going on and Rory gets into some trouble while trying to help Pavel. After a bit they are thrown headlong into another adventure. One of Arthur’s brothers is having weird nightmares, a lawyer is asking weird questions and Rory and Zang both see weird phenomena while using their abilities.

I liked how the story tied in with the story in book 1. It felt like a smooth continuation and a new part of the story at the same time. Some of the same side characters and baddies are present, although the focus has shifted to a new relic in this book. I also like how some of the antagonist characters really seem bad, there are also those who are more gray and don’t seem fully bad, which is interesting. The book has a solid pace and kept my attention for the whole book. I kept wanting to keep reading to find out what happened next.

The romance is one of my favorite parts of this book. Arthur and Rory are just so cute together. It’s this opposites attracts type of romance with Arthur being a rich guy and Rory the opposite of that and this has some struggles. As Rory can’t be seen in Arthur’s presence too often or entering his house. They definitely have some issues to work through, but I also like how we see them being a couple in this book in those early stages of a relationship. The issues they run into might be tough to deal with, but are never blown out of proportion and I like how they resolve what comes on their path. Like the whole Arthur’s ex plot line, which was resolved surprisingly well. And I just love seeing Arthur and Rory together and you can really feel how much they care about each other. They make for an awesome couple.

I also really like both of the main characters. We get to see both Arthur and Rory’s point of view and I feel like we really get to know them. From the way Arthur is pulled in different directions between what he wants and what his family expects. Rory who still believes he has to fend for himself and has difficulties accepting gifts. To the way they interact or handle things. How they care about each other and also other characters and the lengths they go to help them. They are both awesome characters to read about and I really like them.

To summarize: this was an awesome sequel, just as good as book 1. I liked following Arthur, Rory and their friends again in this book. The story is a continuation of the plot line in book 1, but with a slightly different focus and a new relic. I really liked this and it felt like a very smooth way to continue the story. The plot and characters kept my attention and I really enjoyed this book. The romance is one of my favorite parts. Arthur and Rory make for such a great couple. Both are likable and interesting characters and I feel like we really get to know them. They are great together and I like how we see them in that early stage of their relationship with how they’re still figuring out some things, but also are growing really close already. The paranormal and historical aspects are really well done and are an integral part of the story. The historical setting really comes to live and I like how much the paranormal aspect part is of the story.