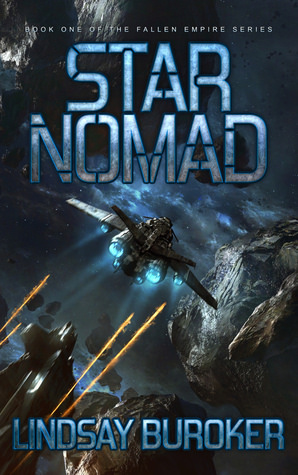 Blurb:
The Alliance has toppled the tyrannical empire. It should be a time for celebration, but not for fighter pilot Captain Alisa Marchenko. After barely surviving a crash in the final battle for freedom, she’s stranded on a dustball of a planet, billions of miles from her young daughter. She has no money or resources, and there are no transports heading to Perun, her former home and the last imperial stronghold.

But she has a plan.

Steal a dilapidated and malfunctioning freighter from a junkyard full of lawless savages. Slightly suicidal, but she believes she can do it. Her plan, however, does not account for the elite cyborg soldier squatting in the freighter, intending to use it for his own purposes. As an imperial soldier, he has no love for Alliance pilots. In fact, he’s quite fond of killing them.

Alisa has more problems than she can count, but she can’t let cyborgs, savages, or ancient malfunctioning ships stand in her way. If she does, she’ll never see her daughter again.

It’s so satisfying when you can figure out exactly what type of book you want to read and then be able to read that exact type of book. That was what happened when I picked up Star Nomad. After reading the novella Bearadise Lodge by this author I knew I wanted to read more by this author as it fit my reading mood. So I decided to start the Fallen Empire series. Star Nomad was a very entertaining read. It’s a science fiction book with non stop action, a fast paced plot and likable characters.

Something about Star Nomad just was perfect for my current reading mood, the characters are great to read about, but there is little drama. The story was fast paced, but not rushed and there was a lot going on and a lot of action throughout the book. It made for a very exciting and engaging read. And even with all the trouble the characters found themselves in, I found the book as a whole still have a very hopeful and uplifting vibe. The blurb describes it as for fans of Firefly and Star wars and in a sense I think that sums it up pretty well. It had the quirky cast of characters like Firefly and the action packed plot lines like in Star wars.

The story follows Captain Alisa Marchenko, who got stranded on a desolate planet after the Alliance won the war against the empire. Now that she’s recovered from her injuries she wants to make her way back to her daughter who is on another planet. To do this she returns to the ship she sold before she joined the war. And that’s where the trouble starts. She ends up with some crew and passengers. And they grow into the main cast of characters for this book. I loved learning about the characters and their quirks.

I think Alisa made for a great main character. With how she has this drive to return to her daughter, which gave her a clear mission, but she also was willing to make some detours for her passengers along the way. Then there is her belief in the alliance their mission, her love for flying and also how she returns to the ship she didn’t want to ever see again. She has her own brand of humor and I liked how she is optimistic and capable. She also seemed pretty open minded. And she quickly grows to care about the passengers and crew she takes on and quite willing to help other people.

Then there are the side character like Mica, Yumi, Beck, Leonidas and Alejandro mainly. Mica is the pessimistic, but capable engineer and friend of Alisa’s. I liked how her pessimism contrasted with Alisa’s optimistic outlook. Yumi is a passenger with her own quirks and I thought she was quite likable. Beck is the person they hire for security and he knows how to fight, but has other dreams too, which I thought was a fun twist. Leonidas stays a bit of a mystery, but we get some hints about his character and I am intrigued to learn more. Alejandro is still a bit of a mystery too and I am curious about that object and mission of his. There is a hint of a possible romance, but that’s all it is for now.

I found the world building quite interesting. we see a galaxy right after the fall of a big empire. People are stepping into the void, but there also is more unrest and chaos than before. Through dialogue and the main characters inner musings we get a bit of a feel of what the empire was like too, but it still mainly is limited to some big lines. I kinda like world like this that are set after a big event as you can get a feel of the big event and also how the world is adapting after it. Besides that the world building is still pretty limited. There are a few planets we hear about and some other factions and people. It’s obvious there is much more to this world, but we will discover that in later books probably.

To summarize: I had a great time reading this book. It was action packed, fast paced and had a fun cast of characters. Everything that can go wrong goes wrong, there is a ton of trouble they run into, lots of action and danger, but at the same time the tone is still hopeful. Which is exactly the type of story I wanted. I liked main character Alisa, with her own brand of humor, how she was capable and optimistic and her love for flying. The side characters were interesting too and they all had their own quirks and personalities. They made for an interesting group of characters and I look forward to get to know them better. I also thought the world was interesting with how the story takes place after the fall of the empire and we see a bit of how the world is doing now. I hope to see more of the world in future books. All in all this was a thoroughly entertaining read and I had a great time reading it. I hope to continue with book 2 soon.