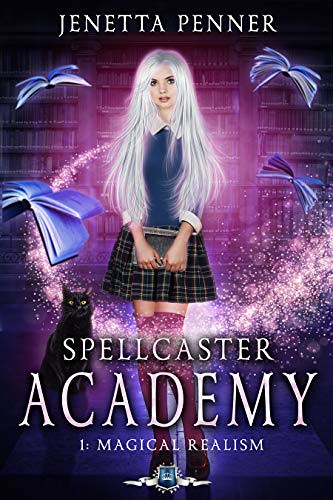 So, when opportunity knocks in the form of an address and a plane ticket from a mystery aunt, Josy jumps at the chance to start a new life with her black cat, Nine.

There’s no aunt, no house… just a weird junk shop in a dark alley.

Into a world she never knew existed.

Josy finds herself enrolled at the hidden Spellcaster Academy…with a now talking cat.

With no friends and no magical abilities, Josy can’t stay at the academy if her hot, Enchantment 101 student-tutor, Aspen Rivers keeps refusing to help her pass.

Just when things couldn’t get worse, she may have discovered dark secrets about the academy…

Secrets which could lead to a worse fate than expulsion… one that threatens both The Side of Magic and the regular world she grew up in.

Academy books seem to be all the hype lately and while I always enjoyed academy type stories, I haven’t picked one up in a while. Something about Spellcaster Academy kept catching my attention, so when the author offered review copies I decided to give it a try.

Spellcaster Academy is a fantasy academy series that follows the story of Josy Barrows. It’s a series with shorter books or episodes, which so far seems to work here. This episode had a clear begin and end and the length seemed about right, although it did feel a tad too quick paced at times. Josy Barrows has no one left, she’s an orphan and her only living relative her grandma just died and now all she has left is a mysterious letter about an aunt. There is no aunt and instead she finds herself in a magical world and enrolled in a magical academy. It quickly turns out she stands out a bit because of her white hair. She can’t do magic at all, but at least she has a talking cat and a ghostly roommate.

Spellcaster Academy was fun enough, but it just didn’t pull me in. There was nothing that really kept my attention. But at the same time there also isn’t anything that really didn’t work for me. It’s just one of those just okay reads, that were fun enough to read, but nothing outstanding. It was a bit typical or cliche at times, fitting nicely in the tropes you expect from an academy book. The main character is a bit of a special snowflake. But there were some unique twists too.

I was afraid this book would be merely an introduction to the series with the episode format, but the pacing was quite well done and there is a scene toward the end that I hadn’t expected in book 1 and which upped the danger and tension. The pace is fast, but didn’t feel rushed most of the time. It does goes quite fast and there are plenty of subjects that aren’t fully explored yet, but as this is just the first episode I am sure that will be more explored in later books.

I thought Josy was a fun enough main character. She doesn’t know she can do magic and knows little abut her parents. She finds out her cat can actually talk and that there is a whole other world of magic. Then she learns even more secrets and there are some reveals when she spends some time at the academy. I like how she wasn’t as good at magic at first, but by the end of the book something happens that makes me think she will be quite the special magic user after all sadly. She seemed open minded enough and I like how she went after what she believed in, but most of the time she was quite a normal person actually.

I like Nine, the talking cat. And then there is Josy’s roommate who seemed nice too, but I have the feeling there is much more to her than we know so far. There also is a teacher who seems quite friendly. And there is a love interest for Josy. The love interest Aspen is a bit of an outcast too and seems willing to help her. Their relationship even progresses quite a bit in this book already.

It’s hard to say much about the world as with everything going on and the fast pace there isn’t as much room for world building. I liked the idea of the two separate realms and how people can travel between them. Everyone seemed to have a different magical specialty, which was an interesting touch. Besides that it’s hard to fully get a grip on things yet. The world building is quite limited, but there is enough to follow the story, just not enough to make the world come alive yet.

To summarize: this was a decent start to this new series. It was a nice enough read, but didn’t fully pull me into the story, then again there also wasn’t anything that really bothered me. The pace is quite fast, but didn’t feel too rushed most of the time. There is a big event at the end of this book, which I hadn’t expected and it was quite interesting. Josy was a nice main characters to read about, although she is a bit of an outcast and special snowflake. I liked her cat Nine and her roommate seemed nice too. There is a love interest and their relationship progresses a bit too. The world building is quite limited, but there’s enough to understand the story, just not enough to have a clear picture of everything yet. If you enjoy fantasy academy style stories this one might be for you.

What’s the most recent academy style book you read?