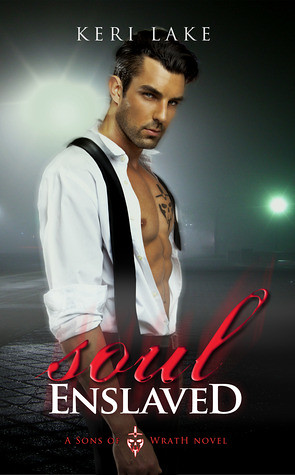 Blurb:
Imprisonment in Obsidius. Enslavement to a soul-sucking succubus. A reproductive cycle that’d send a sex fiend running into the arms of celibacy. Given the choice, most demons would opt for death.

Gavin, eldest son of Wrath, has been sentenced to all three.

When the succubus decides its time collect, though, he fears his nightmares have only just begun.

And Sabelle’s timing couldn’t be worse.

With a bad case of uncontrollable lust, thanks to his Savidon, the last thing Gavin wants is a vengeful succubus stoking his darkest desires, but debts must be paid—he just didn’t bank on enjoying his punishment so much.

Because the swinging bachelor may have found his perfect mate in the sexy seductress.

However, just as things seem to be looking up, past sins resurface, plunging the two into a deadly game of power and deception. As their worst fears merge into one unexpected threat, Gavin is determined to protect Sabelle and win her freedom.

I was in the mood for a good Urban Fantasy or Paranormal Romance book so I decided to start the new year with Soul Enslaved. I always liked Gavin as a character in this series, so I was excited to get his point of view in this book.

Soul Enslaved is a fairly long book with it’s 460 pages and it took me quite some time to get through it. Nevertheless it isn’t boring and kept my attention the whole time. There are a few parts which are a bit slow, but enough is going on. The main storyline focusses on Gavin and Sabelle, but there were lots of other storylines as well. Some storylines only played apart now and then and there were even some storylines at the beginning were we didn’t hear anything about in the last half, but I believe they are set ups for future books. Keri masterfully manages to give you a story in each book, while furthering lots of other plot lines as well. It could be overwhelming at times, but it also gives this series a feel of continuity, things that happened in the last book are furthered here and each plot has a role to play.

There was a part towards the end of the book that was a bit difficult to read, I am not a big fan of too dark books and for a few chapters it dipped into the too dark territory for me. I read over a few scenes and almost had tears in my eyes once. There is once scene and what happens is just so horrible I don’t know how the character can ever learn to deal with it. It was horrible. And it made me doubt for a second whether I wanted to continue, but it got a bit lighter after that again and I found I could continue.

The characters are well developed in part also because we hear about each character in the previous books already. I really enjoyed getting to know more about Gavin and sabelle. Gavin really is a gentlemen and the big brother in the group and it was fun to see him fall head over heels for Sabelle. I really liked Sabelle as well, she was a great female character. She is so fiercely protective of her children and is fighting to give them a better life and I really admired her for that. beside the two main characters we also get a few new side characters, like Sabella her twins and Sabelle her sister. And then there’s the cats of demons and side character we got to know in previous books who each make an appearance. The story however is really focussed on Sabelle and Gavin, especially at first, so the other character mostly play a side role. Towards the end of the book some things are set in motion for future books and the other character made more frequent appearances.

The romance was done well and I really liked Gavin and Sabelle together. The only scenes that rubbed me a bit wrong was when Sabelle doubted herself and what they had. But overall they had great chemistry and I enjoyed reading about this couple and routing for them to get their happy ending.

The world building in this series is really impressive, it feels like everything is thought out and there’s a word list at the beginning of the book to help make sense of some unique words. Every time I read a book in this series I am impressed again by the world building. Sure it’s about the romance, but there’s so much more. Everyone has a place, there are laws and rules that govern this world, alternative realms, everyone has a past and it just feel so wonderful when everything fall on it’s place and everything makes sense.

To conclude: I really enjoyed this book, the pace can be a bit slow, but there was always enough going on to keep my attention. There were a few chapter which were a bit too dark for my liking and I had trouble reading them. The two main characters of this book were likeable and I really felt their romance. The earlier main character make a few appearances and the usual cast of side characters is present in this book as well. And I am so impressed by the world building in this series! Looking forward to see were Keri Lake takes this series next!