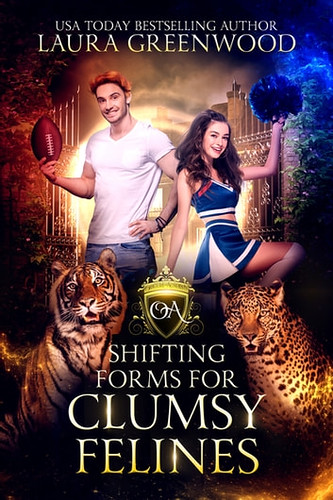 Blurb:
When she arrived at Obscure Academy, Krissi promised herself she’d focus on her studies and cheer practice. She wasn’t going to worry about boys or the fact she’s less than graceful in her leopard form.

Everything changes when she shares an accidental kiss with her flatmate, and despite every attempt to stay away from Jeremy, she keeps finding herself drawn back to the tiger shifter.

Can Jeremy convince her to give their relationship a chance?

Shifting Forms For Clumsy Felines is a light-hearted shifter academy m/f romance set at Obscure Academy. It is Krissi and Jeremy’s complete story.

Shifting Forms for Clumsy Felines is a fun and lighthearted paranormal romance book. It follows mostly the point of view of Krissi, who is attending Obscure Academy, we get to know her and some of her flatmates. Krissi wants to focus on cheer leading and studying, but gets distracted by one of her flatmates Jeremy and they slowly develop feelings.

I like to pick up one of Laura Greenwood’s books when I am in the mood for a fun shorter read in between other books. And this book sounds the right mix of fun and lighthearted that fit my mood. That did seem indeed to be the case. The pace was well done and I always appreciate how every scene and chapter has a goal and moves the plot forward in one way or another or shows us something more about the characters and their relationship.

I liked Krissi, I thought her dedication to cheer leading and studying was admirable. She could be a bit stubborn, but I thought that felt realistic. She kept trying to keep Jeremy as just a friend, not admitting to even herself she wanted it to be more. I also thought it was great how she actually explained this to Jeremy. I liked how Jeremy appreciated her boundaries and also how he stuck around and was there for her. There are a few chapters from his point of view as well that gives some additional insight in his character. I thought Jeremy and Krissi made for a great couple. I would’ve liked to see more of them as a couple, but even though they only become a couple late in the book there are plenty of scenes with them together. Hopefully we see more of them in future books as well.

Besides Krissi and Jeremy there are some fun side characters. Krissi quickly makes a good friend who is also a cheer leader. I liked getting a feel for Krissi’s flatmates and I think most of them will get their own story too. I thought it was a fun set up with them all sharing a flat and I am curious about Bernie the vampire, who has a nice scene together with Krissi that reveals some of her struggled. I look forward to reading more stories in this series.

This book is very light in the paranormal aspect, but I thought that worked well. I thought it was fun to read about a shifter who rather spends time in her human form and is much more graceful as a human than as her feline form. There are a few scenes with them as shifters, but mostly it’s more the slight paranormal vibe with most characters being a supernatural species of some sort.

To summarize: I had fun reading this book. Shifting Forms for Clumsy Felines is a fun and lighthearted paranormal romance read. I liked the building romance between Krissi and Jeremy. Krissi wants to focus on cheer leading and studying, but finds herself distracted by Jeremy after all. I liked how they communicated and seeing them eventually turn into a couple. There are plenty of interesting side characters that I look forward to reading more about. The paranormal aspect is pretty light, but definitely present with most characters being a supernatural species of some sort. I liked the concept of Krissi being more graceful as human than as a feline.