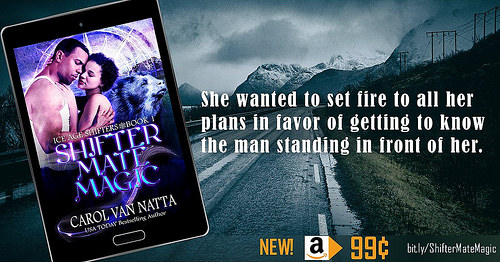 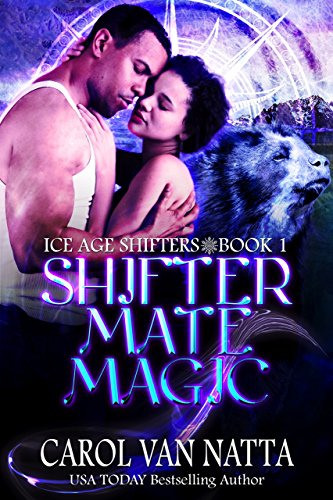 Blurb:
A lonely bear shifter meets his mate. She’s running for her life and doesn’t have time for romance.

Pregnant Jackie Breton just escaped from a corrupt feline pack intent on selling her half-shifter baby to the highest bidder. She’s smart, independent, and has a desperate plan to keep her baby safe: Get away from the pride as fast and far as possible.

Trevor Hammond, prehistoric bear shifter, has been rejected by everyone in his life for… being born, basically. Well, except for the beloved aunt who raised him. He’s built a career as an independent trucker, but life would be much better with someone he can hold in his arms and claim as his own.

When Jackie meets Trevor at a truck stop, his bear demands he help her. His aunt even calls with a dire warning: Get Jackie to the magical sanctuary town in Wyoming before she’s killed.
Jackie thinks he’s sexy as hell, but too good to be true. She doesn’t trust shifters. With the feline pride hot on her trail, however, Trevor and the quirky town of Kotoyeesinay might be her only chance for survival. Even Trevor’s indomitable bear may be no match for the dangerous enemy seeking retribution. 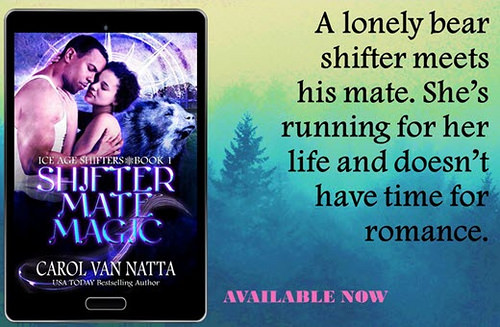 I recently started the sci-fi series by author Carol Van Natta and the series totally grabbed my attention. So when I heard she was writing a new Paranormal Romance series I jumped on the chance to read an advance readers copy of the book. This book was so good! I had a lot of fun reading it and I am already looking forward to the rest of this series!

Shifter Mate Magic is one of the best shifter books I read on a long time. It has a rich world filled with magic that we’re slowly getting intruded to, smart and capable characters that aren’t afraid to ask for help when they need it, an unique take on shifters and magic and a great and believable romance.

This book follows the story of Jackie and Trevor. Told in dual point of view we get both their sides of the story. Jackie is running from a corrupt shifter pack who wants to sell her unborn baby to the highest bidder. She has nowhere to go and her plan is to keep running as fast and far as she can and hope the shifter tribunal might be able to help her. Then she meets Trevor and despite their instant attraction Jackie knows she doesn’t have time for romance and continues on her journey, but when she lands in a pickle later on she has no one to ask for help, but him.

I liked reading about Jackie and Trevor, both are smart and capable characters. I also liked how different they were and similar too in other aspects. They clicked immediately and I liked seeing them interact with each other. They have an instant attraction, but also much more. They acre about each other and work well together. I also appreciated that getting to safety took priority over exploring the romantic tension between them when the danger increased. While at the same time the romance did got furthered a long a bit as they got to know each other a bit while trying to reach safety. I also thought it was interetsing Trevor was a trucker as I don’t think I’ve read of anyone with that job before and it was fun how his job played a role in the story as well. There are some great scenes with the two of them and I really liked how much they cared about each other.

The romance between the two of them develops pretty fast, but it didn’t feel rushed to me. They just fit together really well and they spend a lot of time together in a few days where they got to know each other. They also stood by the other through some tough times and I think that helped grow their romance pretty quickly. They also have the mate bond, but only Trevor feels that at first and it doens’t get solidified until they actually mate. I really felt their romance and thought they were great together. They really cared about the other, quickly opened up and were honest with each other and I just enjoyed reading about them a lot. I am hoping we’ll be seeing more of them in later books.

The world building was well done. It’s clear the author knows how her world works really well, but we don’t get all that information at once. It was nicely done how we got pieces so you weren’t overwhelmed with all the information and only got the parts relevant for this story. Although I wouldn’t have minded even more world building, but that’s because I am really intrigued by all the paranormal creatures we meet.

I liked the unique twist on shifters in how they had magic to shift and some had some free magic to use for other things. I also liked Jackie’s magic and the things like the maps she created, it was original and very handy. And the whole ice age shifter thing was great too. I liked how it was unique to have some shifters shift into ice age creatures instead of modern age ones and a hint later in the book hints that there is some relevance of this as well. Later in the story you realize there is so much more to this world and while we get introduced to a bunch of creatures, it never gets overwhelming. I can’t wait to read more of this world and the characters in it.

To summarize: I had so much fun reading this book and really enjoyed the story of Jackie and Trevor. It’s one of the best shifter stories I read in a long time and I can’t wait to read the rest of the series. I really like Carol Van Natta’s writing style and the story and characters grabbed my attention from the start. I liked Jackie and Trevor both as individuals and as a couple. I liked how both were smart and capable and I liked how the romance took a bit of a backseat when the danger grew. The author gave an unique twist on shifter stories with the addition of ice age shifters and how the magic works, which was great! And it seems there is a lot more to this world still to find out. I can’t wait for the next book in this series! I would recommend this one to everyone who likes a good paranormal romance book with an unique twist!

Only 99cents for a limited time! 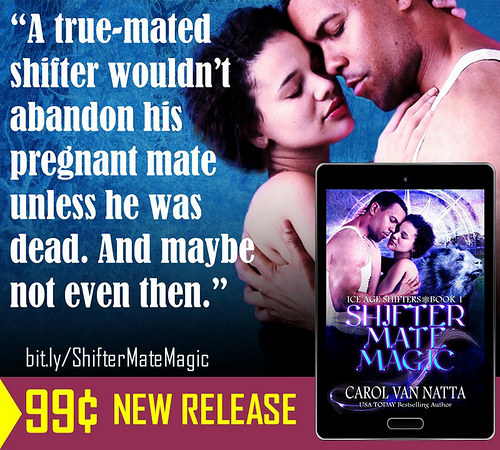 Do you like shifter romances? What’s the last book you read with a shifter as main character?