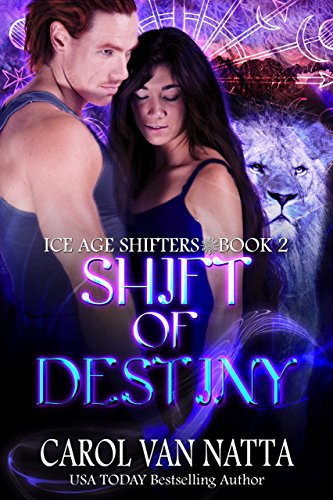 Blurb:
There is no such thing as magic, or sexy shifters. Or… is there?

Moira Graham’s car breaks down in the tourist town of Kotoyeesinay, Wyoming. She’s on the run. Again. A crazy billionaire wants to possess her ability to predict the future, but it’s not a “gift.” It’s simple guesswork. Magic doesn’t exist. And this quirky town—which uses elves, fortune tellers, and fairy-tale gimmicks to draw tourists in—isn’t helping.

Roving carpenter Chance McKennie is a prehistoric shifter on the lookout for a mate. Unfortunately, people fear his lion, and don’t stick around long enough to get to know the man. He thought his luck would change in Kotoyeesinay, but his skills aren’t needed in this magical sanctuary town with creatures of myth and legend on every block.

When Moira bumps into him, she’s almost willing to believe in the magic of this place. But it’s going to take more than a red-hot handyman and some glowy lights to save her from ruthless hunters.

Chance is determined to protect his mate and help her find the magic in her blood. But even a top predator can’t guess the lengths to which a desperate billionaire will go to get what he wants.

I really enjoyed book 1 in this series and when I received a copy of this one I started it as soon as I could. Shift of destiny is just as good as book 1 and I was quickly pulled back into this world filled with shifters and other paranormal creatures. I am not sure what is about the way this author writes her books, but they manage to hook me every time. Her writing style really works for me. And I love this series so far!

Shift of destiny follows the story of Moira and Chance. Both have been on the move for a long time. Moira is running from someone who wants to own her for her psychic gift, but Moira doesn’t believe in magic and thinks her magic is actually some lucky guesses. Chance has been looking for his mate, never staying anywhere long. When they meet each other in Kotoyeesinay the sparks fly and their immediately attraction to one another quickly blazes into more.

The main plot line is focused on their romance and the dangerous man who is after Moira. There is some danger and action involved there before things get resolved. I have to admit that the way something was resolved at the end seemed a bit too easy, but I guess the magic made it all look real. This gives us another piece of information of the bad type of people who inhabit this world and what they do.

I liked both main characters. Moira has done a lot of different jobs and I liked how her knowledge of the varied things she learned come in handy multiple times. She has learned to trust no one, be on her guard and move at the first sign of trouble. She never had the time to stay in one place for long. She knows how to take care of herself, but also doesn’t push help away when it came her way, which was a great combination or characteristics.

It was interesting how she didn’t believe in magic and explained the magical things away with mundane explanations. But when Chance opens her eyes to what is really around them, she slowly dared to believe in her magic. The change in her was done believable and realistic, which is so hard to achieve in paranormal books. And I loved her unique brand of magic, it was so interesting and unique.

Chance has left his family as his parents their packs didn’t know what to do with his unique beast. He always has been alone and traveling a lot. He is handy and likes to build things, which was fun to read about. But in Kotoyeesinay there is no one who needs his type of work, so he plans to move onward, but then he meets Moira. He was protective of Moira, but also admired and appreciates her expertise and opinion, which I liked. I also liked how he wanted to be truthful with her and at the same time tried to tell her things bit by bit so as not to overwhelm her.

The romance in this book develops quickly and it doesn’t take much time before they share their first kiss and then more. I really liked these two as a couple, but wouldn’t have minded a few more getting to know each other scenes before they reached the I love you stage. But at the same time they fit so well together and work so well together, it’s hard to really let that bother me. They really made for a great couple.

There also is a fun appearance of the daughter from the couple of book 1. As there is a lot of years between the two books, the daughter of the couple from book 1 is now an adult and she plays a role later in this book where she explains some things to Moira. It was fun to have the book tie in with book 1 on that point. And ofcourse the town and some of the side characters that were part of book 1 also play a role here as well. I wish some of the side characters would get their own story as there are some great side characters.

I loved returning to this world Carol Van Natta has created. There are shifters, ice age shifters and a lot of other paranormal creatures. In this book a lot of the story takes place in and around Kotoyeesinay and I enjoyed spending more time in this quirky magical town. In the first book they only arrive in the town pretty late in the book, so it as fun to have this book take place here for the most part. There is more we learn about the ice age shifters as well as other paranormal creatures and magic.

To summarize: I loved returning to this world with ice age shifters that Carol Van Natta has created. I had so much fun reading Shift of Destiny and I just wanted to keep reading and figure out what would happen next. Moira and Chance are both likeable characters and I liked how realistic they felt. They both haven’t had the easiest life, but things sure go better once they meet each other. I liked them together, although the romance did develop a bit fast. They are a great team and I liked how they dealt with the challenges on their way together. I really liked seeing Moira go from not believing in magic to slowly accepting that part of herself, the change felt very realistic and believable which is rare to find in a paranormal book. I liked learning more about this world, the shifters and the magical town of Kotoyeesinsay (and I finally know how to pronounce it!). I really enjoyed this book and the end gives a small hint of what I think will be the focus of the next book!

What’s your favorite series with shifters?

8 responses to “Review: Shift of Destiny by Carol Van Natta”