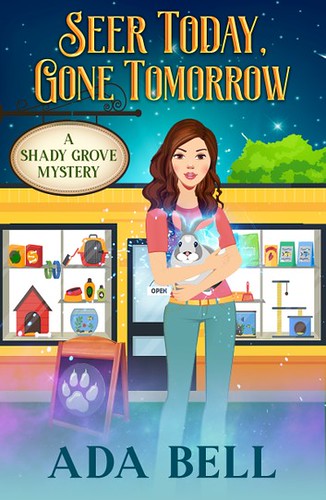 Blurb:
Just when Aly finally identified her sister-in-law’s killer, they got away—with a hostage.

Aly’s on the case, but leads are few and far between. Meanwhile, another mystery arises: what do you get a psychic toddler for his fourth birthday? Aly wants to make her nephew’s day, but the quest for the perfect gift skids to a halt when she finds the pet store trashed, a trail of blood, and the owner missing.

To make matters worse, someone powerful has cursed the residents of Shady Grove. Aly’s powers vanish. Without her psychic gifts, how will Aly find Katrina’s killer and save the pet store?

I really like this series and am always excited when a new book releases. Seer Today, Gone Tomorrow is the fourth book in the Shady Grove Psychic Mystery series following main character Aly who is a psychic who sees visions. Each book has it’s own mystery as well as a larger mystery that continues throughout the series about who murderer her brother’s wife.

Unfortunately I didn’t enjoy this one as much as some of the previous books. I wasn’t as invested in the mystery and I usually like missing person mysteries. To me it didn’t make sense why Aly got involved and then there’s the bunny she takes from the pet store and the whole thing just felt off. Usually I am all for pets being in books, but for some reason the bunny annoyed me, Aly kept having to deal with the bunny and on top of that he didn’t seem cute and I kept wondering what was up with the bunny. The bunny is the reason why Aly tries to find the missing pet store owner so she can return it, but it just felt off. Why not leave the bunny in the store with the other pets who the local vet is taking care of?

This is one of those books that gets better at the end when everything gets revealed, but also worse at the same time. It made me feel some of the things Aly did in this book were a bit unnecessary in the grand scheme and others feel way more revelant. I also managed to guess one of the twists as it seemed so obvious to me somehow. My favorite part of this book was seeing how the mystery progressed of who murdered the wife of Aly’s brother. This mystery kept popping up and slowly progressing throughout this book and there are some nice twists. I really like seeing this bigger mystery progress throughout the series and the way the characters are getting closer to solving it all.

Due to some events in this book Aly doesn’t have a lot of visions in this book and I found that I missed that. Yes it made sense, but what I enjoy about this series is how Aly uses her physic powers to solve the crime and how this gives her an unique way to solve these mysteries. With that missing it felt she had less reason to get involved and her sleuthing felt more awkward as she never had to investigate this way.

This book did add some things in terms of world building and I feel like I am more clear about what are witches and psychic’s. Even though there’s still plenty that’s a bit vague or what we don’t know the extend of. Due to this one of the twists in this book was possible as it never was clear that wasn’t possible. We also see a bit more of witches and their spells and I liked seeing a certain witch we met in the novella again.

To summarize: This is a great series and while I enjoy this series this book unfortunately wasn’t my favorite. I struggled a bit with the mystery in this book and the way Aly got involved. As well as the weird and annoying bunny she takes care of for reasons that didn’t quite make sense to me. The set up and Aly’s involvement felt a bit off and forced to me. I did like seeing how the overarching mystery about her brother’s wife who got murderer progressed and the new bits we learn. There are some interesting developments for that mystery. The ending has some big reveals which explains a lot of the happenings, some things make more sense and other things feel even more forced now that we know why they happened. I was sad that there weren’t as many visions in this book as I feel that’s one of the things that make this series fun and the unique way Aly can investigate these crimes. There is more we learn about witches and psychics and their powers. I look forward to reading the next book and seeing how this all gets wrapped up as I think that’s the last book.