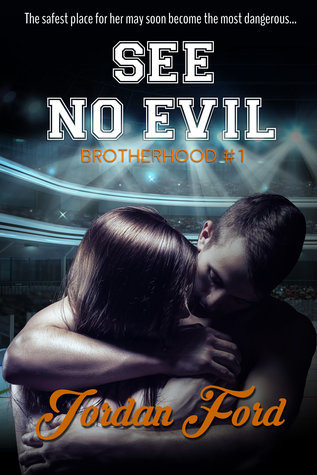 Blurb:
All Christiana wanted was a little flirty fun.
What she got was a one-way ticket to her own personal nightmare.

Her friend is dead…and she knows who did it. Now a key witness in a murder trial, she’s been hidden away in the one place no one will think to look for her: Eton Preparatory School for Boys.

It’s a stupid move. Insane. But she doesn’t have a choice.
Instead of completing her senior year with the popular crowd, she’s being forced to hide in a school with exactly zero XX chromosomes. Even worse, she’s somehow supposed to act like the Neanderthals walking the halls.

But then she meets the guys next door—the smoking-hot ones. And it doesn’t help that one in particular could unravel her in a heartbeat… and potentially blow her cover. How’s she supposed to resist Trey Calloway, the star hockey player who never backs down from a fight…and who never takes no for an answer?

She’s supposed to be focused on staying safe, not on the guy who’s getting under her skin. Her chilling past isn’t going to suddenly disappear.
In fact, it might just be catching up with her.

My Review:
Somewhere on the internet I stumbled upon this book, the blurb immediately grabbed my attention and I knew I wanted to read it right now. And then I did something I rarely do, I bought the book and started reading it immediately. It was great! And the best part is that this book was exactly what I was in the mood for and I really enjoyed it. It was such a fun read and I got easily into the story. It was really an addictive read and it makes me wonder why I don’t read more YA contemporary romances.

The main plot line of the book is that Ana/ Chris has seen a murder, but the murderer knows she saw. So she has to go into hiding as part of witness protection and has to stay in an all boys school disguised as boy. I really liked the plot line and seeing it all play out. The premise might be slightly unrealistic, but Jordan Ford totally makes it work and writes in a way that felt realistic. This book has a bit of romance and a bit of suspense/ mystery and it was nicely blended together. I really had a lot of fun reading this one and didn’t want to stop reading whenever I picked it up. I did feel the ending was a bit too open, but as there will be two more books in this series I hope we get more answers in that one.

Chris was such a great main character to read about, she believes into doing the right thing even though it’s difficult. She really struggles at the all boys school at first and I thought that was realistic. She has to pretend to be a boy, the school bully picks her as his next target and she can’t be herself or trust anyone, so she really has a hard time at first. She has to make sure no one finds out her secret and stay safe, but it’s hard when all she wants it her normal life back even though that’s no longer an option. And she meets Trey who she slowly falls in love with and that might be even more dangerous as she has to pretend with him too.

I liked how the romance, it was sweet and there wasn’t a lot of drama. But there were some issues they had to deal with, like how Trey thought she was a boy at first and Chris her secrets about why she’s there. There are some great scenes of them together and I really liked them together. And later in the book it becomes more and more obvious how good these two are together and how much they mean to each other. And while there is romance, it also isn’t the sole focus of the book. The author really struck a nice balance between the different themes.

I really liked the characters in this book, the book focuses on a few important characters and it really worked. It was easy to remember who was who and everyone had their own personality. I liked how close Trey and his friends where and I can’t wait to get the stories of the other two brothers. These three really are like a family and have each others back. I especially liked Riley, not sure why, but he seemed like an interesting character and I liked his personality. I also feel like there’s more to Kade than meets the eye and it seems his story will be next.

To summarize: I am so glad I picked this one up as it was such a great read! It was exactly the type of book I was in the mood for and it hooked me from the moment I started reading. The plot of this one was great with how a girl has to go into witness protection at an all boys school and while the premise might be slightly unrealistic I felt it was written very realistically and it was just so much fun to read. The characters all felt real and came alive. The book focused on a small group of characters, but I did feel like we got a good feel for each of them because of that. I liked reading about Trey and his best friends Kade and Riley, who are like a family. The romance was also well done and I liked how it developed. There’s a bit of suspense and mystery as well and I really liked that aspect and how it added a bit of danger and suspense into the story. Luckily we don’t have to wait long for the next book as I can’t wait to read Kade and Riley their stories!

Have you ever read a book where the main character goes into witness protection?

15 responses to “Review: See No Evil by Jordan Ford”